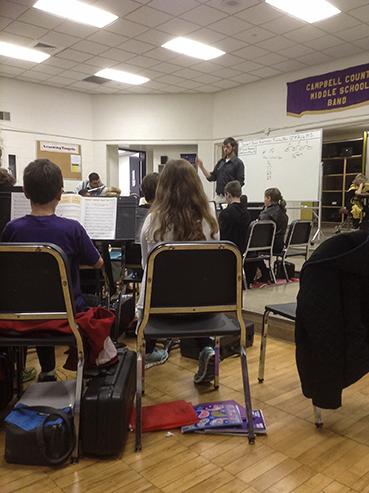 Students sitting in on a music education class at NKU.

Karen Koner, an assistant professor in music education, spearheaded the overhaul of the curriculum. Koner first arrived at NKU in Aug. 2012 and made an immediate push for teaching with a hands-on approach.

“I really believe hands-on is the best way to learn anything,” Koner said.

With 28 students, the 2013-14 school year saw a nearly 50 percent increase. For the coming fall semester, an estimated 40 students will be auditioning.

“Getting students adapted to the classroom experience earlier, they’ll be used to it so the time they start teaching, hopefully they won’t be so overwhelmed that they resign,” said Koner about one of her goals.

Becoming “adapted to the classroom experience earlier” has come mainly from the shift in the field hour experience of students. Originally, gaining 200 field hours teaching and assisting in music classes at area schools was something music education students did on their own time. Now, it is built into the whole class schedule.

Koner says that by doing so, students who plan to teach music in their careers will have a greater understanding of the process before they graduate.

Betsy Williams, a senior music education major who plays violin and viola, recalls Koner’s arrival, adding that this greatly boosted the overall coherency of what she, as a student, was expected to do.

“We knew what music classes to take, but we had no idea what education classes and how things went together,” said Williams about the music education classes, before Koner’s arrival. “There just wasn’t a whole lot of communication.”

According to Williams, the new tactics have been largely beneficial to her sense of self-esteem as a music teacher.

“I’m a lot more confident, in my ability to go out and teach in the schools,” Williams said.

Koner stresses that her primary goal is a rise in job placement for her students upon graduation. Of her six students who graduated last May, one received a job and one went on to graduate school. Koner would ideally like to see those numbers rise dramatically.

Another thing she hopes for in the coming year is to start a Masters in Music Education program at NKU.

“Right now all that’s offered through NKU is the Masters of Arts in Teaching, which is great but it doesn’t really fit very well for the music side of it,” Koner said.

William Kidwell is the band director at Gray Middle School, one of the schools who has worked in tandem with the music education department. According to him, the shorter generational gap between college students and his students has definite benefits.

“I think that when my students see a student teacher, I think it’s easier for them to think ‘that could be me’ rather than some old bald guy like myself,” Kidwell said.

With his 26 years of music teaching, Kidwell says he can speak from experience and give student-teachers pointers and insight into which teaching methods may or may not work so well.

“I taught probably seven or eight years before I even felt like I had a clue to what I was doing,” Kidwell said.

Looking to the future, Koner believes the experience gained from her music education students will greatly benefit them in the long run.

“I think my students will come out more prepared and ahead of the game,” Koner said.