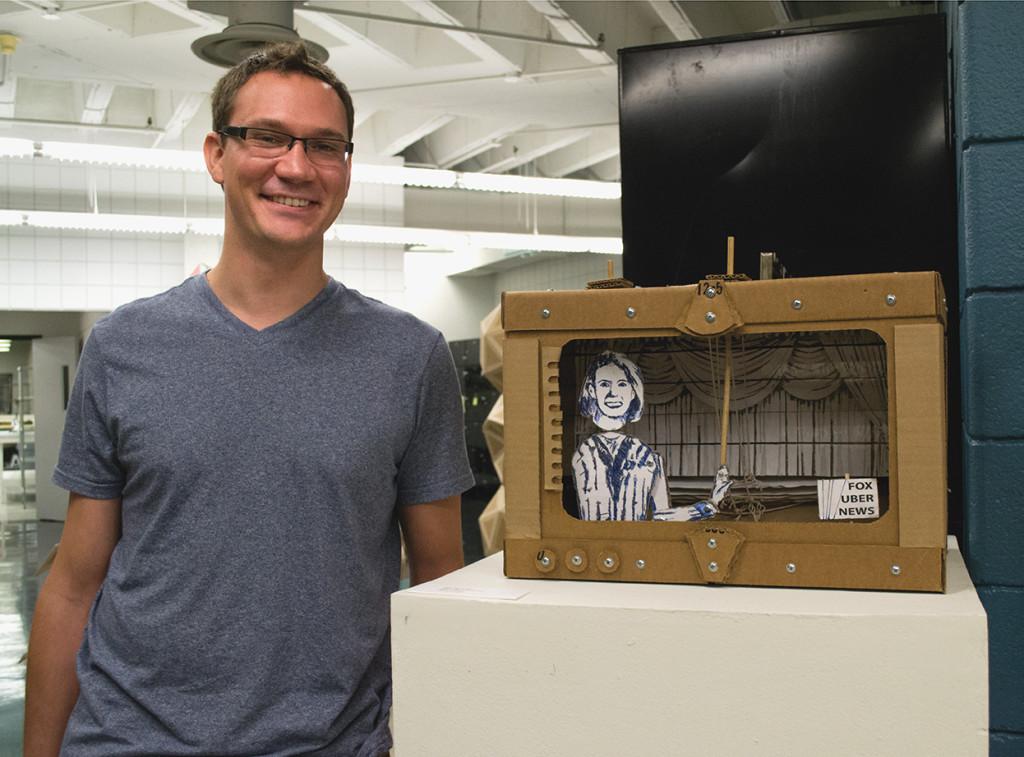 The next time you see an empty cardboard box lying around, try to resist the urge to kick it. Don’t think about it only as a disposable object.

A cardboard box is an environmentally friendly material. Artists can cut, glue, paint, reshape and transform cardboard into three-dimensional works of art.

The Northern Kentucky University Department of Visual Arts is hosting an exhibit by freshman students in the Fine Arts Building. The Foundations Exhibition is located on the plaza level entrance hall and the fourth floor and will run through Sept. 14.

The exhibit includes cardboard sculptures, self portraits and black and white compositions. Students created the pieces in beginner-level art classes.

“We felt that the students worked really hard and there were a lot of beautiful things to pick,” art professor Nicholas Bonner said.

The department began showing freshmen artwork five years ago. The university selects works from each course in an effort to highlight student portfolios, Bonner said.

Teri Wiseman, a visual communication design major, said working with cardboard can be fun, because of its texture and flexibility. Her artwork resembles the natural rock buildup formed by drippings of mineral solutions inside limestone caves.

“I got inspiration from stalagmites,” Wiseman said.

The three-dimensional sculptures can be abstract or take a variety of realistic forms like worms, pyramids or prehistoric birds.

Jim Merritt, a visual communication design major, said he hopes his artwork will make people think outside of the box, in this case, a cardboard box he transformed into a TV set featuring a puppet from “Fox Uber News” channel.

Merritt said he wants to call attention to the ridiculousness of the current political environment in the country. He said he wants people to see a realistic approach to art.

Viewers can also stare at huge self portraits that stare back at them on the fourth floor of the building. The portraits are part of “My Big Head Project,” a group of caricatures based on student photographs.

Another display on the fourth floor, “Understanding Composition,” consists of black and white paper cut and layered in different sizes. Geometric or abstract shapes reveal themselves in the designs.

The Department of Visual Arts at NKU enrolls over 400 students and is the largest undergraduate visual arts program in the Commonwealth of Kentucky, according to NKU’s website.