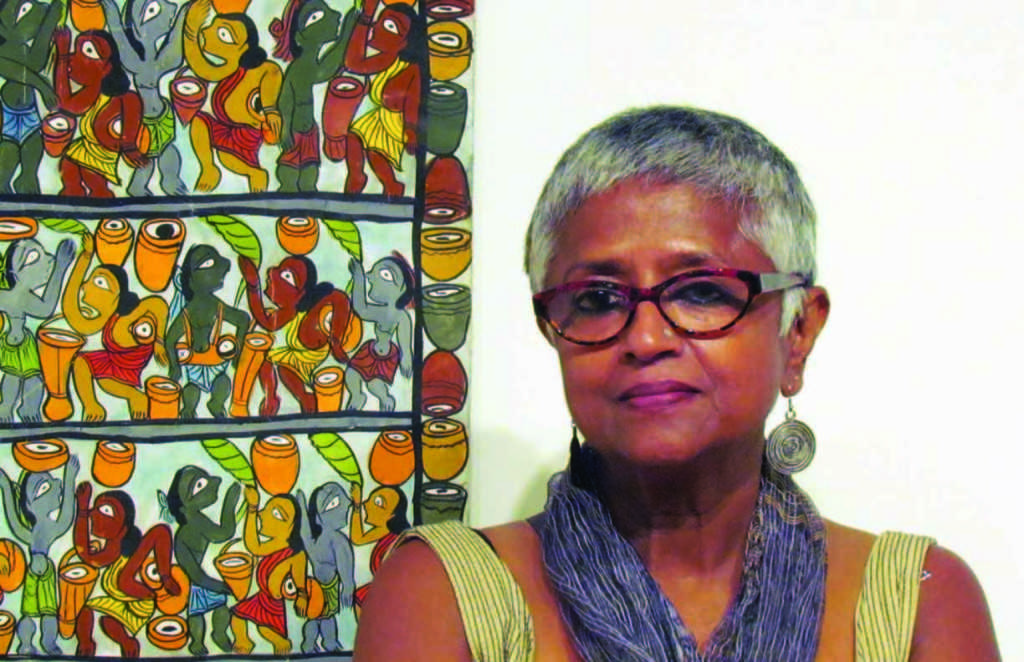 The Northern Kentucky University art galleries in the Fine Arts Building kicked off their yearly art exhibition on Aug. 21 with a showcase of contemporary artwork created by artists hailing from India. The exhibit, titled “The Art of Story Telling: Traditional and Contemporary Works from India,” is a collection of pieces that are owned and sold by the exhibit’s curator, Radha Chandrashekaran.

Chandrashekaran, who received her Bachelor’s and Master’s of Fine Arts from the Art Academy of Cincinnati, taught at NKU last year and explained how most of the artwork being shown is a collection of pieces from a previous showing.

“These were some of the works which were left with me,” Chandrashekaran said. “And I couldn’t ship them anywhere. NKU then asked if I could have an exhibition of these works.”

While all of the artwork is on sale, almost half of the gallery was originally purchased by Chandranshekaran herself to help struggling artists in India.
“When I met them, they were so poor,” Chandrashekaran said. “I felt that they were traditional artists and that I learned a lot from them and that I should help them so I purchased their work. I didn’t have any money, but it was such a beautiful art form of telling stories.”
The 19 pieces in the gallery are a mixture of both contemporary and traditional art. They tell a range of stories such as a little fish at his birthday party, to a more somber tone of the trouble in the Middle East. Even the artists themselves vary, ranging in age from over 50 to one artist who is 11 years old. The variety allows students and faculty to see the broad range of art that India has to offer.

David Knight, the director of exhibition and collection at NKU, is assisting Chandrashekaran with the execution of the exhibit. Students do not have to pay for admission to the galleries he explains. They are open Monday through Friday from 9 a.m. to 9 p.m. so students are free to admire the work at their leisure, as well as complete an assignment for one of their classes.

“The English department and University 101 classes use our galleries a lot for writing experience,” Knight said. “It broadens our aspect on campus and even regionally.”

Although the exhibit has already been open for a couple weeks, a reception is planned on Sept. 6 from 5-7 p.m. After that, the gallery will remain in place until Sept. 21.

Knight is already planning the next exhibit though — an international photo gallery is scheduled to open sometime in October that will feature 144 photographs.
“Basically,” Knight said, “every place that typically exhibits artwork in the Cincinnati/Northern Kentucky regional area will have a photo-based exhibit in the month of October. Our exhibit will be a big deal. Most of the photographers, as well as their work, are well known.”