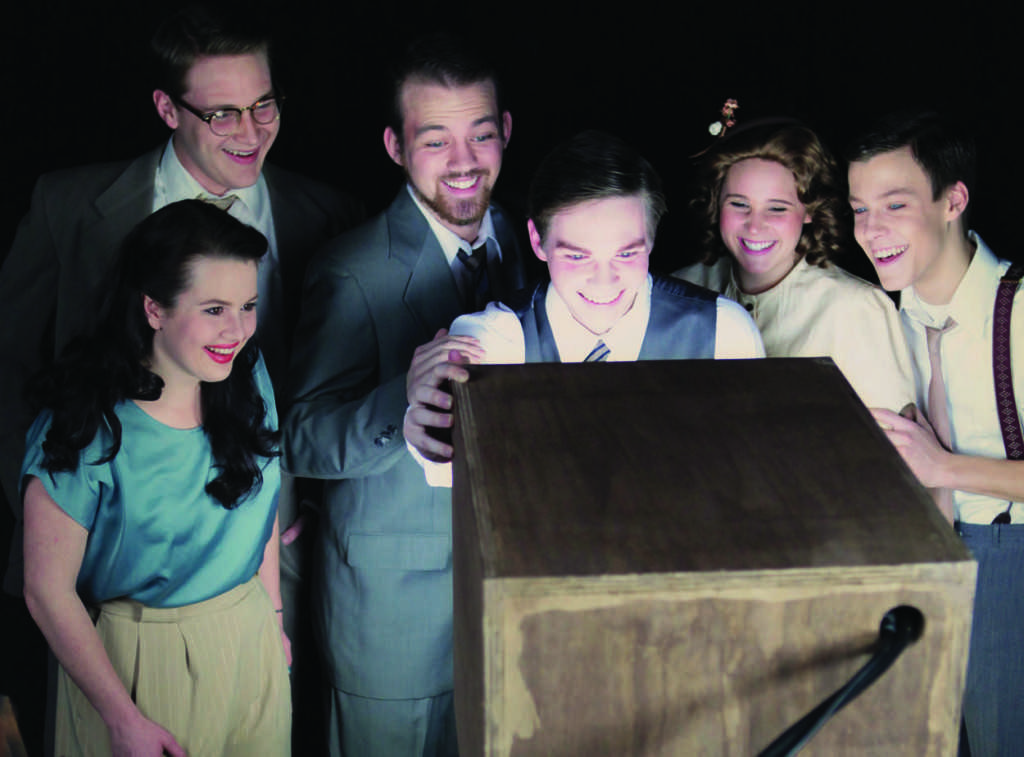 Reality check: Spring theater opens with dramatic (semi-)truth, ends with realistic comedy.
February is ushering in a vast array of creative and performing arts events at Northern Kentucky University. One such event is the start of NKU’s spring theater season, kicking things off with “The Farnsworth Invention.”
“The Farnsworth Invention,” which opens Feb. 16, is a drama-filled story in the vein of “The Social Network”—and fittingly so, as the play was written by Aaron Sorkin, who also wrote “The Social Network.”
The play, which director Michael Hatton described as a “traditional David versus Goliath” story, follows Philo Farnsworth, who invented television as a young man, as he becomes embroiled in a legal battle with RCA president David Sarnoff.
According to Hatton, Sorkin took artistic license in his telling of the true events that form the basis of “The Farnsworth Invention.”
“It plays with the idea of ‘What is truth versus fiction?’ and ‘What is memory?’” Hatton said.
“The Farnsworth Invention” will be showing in Corbett Theatre through Feb. 26.
“Our Country’s Good,” another drama, will follow “The Farnsworth Invention.” It opens March 22 in Robert and Rosemary Stauss Theatre and runs through April 1.
Written in 1988 by Timberlake Wertenbaker, this play, like “The Farnsworth Invention” is based on true events, this time hearkening back to the 1780s.
“Our Country’s Good” tells the story of the first fleet of settlers in Australia, who also happened to be British convicts. In the play one of the Royal Marines sent to Australia decides to direct the convicts in the production “The Recruiting Officer.”
“At its core, it’s about the transformative quality of theatre,” said theatre professor Daryl Harris.
According to Harris, the production makes surprising use of theatrical elements, which include sound, lighting and arena-style seating. Another unique element of the play is the number of roles Wertenbaker wrote into the play, in comparison with the number of actors the play was written for.
Harris said that the original play was written for 21 characters and 10 actors. The NKU production of “Our Country’s Good” will feature 14 actors portraying 25 characters total. Because some of the actors portray actors in the production, “The Recruiting Officer,” within the play, some of the actors in “Our Country’s Good,” are essentially playing up to three characters in one play.
“It’s a play within a play,” said senior integrated studies major Yunina Barbour-Payne.
In “Our Country’s Good,” Barbour-Payne plays convict Mary Brenham, who is one of the few convicts who can read and write. According to Barbour-Payne, Brenham “really believes in the play’s message” and uses her reading and writing skills to help the others understand the play.
The final show of the year, “My Favorite Year,” will open April 12 in Corbett Theatre, lifting the serious tone set by “The Farnsworth Invention” and “Our Country’s Good.”
“My Favorite Year,” which is set in the 1950s, is a comedic musical which was adapted from the 1982 film of the same name. The musical, described by director Ken Jones as a “swashbuckler,” takes place on the set of the King Kaiser Comedy Hour. “My Favorite Year” follows sketch writer Benjy Stone, who is charged with the task of keeping washed-up actor Alan Swann out of trouble.
According to senior musical theatre major Suzanne Blunk, who plays a part of the writing staff, the musical is “fresh and charming” and offers a realistic look at show business.
“It’s a really behind-the-scenes kind of show,” Blunk said.
The musical is the equivalent for NKU to a “big, Broadway-blowout musical,” featuring 32 actors and 15o costumes, according to Jones. Musical director Jamey Strawn said the musical will also feature a TV studio orchestra.
“The way Ahrens and Flaherty write, a lot of the comedy is in the timing,” Strawn said. “Sometimes the orchestration, or the music, is the punctuation for the joke.”
The play will conclude the theatre season with its final showing April 22. For box office and pricing information, visit http://www.nku.edu/~theatre/boxoffice/index.php.