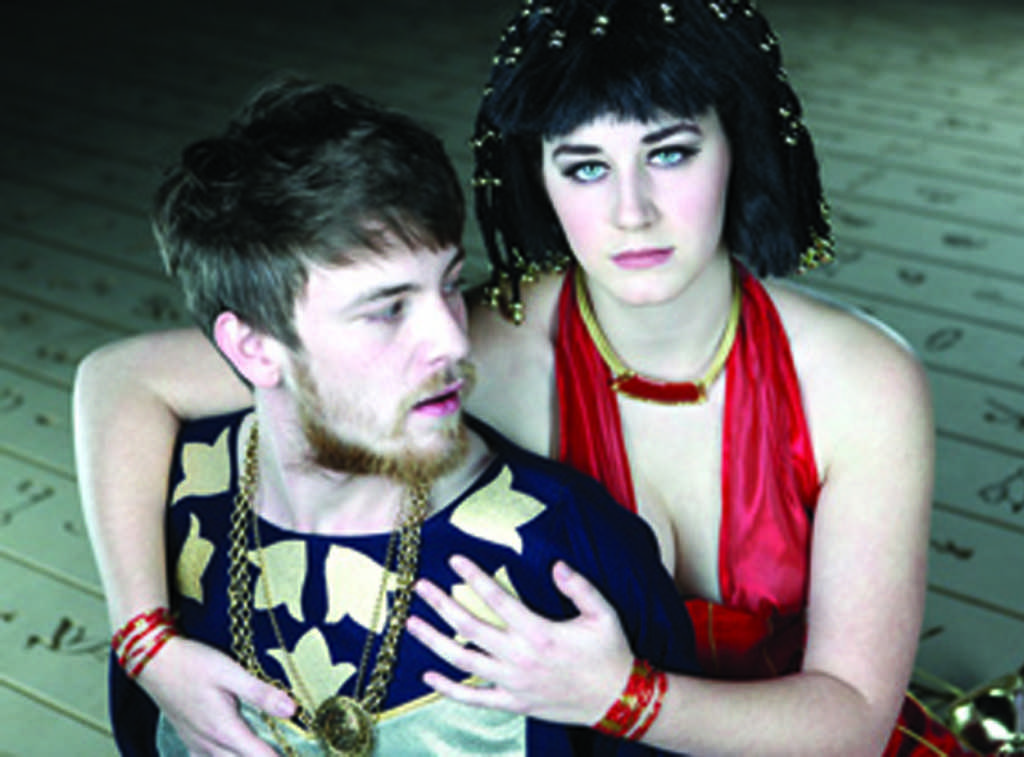 Set in Rome and Egypt around 30 B.C., Cleopatra, played by Robyn Novak, is a powerful Egyptian queen who falls in love with Antony, a married Roman general, played by Simon Powell. When Antony receives word that his wife has died and his empire has been threatened, he leaves Egypt and returns to Rome to fulfill his duties as a leader.

Upon his return, Antony quarrels with Caesar about his actions in Egypt; and to solidify his loyalty to Caesar, Antony marries Caesar’s sister, Octavia. When Cleopatra hears of Antony’s betrayal, she throws herself into a fit of jealous rage and vows to win the general back.

Antony soon returns to Egypt and Cleopatra. Antony, who is torn between his duties as a Roman ruler and his lover Cleopatra, is soon entangled in a war with Caesar.

In the play, Cleopatra and Antony are surrounded by war and betrayal. The couple struggles with their emotional desires and reason while trying to fight off the powerful Roman forces, ultimately putting their lives on the line for a love they swear they will die for.

Director of the NKU production Mike King has directed many other NKU theater productions, including “Dracula the Untold Story” and “The Cherry Orchard.” This winter’s play is considered to be one of the greatest love stories of all time, according to King.

With 29 students performing in the show, King said he has enjoyed working on “Antony and Cleopatra.”

“I have loved the script since the first time I read it back in college. It’s a play that fits so much life and history on stage. It’s kind of amazing. I always enjoy directing Shakespeare because it’s such a challenge,” King said.

Novak and Powell are seasoned actors who have performed in many other NKU theater productions. Powell, who won an Acclaim Award for his performance in NKU’s “Breaking the Code,” is a perfect fit for Antony, according to King.

“[Powell is] an actor with a lot of intelligence. He can read a difficult script and get the meaning out of it. He has a great passion, intensity and focus that makes a great fit for Antony,” King said.

Novak is familiar with Shakespearean theater, as she played Beatrice in NKU’s production of “Much Ado About Nothing.” Novak says she finds playing Cleopatra both rewarding and challenging.

“My favorite part about playing her is actually the biggest challenge I face. Everybody has an idea of who she is, and I get to deliver my interpretation,” Novak said. “I’ve been doing a lot of research on Cleopatra in order to give an accurate portrayal — but I also have to stay true to the script, which is Shakespeare’s vision of her. And being a queen isn’t so bad, either.”

The play is poetic and written in a suspenseful tone. With betrayal, love and power serving as recurring themes, “Antony and Cleopatra” has all of the elements to entertain both Shakespeare fans and hopeless romantics.

“Watching a Shakespearean show is much different than reading one, and this is definitely one you don’t want to miss. It has everything — sex, violence, politics — it’s a love story that rivals Romeo and Juliet,” Novak said.
King has high hopes for the performance.

“There’s everything you can want in a play. There’s comedy, tragedy, romance, a beautiful set, beautiful costumes. I just think its going to be a gorgeous play to watch,” King said.

“Antony and Cleopatra” premieres Dec. 1 and will continue until Dec. 11. The play will be shown at NKU’s Stauss Theatre in the Fine Arts Center, Monday through Saturday at 8 p.m. and Sunday at 3 p.m. Ticket prices are $14 for adults, $11 for seniors and $8 for students and can be purchased at the NKU box office.