Being a woman means something different to each woman. Julie Mader-Meersman, an associate professor of graphic design at Northern Kentucky University, explores that concept and many others in her show entitled “Personal Effects: Reflections on Domestic American Life”. Through the use of artists’ books, collage, poetry and hand-molded objects, Mader-Meersman explores themes such as domesticity, feminine identity, motherhood and consumerism.

During her sabbatical in the spring of 2010, Mader-Meersman worked on a keystone project that focused on her own experiences of coming of age as a woman. The project also focuses on 55 other women and their own stories of self-defining moments of womanhood. The work is displayed as an edition of three books designed as a collage or a quilt in paper format. Each book has the same content, but made with different materials. Mader-Meersman felt that this was an important project to undertake.

“When I discovered the point at which I became a woman, it was a little bit of an epiphany experience for me and I thought, gosh do other people have this,” Mader-Meersman said.
By asking questions and interviewing other women Mader-Meersman found out that each experience was different for each woman.

“And (then I was) starting to ask other people (and) I realized the diversity of those experiences; that some were extraordinarily profound and moving and some were extremely subtle and modest,” Mader-Meersman said.“ And for younger women who might not yet find themselves to feel like women, to see that landscape of experiences in a compiled area would be a rich experience to encounter.” 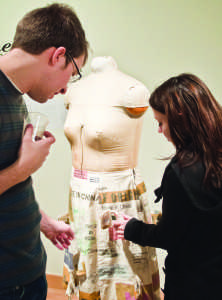 The moment when Mader-Meersman realized she was a woman was after a relationship ended and she discovered she was comfortable with her independence. The exhibit also explores themes dealing with Mader-Meersman’s personal experiences with womanhood, the concept of books as storytelling formats via traditional methods and nontraditional in the form of a skirt, and the concepts and use of design materials.

For Mader-Meersman creating art is an important part of being an art professor.

“Fundamentally when we’re teaching we’re spending our time teaching others how to do what we’re experts in. The longer you do that the further you get removed from the directness of that experience,” Mader-Meersman said. “ So a sabbatical affords opportunity to dig in deeply to the professional area in which you operate and connect with it in a way that enables stronger teaching, stronger ideas, and further growth because of the depth of the experience that’s possible by the time afforded by it.”

“Personal Effects: Reflections on Domestic American Life” runs from Jan. 13 through Feb. 4. The exhibit is located inside the Fine Arts building at NKU in the Third Floor Gallery.

Gallery hours are Monday through Friday 9 a.m. to 9 p.m.