Helping the world one charity at a time 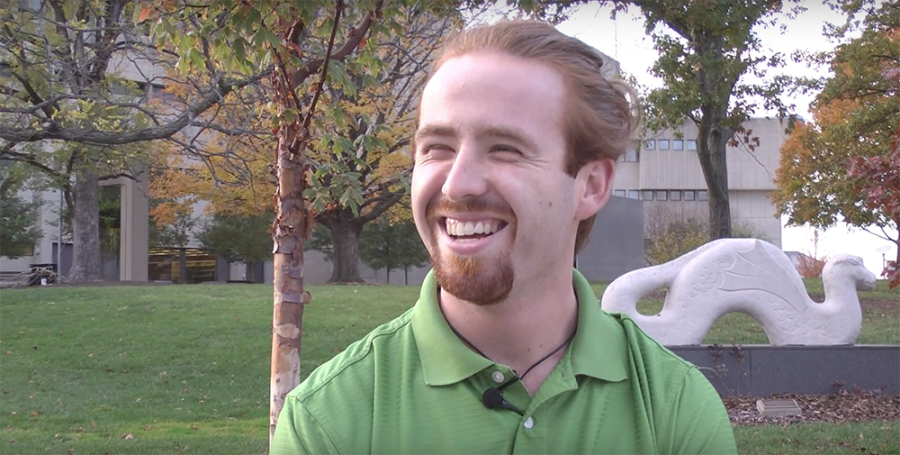 With the biggest smile and a boisterous laugh Drew Bamberger’s love of life is contagious to anyone who meets him.

Bamberger, a senior at NKU, is pursuing a degree in social work. He is involved in charities because he believes that will help to make the world a better place.

A terrible accident led Bamberger to where he is today.

“When I was seven, I was in a bike accident and suffered a traumatic brain injury,” Bamberger said. “My recovery over a three-month period, which I consider to be a miracle and God being involved in that process, it was my second chance. Cancer affects other people and someone might die today if there’s not a cure. That drives me to offer them the second chance that I got.”

Preston Suttmiller, vice president of Alpha Tau Omega (ATO), said that Bamberger is the most passionate person he has ever met.

“Whenever guys are lazy he gets them to rally behind a cause we’ve never done before,” Suttmiller said. “He’s the one people go to for any philanthropy event.”

This exceptional, fiery redhead is a stand out among NKU students as he yearns to help others out regardless if they are family or strangers.

“I’ve known Drew for four years,” Dempsey said. “When you meet him you want to hug him. He’s one of my best friends here. He’s one of the most compassionate people I know. He has a heart built for philanthropy and helping other people. He’s not satisfied until he reaches every goal he has set for himself. I can’t say enough good things about him.”

Bamberger has a way of touching everyone’s heart and is a trait favorable to many who know him.

“The fact Drew is always laughing and smiling, you can spot him across campus, and every time I see him he treats me like I’m his best friend in the whole world,” Suttmiller said. “He’ll give you this big hug. That’s my favorite thing about “Bambi” (Bamberger). Not one particular memory, but how he makes everyone feel special.”

As the Philanthropy Chair for ATO, Bamberger has been involved with many charity events at NKU, including Relay for Life and Mardis Taus along with other charities off campus.

“The first year we did Mardis Taus I was the Public Relations Chair, Bamberger said. “I looked at it from the perspective of we need to let people know about this event more than any other event on campus. I really turned it into a bigger deal than it was. I think seeing $15,000 coming out of that event was just an awesome experience.”

Dempsey commented how seeing Bamberger in his element and helping others out whether at Mardis Taus or Relay for Life is one of his favorite memories of Bamberger, “Seeing him happy and doing what he loves is definitely my favorite memory of him.”

Bamberger has raised $83,000 all together in his time at NKU and all of that money will go to charities such as American Cancer Society and St. Elizabeth Breast Center.