Tragedy, growth and healing: The Who set to return to Cincinnati 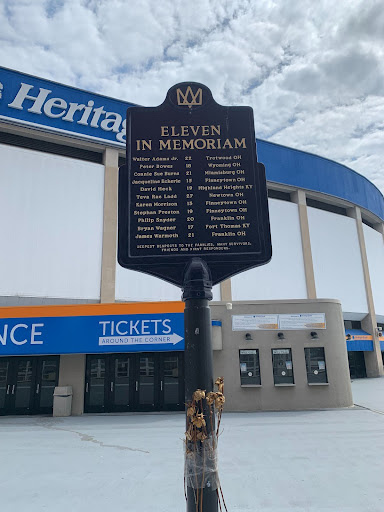 Gallery|3 Photos
Killian Baarlaer
Memorial in honor of the eleven people who lost their lives on December 3, 1979 at the Who concert in Cincinnati.

On December 3, 1979, an eager sellout crowd of 18,348 people gradually trickled into the walkways of Riverfront Coliseum, awaiting entry for a performance by rock band The Who. The show featured general admission festival seating; attendees could file into the stadium and establish their own vantage point, creating a sense of impulse to claim the best possible spot.

While awaiting festival seating entry on the west side of the arena, the crowd continued to expand and become boisterous. At one point, music was heard playing inside the venue, rousing collective uneasiness. The restless crowd began to collapse onto itself as people made strides to get to the doors. As the 8 p.m. show time drew closer, only two to four doors had been opened on the west side of the arena, according to the documentary “The Who: The Night That Changed Rock.”

“When the doors opened, I was behind the crowd and you could actually see the crowd compress by at least a third,” former Cincinnati Police Department Assistant Chief Dale Menkhaus said in the documentary.

The pandemonium was a lethal hazard for the people in the mass, forcing people to fight for air as the crowd converged and movement was constricted.

According to Menkhaus in “The Who: The Night That Changed Rock,” every rescue unit in the Cincinnati jurisdiction reported to the scene of the incident.

“I had seven code blues all at once, and I had to decide which patient to work on. And my only criteria was who was the warmest and the pinkest,” medic Guy Ninio said in the documentary.

Eleven people would die in the crowd from asphyxiation; many more were injured.

The Who went on to perform that night, unaware of what had transpired. The decision was made by the band’s manager, Bill Curbishley, who said he feared canceling the show would incite further chaos and prevent first-responders from mitigating the already turbulent situation.

For The Who, the event spurred a vortex of emotions, as they grappled with being the face of the tragedy while feeling helpless in preventing it.

The city of Cincinnati was devastated by the event, leaving a shared scar for the victims, their loved ones and the attendees who had a moment–anticipated to be lively and fun–spoiled by a maelstrom of unfortunate occurrences.

Current Director of Safety and Security at Heritage Bank Center Mike Bianchi–formerly known as Riverfront Coliseum and the site of the concert in 1979–referred to what transpired that night as “crowd craze.” Although he did not hold his current position at the time of the concert, his job involves ensuring a safe environment for events held today.

“The people outside had a stimulus. It was either real or perceived that they were missing something,”  Bianchi said. “It was like a call to action to move to a better place of value.”

The 1979 disaster concert exposed a glaring need for event security and planning policies to be reevaluated. A ban on festival seating in Cincinnati was enacted weeks after the event, an ordinance that would be repealed in 2004.

Over 42 years after this traumatic event, policies that aim for event safety remain highly relevant for event organizers. Cincinnati municipal law includes comprehensive event safety regulations, such as the mandated Public Assembly Permit, which states, “No person shall admit patrons to a facility for public assembly for an event without first obtaining a permit approved by the Cincinnati Fire Chief.”

According to Bianchi, Cincinnati municipal law also requires one door be opened for entry per 1,000 attendees of an event.

Bianchi said effective communication between the crowd and security is instrumental to ensuring safety at events, while premeditated collaboration between venue staff, first-responders and the entertainer’s camp serves as proactive measures to preclude any possible lapses.

After all these years of coping with this disheartening event, The Who is set to return to Cincinnati on May 15 at TQL Stadium, an event primed to be emotionally loaded for the city and band.

“We need to go back to Cincinnati,”  Pete Townshend said, a living member of The Who, in “The Who: The Night That Changed Rock.” “It would be such a joyous occasion for us and such a healing thing, I think.”

The Who will come face to face with the city that has experienced the reverberating effects of the tragedy. It will be a full-circle moment for the city and band–a chance to collectively recognize and mend the grief that has lingered all these years.

“They’ve said that this is the most important stop on their tour. Absolutely,” Tanya O’Rourke, co-executive producer and anchor of “The Who: The Night That Changed Rock” said. “I really hope by the end of that night, that there might be some tears shed but that everyone feels a little bit lighter.”

“Being recognized for my musicianship with the weight of the lives lost behind it is a heavy thing,” Smedley said. “It is definitely a good motivator to keep improving as a musician knowing that I have to represent those who have passed.”