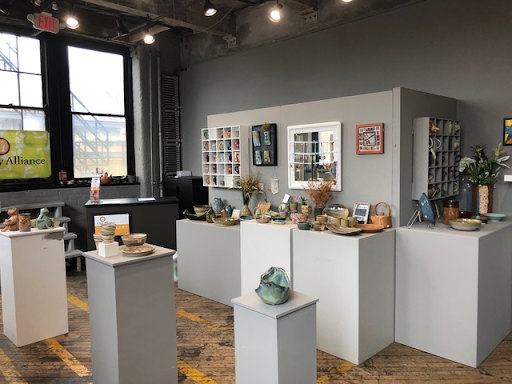 The Clay Alliance space at the Pendleton Art Center.

Alongside the Clay Alliance, senior foundations lecturer Nicholas Bonner has taken over the position of director of galleries at the Pendleton Art Center. Simultaneously, Bonner has assumed the director position while still remaining a lecturer at Northern Kentucky University, as he has for nearly 23 years.

During Final Friday, artists in the Pendleton Art Center open their studios to the public and allow people to purchase their work. This event happens on the final friday of every month and the Clay Alliance is located on the fourth floor.

Bonner was a part of the Clay Alliance, a non-profit organization in the greater Cincinnati area that aims to educate and raise awareness about clay makers and their work. Before his position at the Pendleton, he joined the board of directors in the Clay Alliance.

After applying for a space, the Clay Alliance moved from the Essex building to the Pendleton Art Center. The Pendleton houses hundreds of artists that are able to showcase and sell their work independently or during Final Friday at the end of every month.

Bonner had a vision for the space even before becoming the director, but no one quite understood how it would change the outcome of the experience for the public and for the potters.

“My personal feelings is if the space looks like a gallery, it will attract more people, increase sales, and everybody involved will up the ante in terms of the quality of work they put in the gallery,” Bonner said.

With about 150 potters involved in the Clay Alliance, 22 of them sell pottery within the gallery space. Bonner hopes to change the public’s experience as they walk through, and intends to make multiple changes over time in what he calls “phases.” Changing the look of the gallery was part of phase one.

“As we know, if you want quality, you either have to do it yourself or pay somebody to do it. I just wanted to really elevate the look and feel of that space,” Bonner said.

When the old director was in position, Bonner would take part in Final Fridays and became a staple in the space.

“I had been to practically every single Final Friday and was helping John. He ran the show and sold the stuff and I was the schmoozer. It was really easy for me to pop down every Final Friday and hang out and tell people about ceramics and explain the chemistry,” Bonner said.

Because Bonner was well known in the space, he was asked to become the new director. The change in position came after the sudden passing of the last Pendleton Art Center director and as Bonner’s board term with the Clay Alliance had completed.

To make this transition to director easier, Bonner hired an assistant, Drake Ash, to carry out logistical practices for the space.

Being a potter herself, Ash explained how she feels that she is learning more from Bonner about the craft itself and the gallery.

“I would say that he is probably helping me more [than I am helping him]. Because he is a professor of ceramics and he has that professional experience, I have tried to get as much information out of him as possible while we work,” Ash said. “If I’ve got questions about glaze or how [pots] were made, he can weigh in on that. In terms of renovating the gallery, he has put forth a lot of ideas and has explained his thought process which has been a really interesting learning experience.”

Much like Ash, fellow potter and member of the Clay Alliance Marcia Cochran expresses multiple positive changes in the space because of Bonner’s expertise.

“He immediately changed the look of the gallery. He has brought a brighter and fresher look to the space and it looks more organized,” Cochran said.

Bonner explained that his educational degree in ceramics allows for an elevated perspective to the space in terms of his overall experience in ceramics and in teaching.

Ash shared that Bonner also hopes to get a biography of every artist in the space as a new initiative to share more of the personal side to artists and the pieces they share to the public, and she intends to help him in this process.

“I want to have small bios of everybody that is in the gallery and a picture of them so that people can see who they are and relate to them. That way you can have a personal connection with the artist,” Bonner said.

Bonner hopes that the Pendleton Art Center, including the Clay Alliance’s space within, will be a place for artists and people of the community to build a better connection.

“It’s for those kinds of people who want to support the arts and individual artists and don’t have the ability or interest in making, but they love appreciating and having,” Bonner said.

Bonner has tried to emphasize the importance of community at the Pendleton just as NKU has intended to do since its foundation.

To learn more about the Pendleton Art Center and Final Friday, go to https://pendletonartcenter.com/. For individualized questions regarding work sold in the Clay Alliance space, go to http://clayalliance.org/ or contact Nicholas Bonner at bonnern@nku.edu.