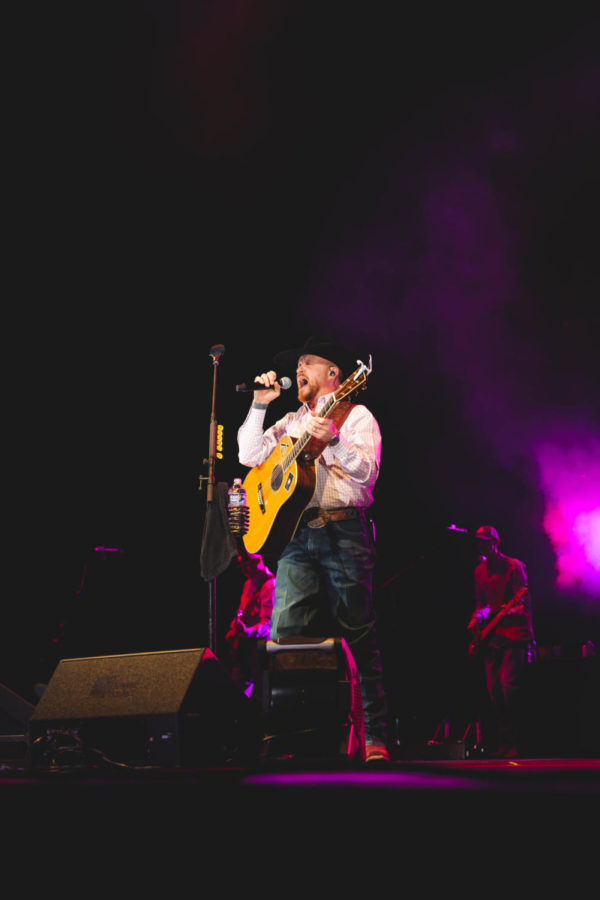 Cody Johnson performed at BB&T Arena on Friday night in front of a packed house.

Cody Johnson kicked off this year’s round of concerts at BB&T Arena with Easton Corbin, and they did not disappoint. On Friday night, both country artists made their way to the arena for a show that the many country fans of Northern Kentucky will not forget.

Both artists have gained popularity in the country music industry, and NKU students and surrounding country fans were so excited to have the country star at the arena. Many showed their enthusiasm by wearing cowboy hats, bell bottoms, and flannels.

With the radio station B-105.1 Cincinnati’s New Country hosting, the show kicked off with an enormous round of applause and many glasses were raised as Corbin came out. Corbin’s charisma towards the audience mixed with some of his most popular songs, including, “A Little More Country Than That” and “Yup” was enough to stir the crowd up for the main performer.

Toward the end of his performance, Corbin was jumping into the crowd to spend time with some fans he was previously high-fiving on stage. After many short covers of other popular country songs written by his idols, Corbin wrapped his set up with what is arguably his most popular song, “All Over the Road”.

B-105.1 was back on stage after a brief intermission to introduce Johnson with many jokes, and the fans’ reactions were priceless. What went from a tame concert turned into an uproar of excitement throughout the arena.

Johnson certainly got his fans’ attention by opening with “Honky Tonk Hardwood Floors”. With the lights stretching up to the top seats of the BB&T Arena, it was clear to the audience that everyone was on their feet swaying or outright dancing. Johnson stated that he just wanted his fans to have a good time and “unite together over country music.” This was the best way to describe what happened at the show.

Overall, Johnson and Corbin put on an amazing show that any country fan would enjoy. Along with their bands, which included a violinist, these country stars were sure to leave an impression on those who witnessed the concert.