‘The Mystery of Edwin Drood’ opens in the Corbett Theatre 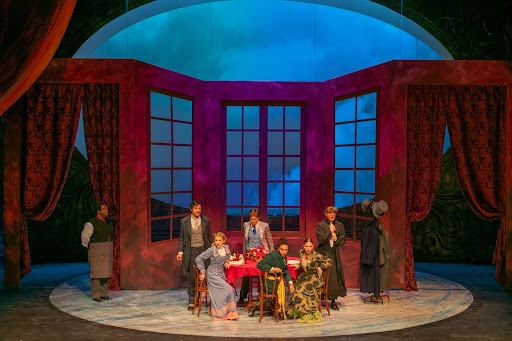 Company in “No Good Can Come From Bad.”

Figure out “whodunit” in “The Mystery of Edwin Drood,” a Tony Award-winning best musical, that is set to entertain and interact with audience members this weekend and next weekend in the Corbett Theatre located in the SOTA building.

“The Mystery of Edwin Drood,” written by Rupert Holmes based on an unfinished novel by Charles Dickens, is a murder mystery show that is a play within a play that tells the story of young Edwin Drood, who ends up disappearing during the show.

Cast members of “The Mystery of Edwin Drood” filled the house of the Corbett Theatre to tally up these votes, as well as used other methods like clapping to see what the audience thought was best.

Jason Danieley, former broadway performer and director of “The Mystery of Edwin Drood,” is excited to be directing at the collegiate level for the first time and having a more interactive show after many productions had to move to an online format or be canceled back in 2020 due to the COVID-19 pandemic.

“Let’s make it front and center and completely opposite of what we’ve been doing for the last year and a half, two years where we’re just zooming or streaming. So that whole combination is something that’s fun, interactive and also hopefully somewhat educational for the students to work with a professional actor,” Danieley said.

Danieley also described what the process has been like directing at the college level versus at a professional level, adding how his sister Corrie Danieley, associate professor in acting and performance, has been a really good mentor for him throughout the process of directing “The Mystery of Edwin Drood.”

“It has been really fun for me and educational for me to work with Cory because she’s been directing on the university level for a long time. So, she’s my assistant, but she’s also my mentor, which is great because she’s five years younger than me,” Danieley said.

Je’Shaun Jackson, senior musical theatre major and chairman/Mayor Thomas Sapsea, is excited to be back on stage again with this show and to be more connected with castmates, which has been a challenge throughout the COVID-19 pandemic.

“We preach ensemble here, and this show feels like an ensemble. We are all coming in to protect each other and be there for each other in this show,” Jackson said.

Jackson also mentioned that he hopes audience members are also excited to be back in the theatre.

“Theatre is back. I hope audience members are excited because there is such an audience participation aspect for this show, so I hope they get their joy and fulfillment from seeing this show,” Jackson added.

Other students cast in the production, like senior musical theatre major Arianna Catalano who plays Helena Landless/Janet Conover, described what it is like getting to do a show with as much audience participation as there is in the show.

“This show has so much audience participation that it is almost impossible to think about anything else going on in your life other than this show,” Catalano said.

Throughout the rehearsal process of “The Mystery of Edwin Drood,” Catalano mentioned important things she learned, such as letting things go that she couldn’t control.

“The Mystery of Edwin Drood” runs for two weekends in the Corbett Theatre from Nov. 12-14 to Nov. 17-21. Tickets are $10 for students, $14 for staff and alumni and $18 for adults. For more information or to buy tickets visit https://www.nku.edu/academics/sota/events/tickets.html.