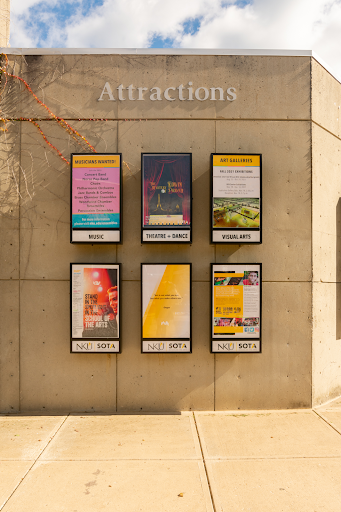 The exterior of the School of the Arts building on the campus of NKU.

Since the start of the fall semester, NKU’s theatre and dance department has had to make some adjustments in order to put on live performances again safely. For many students studying theatre, this has made it hard to participate in shows and other live theatre events on campus.

Center Stage Players, an organization housed in SOTA theatre and dance Department, is ready to help performers adjust to this pandemic while also still giving an opportunity for students to be able to do their art.

Any student that is a major or minor in the SOTA theatre and dance department are automatically in Center Stage Players. Students can get involved as much or as little as they would like to.

Students in the theatre and dance department have opportunities to network, perform and learn more about their art in Center Stage Players.

“When I auditioned for my first show I was not a major at all and very much wanted to do Anthropology work, but I had a great time and that was my move into doing theatre professionally,” Archer said.

Now, Archer is interested in doing more of the operational and technical side of Center Stage Players.

“The kind of work I do now is filling out paperwork, filling out things online and helping make cool things happen which is honestly a great experience,” Archer said.

Archer mentioned the importance of being able to make sure things run smoothly as the president of Center Stage Players.

“I am super passionate about making sure things go well. That is my whole deal and my whole career is making sure (things) go well and run smoothly,” Archer said.

“When I was a freshman I was really new and I didn’t really know anyone coming in, so I started getting involved in some of the smaller programs we do, like some of the smaller fundraisers for our mainstage shows, and that led to this whole community of artists,” Angel said. “It led me to all kinds of new friendships and once you start getting involved you start teaching new people and you become a leader. One thing led to another and now I am making decisions.”

Angel mentioned what Center Stage Players has done for her with her time at NKU.

“It has given me as an individual a voice in the theatre program. It is really hard going to a new place as a freshman so it has provided a sense of family and fun throughout this very unique college experience I have had,” Angel said.

Other students like Je’Shaun Jackson, senior musical theatre major, explained how Center Stage Players was the first thing he got involved with at NKU too.

“It was like that first safety net and that first pathway into the NKU theatre and dance family, which was amazing,” Jackson said.

Some of Jackson’s favorite events he has participated in while being involved at Center Stage Players include the cabarets that are hosted.

“My favorite event with Center Stage Players has to be cabarets. They are these fun things we do once a month and everyone in the program comes together and we just enjoy each other’s company. We perform, we do other types of things like skits and poems. You do whatever your heart desires,” Jackson said.

Jackson also mentioned things he hopes other students get out of Center Stage Players.