How SOTA decides the mainstage season 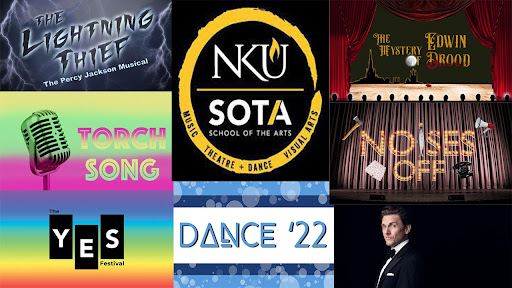 A graphic of upcoming shows and musicals for SOTA.

Every year the School of the Arts (SOTA) announces its theater line-up. This year, the first show in the season was “Torch Song,” which ran from Sept. 29-Oct. 9 and was directed by Michael Hatton. Hatton, theatre and dance program head and director of “Torch Song,” works with the other department heads in SOTA, as well as prospective directors to choose the shows that will feature in the line-up.

The season’s schedule is typically chosen a year or more in advance.

“As a producing artistic director I need to make sure that I am working within a far enough in advance timeline. So for example, we are in the process right now of selecting the season for next year.,” Hatton said.

Selecting the shows so far in advance allows the producers and program heads to give the artists enough time to prepare. They do this by researching and deciding on what designs are appropriate for the setting and time period of the show.

The time that they have also allows for the conversations to start.  Hatton sits down with the heads of the scenic, costuming lighting departments, works out the preliminary budget and plans as to how they will pull off each show in the season.

The next meeting is for the artists and designers to present their research and projected budgets. The program tries to reuse and find as many locally sourced pieces that they can rather than build the new pieces or buy them because it is more eco-friendly and more financially efficient. The year’s budget is split among the shows and some require more money than others, so a big part of the conversation is where the departments can tighten their belts to leave more money for the other shows.

Hatton stated that each year the budget differs as to how much each show will cost, depending on what demands the script has for the designers to fulfill and how much the rights to each show will cost. It also factors which theater the production will take place in.

Each season, SOTA typically puts on three plays and three musicals. This aids the program in giving it’s students an education that will prepare them for their careers in the industry.

Hatton said that his number one priority other than the stories themselves is that his students are getting a well-rounded education while they are in the SOTA program.

Hatton said that the program offers a four year cycle through different genres in order to offer the students the chance to be experienced in as many genres as they can be for when they go into their chosen field. Each student in the Bachelor of Fine Arts and musical theater major has to audition for every production and many find that they have common ground with shows that they typically would not go out for.

Hatton said he wants the students to see themselves in their theater and prides himself in making sure to include shows like “Torch Song ,” a show based on a Jewish drag queen in the early 1980s. This role is typically played by a white actor, but a black actor was cast for not only the lead but the love interest of the lead, Alan.

This also happens to be Hatton’s favorite show of the season.

“I’m exceptionally proud of our students; it’s a very challenging play and it’s not meant to be performed by 18 to 20 year olds and I felt that they have really tackled the content very very well and have done both the playwright and our whole program very proud,” Hatton said.

The diverse casting also reaches to “The Mystery of Edwin Drood,” where a character that is traditionally played by a white actor is played by JeShaun Jackson, an actor that is a person of color.

Jackson, a senior, has been with the program throughout his entire college experience. He says that he finds a community in the theater department.

He also was in “The African Company Presents Richard III,” directed by Professor Daryl Harris. Jackson says he loves working with Professor Harris because he knows that he will have the space to grow as an individual and as an actor.

Hatton believes that a good part of getting these students the education they deserve is to cast while being color conscious and story conscious. This means that the casting decisions are made based on who will do justice to the role, while also being respectful to the story being told.

Last year all productions were filmed, which made ticket sales go down. This year however, the productions will take place in front of a live audience while everyone is masked and most cast and crew are vaccinated.

Hatton must take revenue into account as well when approving the season’s line-up. Hatton also has to think about what the audience is interested in.

He looks at trends that other educational institutions are following and also looks at what material is available. He takes the budget into account as to what shows can be done in the space he has and what shows that have stories that will hold up when built within the budget of a university program.

Hatton stated that a show that is being considered must meet the requirement that the story is good and can keep the audience’s attention. He doesn’t want to set the students up for failure, so they also look at what students they do have available for casting. All of these things play a huge role in what shows get chosen for the line-up and the decision is made as a group effort by every single department.