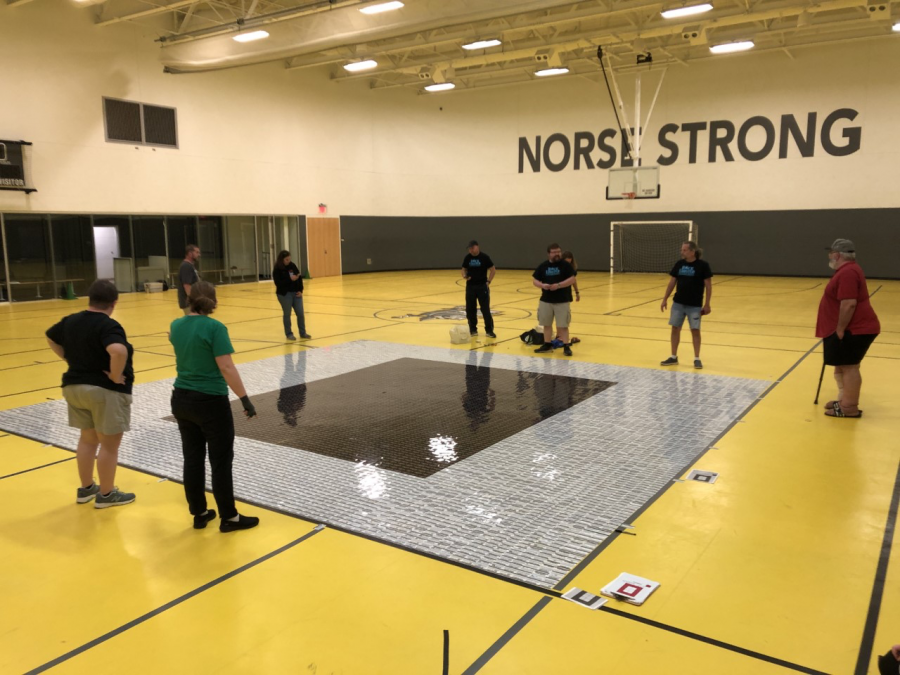 Several NKU alumni members, including Sean Gardner, make a “0” out of plastic gift cards at the NKU Campus Rec Center, representing the idea of zero waste and new ideas.

Sean Gardner, a 2019 NKU graduate, is set to break the world record for the largest number made of plastic cards.

It all started back in Gardner’s high school guitar class, when many students would often lose their guitar picks. As a more cost-effective option, Gardner’s guitar class teacher purchased a guitar pick punch and had students bring in used gift cards to punch out into guitar picks.

Later on, when Gardner was working at Red Lobster, he noticed lots of gift cards getting thrown in the trash. This inspired Gardner to take action by helping reduce waste.

“I realized there were a lot of gift cards that were getting thrown into the trash and thought about if I could do something, at a bigger scale,” Gardner said.

At first, Gardner started out small by just receiving leftover gift cards from his coworkers.

“I had a handful of servers bring me gift cards from their tables every so often,” Gardner said.

“Initially, it was pretty easy — I just got a handful of gift cards every night and would punch them out before bed. But then they started to bring me enough that supply overran the demand completely, and I wound up with 10,000 gift cards,” Gardner said.

Gardner also used these guitar picks to donate to music programs, being that many were underfunded especially during the pandemic.

“I’m not asking for anything for my guitar picks. I am just sending them to help out underfunded music organizations,” Gardner said.

On Saturday, Gardner along with two other friends, Shawn Reed and Paul Phillipy, used these 10,000 gift cards to make a “0”, representing zero waste and encouraging upcycling. This event took place at the Campus Recreation Center on campus.

“We’re laying out gift cards to make a massive zero. This zero helps represent the idea of zero waste and trying to find new and interesting ideas to not only help cut down waste but also find ways to help the community,” Gardner said.

Gardner hopes this world record and event will help students look for new ideas, like the one he had that led to a world record.

“It’s one of those fun things that I hope makes students look for new ideas like the one I just stumbled upon and ran with,” Gardner said.

Gardner also hopes that this event will also show them that they too can break a world record, as well as get inspired to do something impactful.

“I hope this event inspires them, and I hope it shows students to see what they themselves can accomplish. It’s not every day you really hear about a world record taking place in your hometown,” Gardner said.