‘They see you as the blueprint’: student on being a teacher, mentor through cello lessons 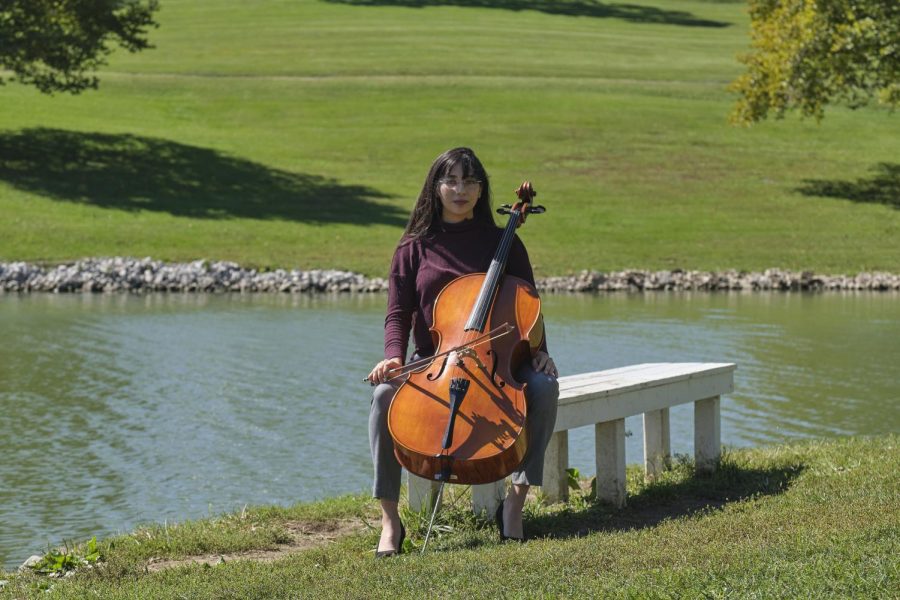 The best reward a musician can receive is the establishment of a lineage, according to Gita Srinivasan.

Not a lineage in the biological sense, of course. In classical music, lineages describe how a musician can influence later generations of performers either by composition choices, playing style or technical skills.

Some of these musicians—such as Pablo Casals, one of the most famous cello players in recorded history—have even taught masterclasses, which allows attendees to learn and eventually pass down those lessons to their own students.

“[Musicians] use genealogy because you are receiving a lot of the fundamental knowledge that’s been passed on over generations and sometimes even across the pond as well,” Srinivasan said.

This is one of several words with familial connotations in the music industry. Srinivasan joined “the string family” when she was 12 years old and has now played the cello for 11 years.

Srinivasan is a senior majoring in music performance. She’s on the instrumental track of cello, which she has played ever since she begged her violin teacher to let her try one afternoon during lessons.

But like many musicians, Srinivasan said her pathway to a career in classical music endured a few detours.

When applying for colleges as a teenager, she felt pressured to follow a more standard career path—one that her parents would support.

“I had ‘options’ but my options were to be a doctor or lawyer or engineer,” Srinivasan said.

While none of those careers really interested her, she decided to model herself after her older sister, who was pursuing an engineering degree at UC Berkeley.

Though Srinivasan was accepted into the engineering program and finished her freshman year at Berkeley, she said she was unhappy and soon withdrew to take a gap year.

In that year, she moved back home and began taking cello lessons again—this time, at NKU’s music department. When she formally enrolled in NKU in late 2017, her major was music performance.

Though Srinivasan thought her parents would be upset, she said they were very supportive of her decision.

After she had completed just one semester at NKU, Srinivasan was approached by one of her professors about mentoring a new student. The student played cello and there were no instructors on staff that could teach her.

Srinivasan was a performance major—not an education major—and she had never taught music lessons before this offer.

“I love teaching, but I was so intimidated by it not too long ago because I sincerely thought that I didn’t have enough experience to reliably teach someone,” Srinivasan said. “It turns out, I did.”

Srinivasan began administering private lessons in the fall of 2018. Since then, she has privately taught 10 students in her “studio,” which is not a physical room but a term to describe the relationship between an instructor and her privately-taught students.

According to Srinivasan, teaching someone to play an instrument is like sharing your thought process.

“You share techniques, tricks, ways to think about certain notes. You share the choreography of your left hand—how your fingers move. You share how you plan out how loud and soft you play,” Srinivasan said. “I think the hardest part about teaching is the holistic nature of it. You can’t teach any two students the exact same way.”

According to Srinivasan, that’s what makes teaching in a group setting challenging.

Srinivasan is also a junior instructor within NKU’s String Project, which is a program where faculty and undergraduate students teach participants unaffiliated with the university. Srinivasan teaches the prelude and intermezzo classes, which typically consist of children between the ages of 8 to 13.

Another professor recommended that she join the organization after witnessing Srinivasan’s work with children at a music-based summer camp. Four times a week, Srinivasan administers lessons over Zoom to a class of 10 to 25 students.

Srinivasan said teaching younger students requires more emotional fortitude and patience because they hold instructors in a much higher regard.

“It is such a gift and a privilege to be in a role model position for young people,” Srinivasan said. “I would say the influence does definitely extend beyond the cello.”

According to Srinivasan, she has noticed the younger students copying her speech patterns, mannerisms and posture. Since she is their instructor, Srinivasan has become to them what her own instructors have been for her—a mentor.

“These kids, they see you as the blueprint from which they’ll develop themselves,” Srinivasan said.

According to Srinivasan, even the older students—those in middle or high school—have come to her after a lesson for advice about schoolwork or peers.

“[Music] creates such a safe space for your student to really be heard and feel heard,” Srinivasan said.

After graduation, Srinivasan plans to apply to graduate school for music performance. Even though she still plans to pursue music in a stage setting, Srinivasan said she believes she will continue teaching cello for the foreseeable future.

“The truth is, you will be really hard-pressed to find professional musicians, especially in the classical field, who don’t teach,” Srinivasan said. “Teaching is a staple of the trade.”

Though playing the cello is her passion, Srinivasan said teaching the instrument to others is how she keeps that passion alive.