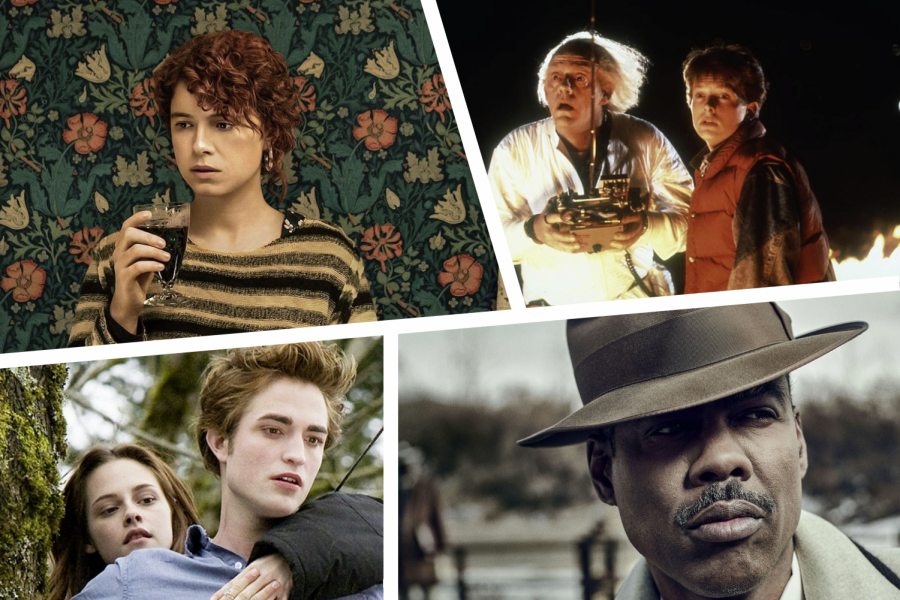 Say “I” if you’ve considered leaving Earth this year. This crew of astronaut’s treacherous three-year mission to Mars might have you reconsidering your trip on Elon Musk’s next rocket launch. Heart-breaking yet romantic, “Away” serves as a catalyst for that much-needed cry you’ve likely been putting off. Starring Hilary Swank and Josh Charles, this interstellar series will be difficult to stop once begun. Get ready to binge.

From writer and director Charlie Kaufman, this film is mind-boggling and downright weird. Cindy, played by Jessie Buckley, visits her new boyfriend’s family and her experience is that of a fever dream. She’s sure to join the club of quirky indie women, so get ready to hear the next generation of film majors raving about this being their favorite movie. “I’m Thinking of Ending Things” is like a disconcerting, hallucinogenic experience.

In a post-war backwards town where Southern Gothic meets horror, we find a slew of complicated and dark characters coming to grips with sinister forces. Starring Tom Holland, Robert Pattinson and other renowned actors, “The Devil All The Time” follows orphaned Arvin Russell as he fights the Devil himself. Hey, who hasn’t wanted to see Edward Cullen turned psychotic, spider-handling preacher?

Starring some of our favorite British actors and actresses—like Millie Bobby Brown, Helena Bonham Carter and Henry Cavill—this film promises witty and hilarious drama. For those with a guilty pleasure of period pieces, “Enola Holmes” is a spin on the traditional Sherlock Holmes story that follows his younger sister attempting to out-smart her brother and solve the mystery of her missing mother. We’re all in need of a light-hearted mystery, and this movie provides a sweet escape from the ever-growing anxieties 2020 has created.

For those in need of a comfort classic, Netflix has your back. All three “Back to the Future” films are finally available, and we couldn’t be more excited. California teen Marty McFly is sent to the ‘50s in a tricked-out DeLorean turned time machine by a stereotypical eccentric scientist, Doc Brown. From ensuring his parents fall in love, a sequel in which McFly must stop a hell-scape of a future from occurring and finally a visit to the Wild West, the “Back to the Future” films cover a multitude of scenarios only time travel can create.

Have you ever wished you could forget your first date? Or maybe yours was so good, you want to replay it over and over. In “50 First Dates,” you can experience both with Drew Barrymore’s Lucy Whitmore, who has short-term memory loss and can’t remember anything from the day before. Henry Roth, played by Adam Sandler, is set on being with Whitmore, but must work around her short-term memory by creating a new first date with her multiple times over. This 2004 film has all the ingredients for a great rom-com.f you’ve never seen it, we suggest curling up with that weighted blanket and pumpkin spice for a night in.

“Twilight” may have been removed on Amazon Prime, but Hulu has saved Twihards everywhere. Forks, Washington has never looked so appealing after the year we’ve had. If you’d rather fight vampires, werewolves and the complexities of being not-like-other-girls, then it’s time to revisit this classic young adult series. Dust off your Edward Cullen cardboard cut-out and prepare for the rise of Team Edward vs. Team Jacob discourse all over again. 2008, you were a simpler time.

It’s unlikely any of us would willingly redo middle school, but comics Maya Erskine and Anna Konkle travel back to the seventh grade to experience the embarrassment and awkwardness of being a teenager all over again. “Pen15” is where “Ned’s Declassified” and “Scott Pilgrim” meet. If you’ve not already binged season one, you have another week to prepare for Erskine and Konkle’s return.

When a dysfunctional family experiences the pressure of owning a mediocre burger joint on the beach, chaos arrives. From a borderline sociopathic fourth-grader, a self-proclaimed musical genius 11-year-old and a boy-obsessed middle school girl, this show is bound to serve up hilarity, as it has been for the past nine years. It’s amazing the show has aired this long, but none of us are complaining.

If you’re looking for a show filled with drama, theft, murder, the mafia—you name it—“Fargo” has it. After season four’s initial release was put on hold due to COVID-19, “Fargo” is finally returning this month. Season four follows Chris Rock’s Loy Cannon in 1950s Kansas City who is the leader of a crime syndicate composed of Black migrants fleeing the Jim Crow South. Their tumultuous relationship with the Kansas City mafia makes for a tense and binge-worthy season.