Get in the spirit of the season with these eight classics 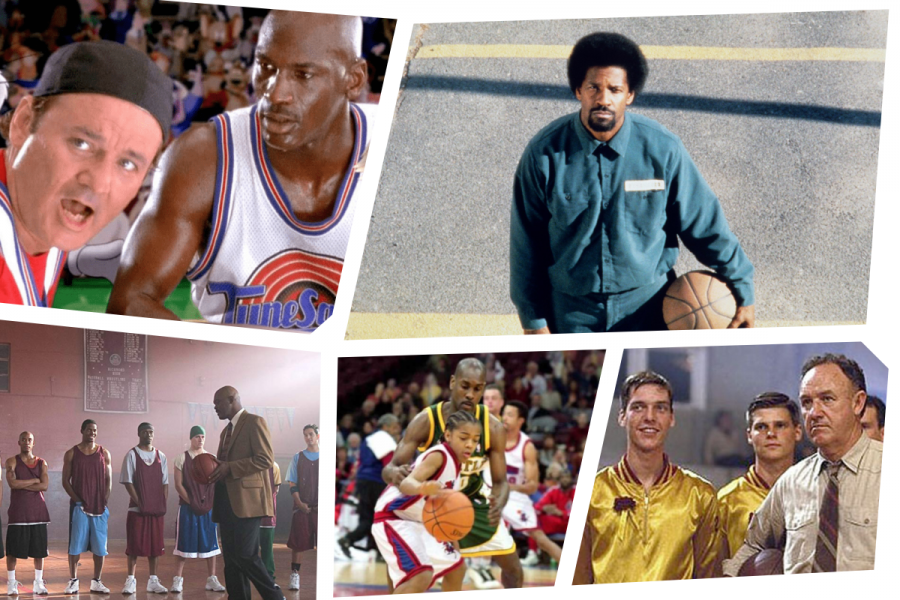 He Got Game (1998) by Spike Lee
What’s a list of basketball movies without “He Got Game?” The number of college guys who own Jesus Shuttlesworth jerseys alone guarantees it a spot on this list. Denzel Washington plays Jake Shuttlesworth, who is in prison for accidentally killing his wife. The governor of the city, an alum of fictional college Big State, lets him out on parole for a week and promises to reduce Jake’s sentence if he can convince his son Jesus, the top high school basketball player in the country (played by NBA superstar Ray Allen. You know, “Ray Allen for a 3, BANG!”? That Ray Allen?) to play for Big State. “He Got Game” is one of Spike Lee’s best films, and arguably the best basketball movie ever—if you’re going to watch one thing off this list, make it this one.
Space Jam (1996) by Joe Pytka
Speaking of college guys who own basketball jerseys based on a movie that stars an NBA legend, “Space Jam” is the most well-known sports movie in history. This live-action/animated comedy, in a premise that still makes absolutely no sense over 20 years later, stars Michael Jordan and the Looney Tunes facing off against the villainous Monstars, who have stolen the talents of then-NBA players like Charles Barkley and Patrick Ewing. Bill Murray shows up to play the role of … himself, and Danny DeVito is also here for some reason. It also has one of the most iconic theme songs for any movie, ever. You’ve probably already seen this movie like eight times, so does it really need explaining?
Hoop Dreams (1994) by Steve James
This groundbreaking documentary followed the lives of two African American high school students, William Gates and Arthur Agee, for five years as they try to achieve their goal of reaching the NBA. “Hoop Dreams” uses sports to talk about important social issues, like the racial, educational and economic divides of modern cities, and illustrates why telling athletes to ‘stick to sports’ is foolish. This isn’t just a good basketball movie—it’s a good movie, period. (The 2007 sequel, while not nearly as powerful, stars current NBA player Patrick Beverley.)
Hoosiers (1986) by David Anspaugh
“Hoosiers” is one of the only sports-related films to ever be selected by the Library of Congress for preservation on the grounds of being “culturally, historically or aesthetically significant.” This 1986 basketball flick about small-town Indiana basketball is loosely based on a true story and stars Gene Hackman as the head coach of the Huskers, a high school basketball team. “Hoosiers” is the most influential film on the list, as it paved the way for a lot of cliches featured in many sports movies.
Blue Chips (1994) by William Friedkin
This film, which was hated by critics on release but is now well loved by sports fans everywhere, is the reason Shaquille O’Neal asked the Orlando Magic to draft Penny Hardaway. The film stars Nick Nolte as college basketball coach Pete Bell, who turns to illegally paying college athletes to save the school’s struggling basketball program. The two players star as ‘blue chip’ basketball prospects, and the two became such good friends during filming that Shaq went to Orlando’s front office to specifically request he join the team. It also features a ton of other basketball superstars, like Bob Cousy, Larry Bird and former Louisville coach Rick Pitino.
White Men Can’t Jump (1992) by Ron Shelton
Woody Harrelson stars as a former college basketball player who makes a living by betting on streetball games against other players who think he can’t play well because he is white. Wesley Snipes stars as his rival-turned-two-on-two partner. Alex Trebek—yes, the host of “Jeopardy!”—is also in this movie, and if that’s not an endorsement, what is? This is one of the most uniquely 1990s movies ever.
Coach Carter (2005) by Thomas Carter
“Coach Carter” is based on the true story of Ken Carter, the basketball coach of Richmond High School, who suspended his undefeated basketball team from playing because of their poor grades. Samuel L. Jackson stars as the titular coach, who faced backlash from the local community after forcing his players to focus on their academics. Rob Brown, Channing Tatum and Ashanti also star.
Like Mike (2002) by John Schultz
If you’ve never seen the movie, you’ve definitely heard the theme song, which famously began with “basketball is my favorite sport, I like the way they dribble up and down the court.” Rapper Lil’ Bow Wow launched his career in his role here as Calvin Cambridge, an orphan who finds a pair of sneakers with Michael Jordan’s initials inside. After a bully at the orphanage named Ox (Jesse Plemons, many years before his role as Todd in “Breaking Bad”) throws the sneakers over a power line, Calvin tries to get the sneakers back and is shocked by a lightning bolt—which magically gives him the power to be as good as Michael Jordan when he has the sneakers on. He ends up becoming an NBA superstar who takes on Vince Carter and the Toronto Raptors. Tons of other NBA players, like Allen Iverson, Jason Kidd, Tracy McGrady, Steve Nash and Dirk Nowitzki also make cameo appearances.