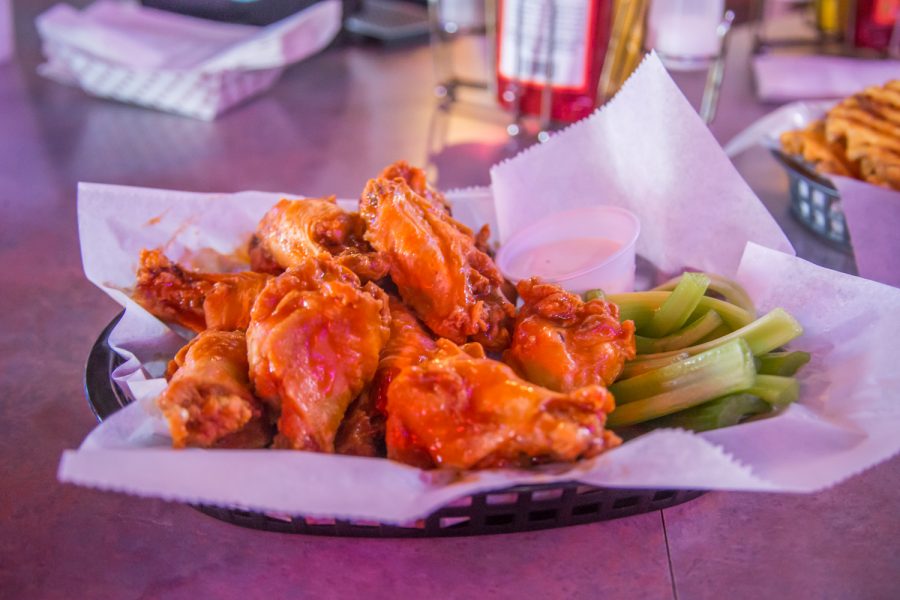 Wings at Billie's Skyline Tavern are 55 cents every Monday.

The Northerner inducts its first member to the Best of Northern Kentucky Hall of Fame for outstanding businesses with a strong connection to the community.

On a hill towering above campus sits an unassuming house. In fact, it’s the house on the tallest hill in Campbell County (no, really), making it an ideal spot for a bar named for a cityscape view of Cincinnati.

A white sign with classic black cursive invites passing cars up to “Billie’s Skyline Tavern,” where the parking lot is seldom empty and glowing Christmas lights are strung up year-round.

Post-basketball-game trips to Billie’s Skyline Tavern are a tradition older than the university itself—the house and its barroom additions date back to the ‘30s. In 1975, a fire sparked by a shorted-out neon transformer engulfed the main portion of the bar, burning away the roof. It was a disaster that would have closed any other business. But Billie’s isn’t just any business.

“We were open that afternoon!” owner Dave Sandhas recalled with a hearty chuckle. “With the roof off and everything. We took the cash register out on the porch.”

The burned-out flat roof has long since been replaced with a vaulted ceiling, which is now covered in no less than 40 metal beer signs. History lines the wood-paneled walls, from photos of Sandhas’ mother Billie to a red metal fire helmet hung above photos of the smoldering tavern.

Skyline Tavern was Sandhas’s childhood home and, at one point, housed four generations. After founder Cliff Guddorf died, his daughter Billie Sandhas, for whom the bar is still named, took over for the next 43 years. Dave, Billie’s son, took over in 2006.

Skyline, not to be confused with the chili parlor of the same name, serves up classic bar fare with down-home charm.

The Billie’s Famous Skyline Burger is a classic third-pound of beef piled high with classic fixins. There are variants, like the Cliff’s bratwurst burger, named for Skyline’s founder, and the veggie burger. Those pair well with the tavern’s fries, which are cut like a Chick-fil-A waffle fry but are fried and seasoned like an Arby’s curly q.

Sandhas said the tavern has endured thanks to its loyal patrons.

“I got great help, great patrons, the older crowd, the afternoon crowd drifts in and the kids that come over are awesome,” Sandhas said.

Behind the bar, the friendly staff ranges from students to recent grads—some of whom have worked at Billie’s for years.

Bartender and NKU graduate Christi Rodriguez has worked at Billie’s for four years, starting in her senior year while she was studying technical writing and art history in 2015. She said developing relationships with customers is most important to her at Billie’s.

“We’re like a family,” Rodriguez said. “Dave is like the best person I’ve ever worked for. I guess that’s why I haven’t pursued any other career choices. I just love it here so much.”

More recently, Sandhas said, when the bar was slammed after a high school basketball tournament let out at BB&T Arena, devoted regulars rolled up their sleeves to helped the swarmed staff. They hopped up from their beers to bus and wipe down tables during the rush. It was a gesture that touched Sandhas.

“We have the best customers,” Sandhas said, greeting one by name as he came through the threshold to the bar.

At any time of day, neon light from the electric bar signs bathe patrons as they swig Miller Lite and shots of Fireball. The fridge is stocked with craft brews from Rhinegeist to Braxton, and Miller and Bud flow from the taps.

Sure, it’s a bar. But it’s a lot more. Time seems to stand still (though the Budweiser bar clock is set a smidge fast) when brushing shoulders with the regulars at Billie’s, where a friendly ear, a hot sandwich and a cold brew always seem to be waiting. Though campus growth has somewhat cropped the view of the skyline, you can still see the Queen City silhouette six miles away, even on a cloudy weekday.

“As long as the doctor keeps me alive, we’re rocking,” Sandhas joked. “I hope it’s a long time.”