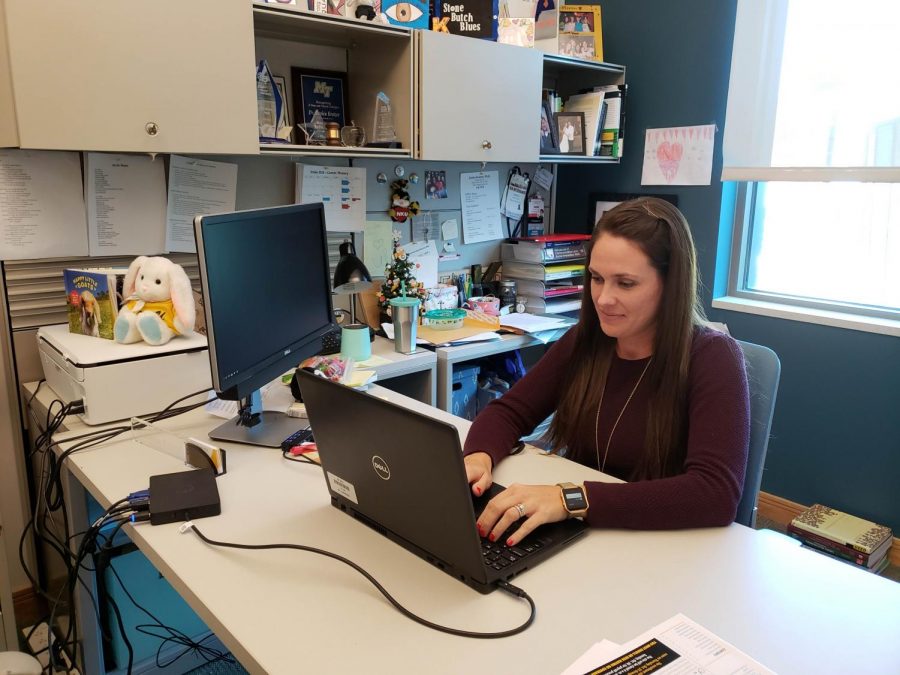 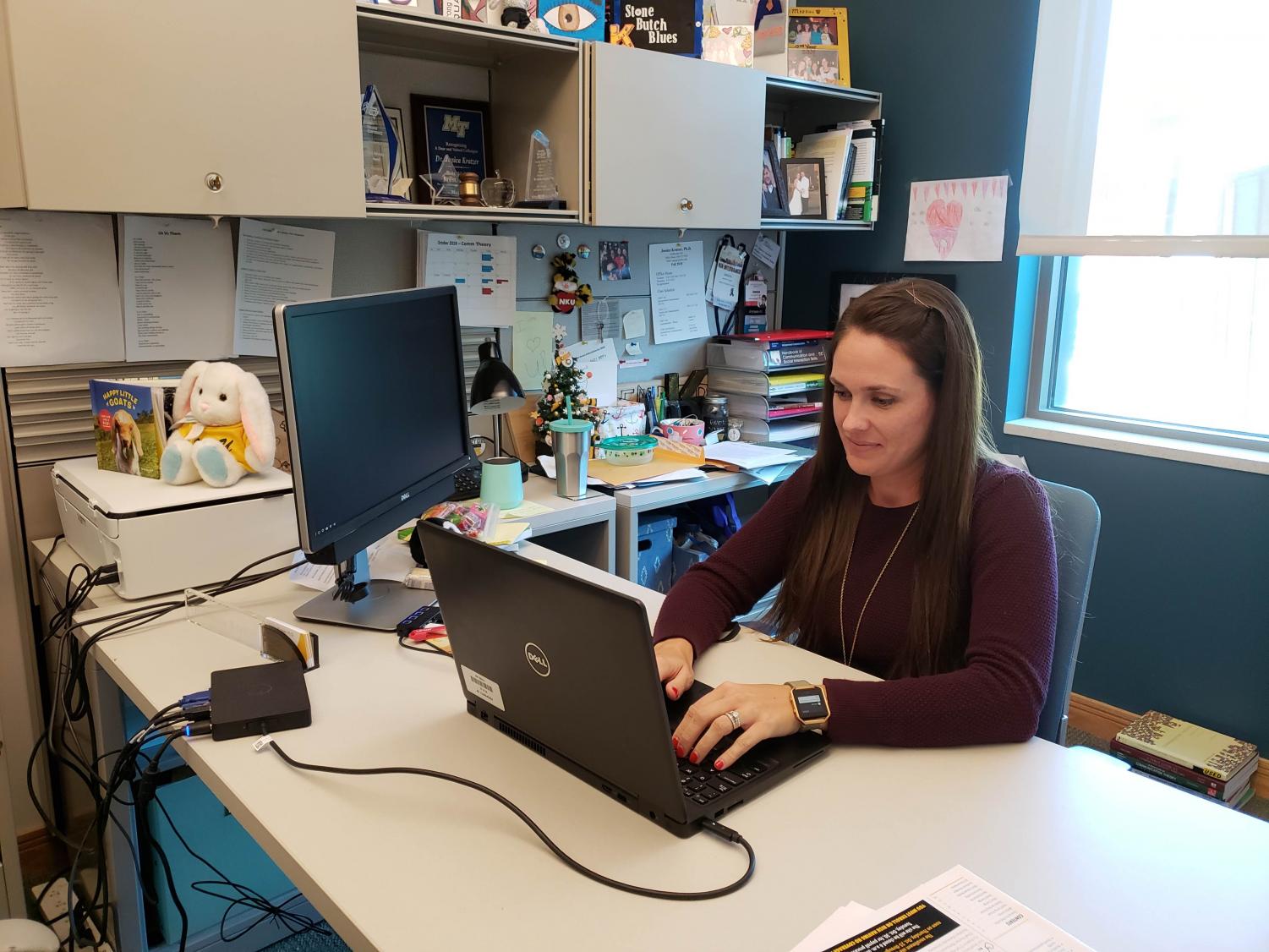 When a young girl started her period in the sixth grade, no one could explain to her what happened. Her parents didn’t reach out for a discussion. Her grandmother gave her a book that was supposed to answer all questions, but something didn’t seem right. She wanted to talk. She wanted to know. That moment has influenced the girl’s journey to become a teacher researcher in the field of sexual communication.

Dr. Jessica Kratzer was born in Independence, Kentucky. She received her bachelor’s degree. in Communication from NKU in 2002 and started her research on interpersonal communication with an emphasis on sexual communication.

When she was in her 20’s, her great-grandmother was seriously ill. With over 30 great-grandchildren in the family, Kratzer was the oldest and looked after great-grandma twice a week. She got a chance to get to know her better. One night, they were chatting and had a girl talk.

“There was this thought in my family: they wondered if she was pregnant when she got married,” Kratzer  said. “I know that she was super Catholic as well as my great-grandpa. I do not think they would have done that. So I just asked her, which none of my family were going to do.”

Her great-grandma told a detailed story that was captivating, rebellious and sexual; she shared that story for the first time since no one had ever asked. That night’s conversation ignited Kratzer’s curiosity and served her as an idea for her doctorate on senior sexual communication.

“How many people of this generation were told ‘you don’t talk about this’. You have this huge family that think ‘we can’t ask her about that, that’s inappropriate’,” Kratzer said. “Well, how many stories are out there that people want to tell and want to share? It made me think that I definitely want to do sexual communication and senior citizen aspect is important. That’s why I did my dissertation on it.”

After graduating from University of Cincinnati, Kratzer spent three years teaching at NKU as a full-time lecturer. After her doctorate, she worked for five years at Middle Tennessee State University on a tenure track. In 2016, Dr. Kratzer came back to NKU, and she has taught communication classes since.

Aside from the research on senior citizens’ sexual communication, Kratzer has recently focused on the hookup culture among college students, childbirth and postpartum issues and weight stigma. She believes that one of the main challenges that the younger generation faces is the issue of consent and the lack of communication.

“People don’t want to talk about it,” Kratzer said. “They can get completely naked with someone and do all the stuff and things associated with that, but not say a word about it. Nonverbals are all there, but no verbal communication.”

Kratzer’s parents raised her in an open-minded atmosphere. Through her teenage years and adolescence, she never hesitated to share and talk about intimacy related topics. She believes it’s important to communicate and educate children on sex in the family.

“I have college students whose parents either never talk to them about sex or give them a book. That sends a message that it’s not okay to talk about it. That underlying message that you’re given from the time you’re pretty small continues out through adulthood,” Kratzer said. “It starts at home. Parents should raise children talking about bodies, what it means and how they work.”

Kratzer is married and has a 7-year-old daughter, Jemma, and a 5-year-old son, Jett. It is okay in her family to see each other naked and talk about bodies.

“Of course, it’s all age appropriate. I have a 5- and a 7-year old,” Kratzer said. “They do not know what intercourse is. However, they do understand that boys and girl have different body parts and that women have their period. They get it, and for them, it’s not weird at all. It’s okay to talk about it.”

Kratzer believes that as her children grow up, they are going to be comfortable asking her questions and engage in open conversations. She hopes that it will make them more comfortable to talk to their partners once they grow older.

When it comes to her own personality, Kratzer thinks that sexual knowledge and education made her more understanding of the general experiences, lives and likes and dislikes of other people. As a researcher who aims to be non-judgmental, she became more open-minded and accepting of others.

Kratzer said that though many people perceive it as very dark, she learned a lot of useful information from the community about consent.

“What’s really interesting about that community is that you actually have to talk more, you have to communicate. Especially if you want to act something out, tying someone, or gagging someone,” Kratzer said. “You need to be able to say a safe word such as ‘I’m finished’ or ‘I need a break.’ You need to be able to communicate that with each other beforehand. We can learn a lot from it.”

Associate Dean and NKU Communication Professor Dr. Stephanie Klatzke has known Kratzer for 11 years. They are friends outside the professional establishment and their children took gymnastics classes together.

Klatzke said that people confuse their names all the time, and she often receives emails from Kratzer’s students. She believes that Kratzer motivates other professors to work harder and students are lucky to have her as a teacher.

“When she applied for a job and was doing her teaching presentation, she was killing us. She’s so good in the classroom that it makes us live up to her standard,” Klatzke said. “She’s innovative and enthusiastic. Her work is so important to her that it’s infectious to her students. She cares so much that students see a value. She’s going to open their minds.”

Dr. Stephen Yungbluth, NKU Department of Communication Chair, has worked closely with Kratzer since she was hired in 2016. He said he was raised with a little discomfort and awkwardness in regards to sexual topics, which made him do his own research and grow as a person. He believes that people like Kratzer challenge him to make sure that his beliefs are aligned with where he wants them to be.

“I may want to be really open-minded, but there might be times, since I was brought up in a different way, I might fall back in the past ways of thinking about the world,” Yungbluth said. “She’s so committed and passionate, she is a beacon that keeps me on the path I want to go.”