Thousands outpoured on the streets of Cincinnati for the second annual Women's March, which took place on the anniversary of President Trump's inauguration. 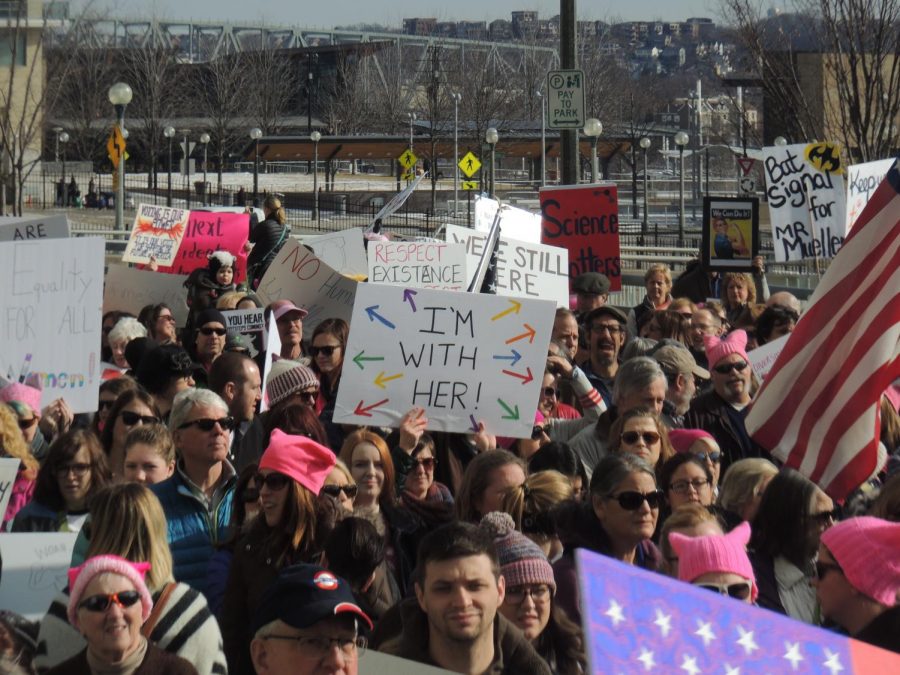 Protesters arrived outside of the National Underground Railroad Freedom Center at noon.

Arriving outside of the National Underground Railroad Freedom Center on Jan. 20 at noon, thousands filled the entire street of Freedom Way. They stood attentive, listening to guest speakers from the United We Stand organization; all were gathered to testify on the purpose of the Second Annual Women’s March: Equality.

As more protesters began to join the march, the amplified voices of guest speakers filled the air, rallying against the Trump administration in favor of equality for women, LGBTQ individuals and all races and cultural backgrounds.

The Women’s March took place on the anniversary of Trump’s inauguration; last year, the march focused on protesting the election of president Donald Trump. This year, the focus was bent more toward mobilizing voters to cast their ballots for the midterm November elections.

Scanning the crowd–signs backdropped the otherwise grey sky–the participants were as diverse as the messages they championed, both in age, race and backgrounds. For some, the event was a family affair.

Zoe Whelan, freshman EMB major at NKU, said she’s from a small town, and wasn’t used to seeing such a large crowds gathering. Whelan held a sign that said, “You haven’t seen nasty yet,”

“It’s only going to become a bigger movement as time progresses,” she said. “So, you haven’t seen nasty yet. This is just the beginning.”

As the event went on, the participants prepared to begin their 15-block march through the streets of Cincinnati, taking them from the Freedom Center to north on Race Street.  Onlookers stood on the sidewalks, some waving their hands or nodding heads in support. Voice rose and fell–chanters echoing one another: “Love not hate, makes America great,” and “This is what democracy looks like!”

Speaker Lesley Jones attended because she said she believes in women’s rights and equality for all women.

“Women have the capacity, I believe, to bridge all the gaps. Women don’t typically have an agenda, except to bring peace and love,” Jones said.

Each participant marched for their own personal reason, be it wanting to show their children strength in solidarity, to show their government that they won’t take disrespect anymore or to ensure that their voices were heard. The Northerner asked attendants why they were marching and what it’s like for them.