Professor: open-mic nights ‘about a human connecting with another human’

Since 2011, students and faculty in the creative writing department and beyond have shared their stories during monthly open mic nights, meant to make readers feel safe presenting their work. 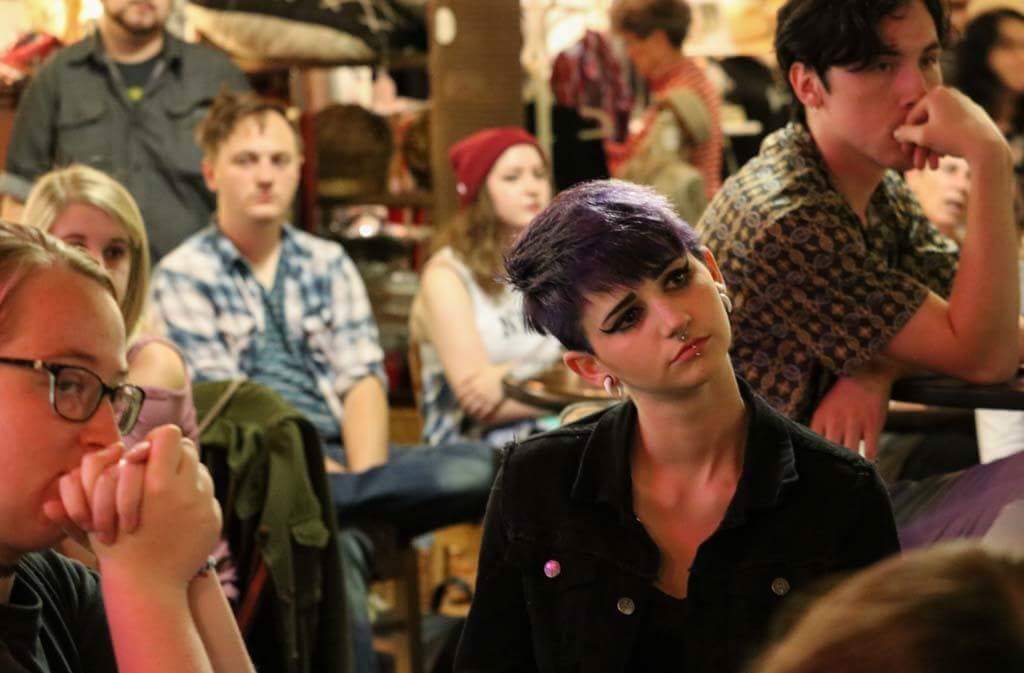 Students gather, roasted espresso beans, steamed lattes and alcohol lingering in the air, joined by the cacophonous sound of clinking glasses and footsteps against hardwood floor. A medium-sized, well-lit stage complete with a microphone. Nearby, the NKU creative writing staff sits awaiting what is about to unfold: an open mic night.

Once the first reader, usually the featured writer, walks on stage the crowd rustles to silence. Some go as far as closing their eyes to truly focus on the words being shared.

Some stories are beautiful, some funny, others personal and a few are heartbreaking. An array of work is read: poetry, fiction, memoirs and creative non-fiction.

This is the Loch Norse open mic night.

It first began in 2011, according to a coordinator of creative writing Kelly Moffett, when Jennifer Whalen, former editor-in-chief of Loch Norse Magazine–the student-based undergraduate literary magazine published annually–wanted to create a space for students to share their writing in front of a crowd.

“We weren’t sure anyone would show up,” Moffett said. “It was hosted at the Bow Tie Café then. We had a great turnout. From there we saw a beautiful community develop. People were supporting each other to read vulnerable material. Others got the courage to get up and read.”

Originally hosted on campus, Moffett said it was better to get away from NKU so they could create their own space and community. Later, the readings took place at Bow Tie Café before outgrowing the venue.

Jessica Hindman, assistant professor of English who specializes in creative nonfiction, joined the magazine and was able to relocate it to Highlander Coffee House. located within the Fort Thomas Antiques and Design Center.

When David Rigel, the outreach coordinator for the magazine, read for the first time in March of 2016, he said he had a lot of anxiety going into the event.

“The first piece I read was creative nonfiction called Defined,” Rigel said. “I was emotional and terrified. I had never read before. When I finished, everyone clapped. People were really listening to what I said. I got a hug from the staff. People told me they wanted to hear more.”

Now a multiple-time host, Rigel said he knows what it’s like for new readers. The staff, for this reason, has to be encouraging, casual and supportive.

“We really go out of our way to produce an atmosphere of acceptance and casualness,” Rigel said. “This isn’t an event where only the best can attend or read. It doesn’t matter what you read here. We just aim to inspire.”

Though he’s a creative writing instructor and a professional writer, Stephen Leigh said the first time you read in front of people is terrifying.

“They’ll say ‘Oh my god I have to read in front of everybody,’” Leigh said. “You do learn how to do it and the nervousness may not go away entirely, but you’ll start to enjoy reading your own stuff.”

Some students share more vulnerable work, which is accepted with open arms by the crowd as well–often eliciting claps afterward.

The same went for Hindman, who read “Advanced Placement” in spring 2017, a creative non-fiction piece about a traumatic event she experienced years ago that involved domestic abuse; it was the first time she shared the piece with anyone.

“I would say it’s a testament to how safe this department makes me feel and how safe I feel with my students to get up and share that,” Hindman said. “I wouldn’t feel comfortable sharing that in any English department. My students make me feel comfortable to share my real true writing and so do my colleagues.”

She said it was a piece about her students giving her the power to write about the trauma.

“It was only through asking my students about how they were going to write through their own trauma that I realized I can put this in form of an advanced placement study guide,” Hindman said. “Students make me feel more comfortable and because of that I hope we make them feel more comfortable.”

Moffett said she, along with Miller and Leigh, were able to see the environment become kind and accepting over time. She said when you witness others be supportive and loving, others begin to learn how to behave.

“Everyone accepts this environment,” Moffett said. “One generation of students teaches the next and so on. That kindness and support get passed on to the next.”

Andrew Miller, a creative writing professor at NKU, said that over the years he has felt more comfortable reading material he might not have read to begin with.

“In the past, I would not have read anything gay themed, but now I know it’ll be accepted,” Miller said. “So I know I’ll feel comfortable.”

Miller also said that it’s important for students to see their professors reading about these topics on stage.

“I’ve had people tell me that at readings, especially when I read something LGBTQ themed, it’s meant a lot to hear a professor reading something with those topics or themes,” Miller said.

Even though personal material is shared, a reader has never stopped and walked off stage.  With the support of others, readers continue despite how personal it may be. Moffett said it’s important that the staff attends, listens deeply and embrace them after a particularly difficult piece.

“After a very long work week, we are going there to give our full attention to our students because we care so much about them,” Moffett said. “I think that speaks volumes because we’re off campus, after hours and what we really want to do is listen to our students.”

As professional writers, Hindman said going on tour is normal after they get published, but she gets a bit more nervous reading in front of her students because they’re ones she discusses writing with throughout the week.

Moffett said even with having read at public events, reading to her students for the first time was a different experience.

“It makes you feel even more vulnerable because they’ll see you next week in class,” Moffett said. “They’ll remember the personal stories you’ve read. I think it’s taking even more of a risk because these aren’t strangers in a crowd, these are your students.”

Moffett noted that the process of reading in front of her students brings a sense of rawness as if she’s having a one-on-one conversation with them. In the same light, Miller said hearing professors read is important for the students.

“Sometimes we’re in the classroom and we say we do this, but I think the reading helps them to know that we actually do this,” Miller said. “If we get up there and read, then I would hope they’re more likely to read. We’re taking that same risk as they are.

He said the most important part is to build a sense of community among the students.

Leigh said it’s good for students to see that reading is a different skill from writing.

“Being able to read a piece and put emotion into it, or maybe even act it out a bit, is a good thing to do if you’re going to be in front of an audience to convince them to buy your book or read your story,” Leigh said.

After his first reading, Rigel said that it was from Hindman’s support that made him feel like his story was worth sharing.

“I’ve encountered thousands of personal stories,” Hindman said. “I specialize in creative nonfiction so it’s real life stories…I kind of feel my job is to find what’s special about their voice and help them amplify that voice.”

She also said that often the topics are the same, but every single student is telling it in a different way than anybody’s written about before.

Moffett said she values the individual human experience. She used an example from one of her my favorite books, The Courage to Teach by Parker Palmer, in which Palmer says that one thing teachers fear is to have live interaction with their students and instead prefer to keep distance.

“I feel when each student goes up to tell their story, we have this opportunity for live interaction,” Moffett said. “It’s an opportunity to connect and expand our perspectives and change.”

The open mic nights help students connect with others, relieve their nerves, share their work and create an atmosphere of acceptance.

“These open mics reminds us about what literature is,” Moffett said. “It’s about a human connecting with another human. We can’t hide.”