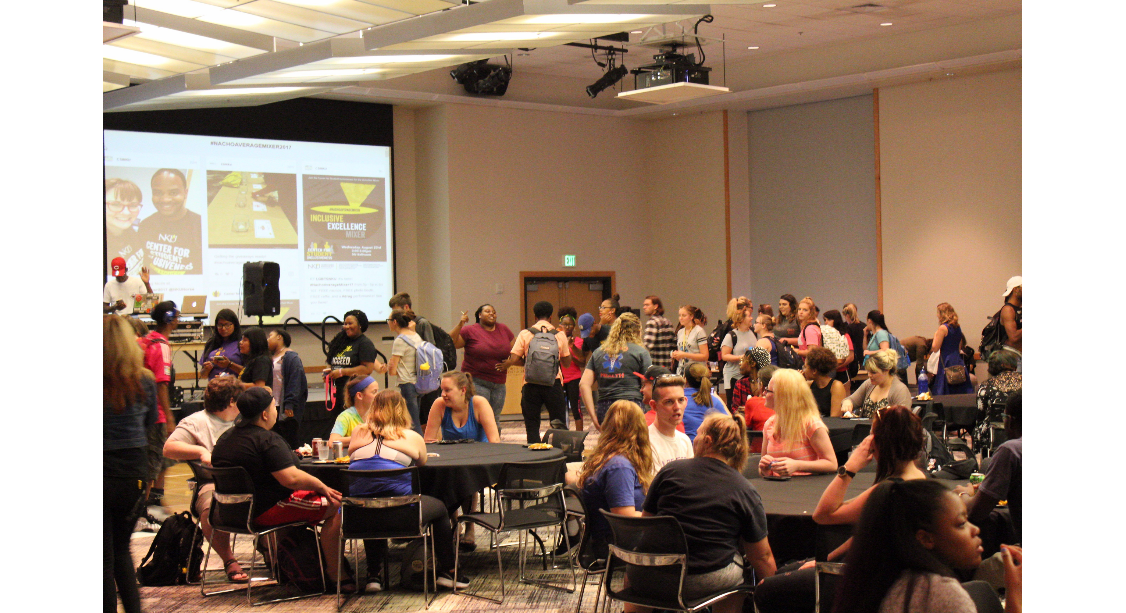 The Center for Student Inclusiveness holds the mixer annually during Victorfest.

The line to the nacho bar grew longer as more students piled into the ballroom. Those who didn’t head straight for the bar took a right to the photo booth. The beat of the music from the DJ’’s speakers vibrated through the floors, walls and the ceiling.

The inclusive excellence mixer, named #nachoaveragemixer, is held every year during Victorfest as a welcome back for returning students as well as incoming freshman.

Rachel Loftis, the coordinator for LGBTQ Programs and Services, said all the offices in the center for student inclusiveness are involved every year in putting this event together in what she called a “giant CSI effort.”

“It’s more interesting if you ask students if they feel included,” Loftis said. “Intentionally, we highlight who our students are. If they see themselves represented, then that’s one small thing you can provide for an inclusive atmosphere. We try to provide enough to be appealing.”

Even the mixer’s choice of food is meant to be appealing, Loftis said, including options for dietary accommodations like fruit for vegetarians.

Anthony Mize, coordinator for African American programs and services, said the goal of the mixer is to promote inclusive excellence and expose students to those programs.

“We believe we are creating an inclusive campus by having students interact with each other and the university,” Mize said. “Victorfest welcome week opens them to these resources and helps support them. More specifically, we promote CSI to make sure that inclusive excellence is our top priority. We build a community for the students.”

The mixer began when the event’s coordinators walked onto the dance floor and welcomed everyone. Tracey Stokes, director of African American Programs and Services, invited students to become involved with the programs offered by the center for student inclusiveness offer.

After the coordinators gave their speeches, dancing quickly became the theme of the afternoon. Sarah Jessica Darker, a drag queen performer for Cincinnati’s The Cabaret and former NKU student, opened up the dance floor with her performance.

Her act took her from the floor to the tables. She danced as the audience cheered her on. A few students unexpectedly found themselves joining her as she pulled them into her performance.

“I always love for her to have an entrance,” Loftis said. “I loved her in particular because she sets the tone and mood for the environment. For our students, we let them know that this is the kind of event that likes to showcase a little bit of everything.”

After her performance, the students and faculty danced throughout the entire event, only stopping when raffle prizes were announced.

Towards the afternoon’s end, the nacho bar was ransacked. The tables were littered with plates, empty cans, and napkins. Even as the mixer winded down, a few students stayed in the ballroom, mingling and gaining a connection with one another.

Noah Pittinger, a CIT student involved with LGBTQ programs and services, said it’s important for NKU to have events like these for the students.

“It’s important because it creates spaces for students to feel inclusive,” Pittinger said. “People are invited to be who they are here. This is a place for people to be connected with the center for student inclusiveness.”

With the event over, Loftis said she hopes the mixer allowed students to feel connected and included.

“I hope everyone had fun,” Loftis said. “I hope that people were able to kick back, hang out, see some awesome students, meet some new people and feel they could be themselves in a low-pressure environment.”