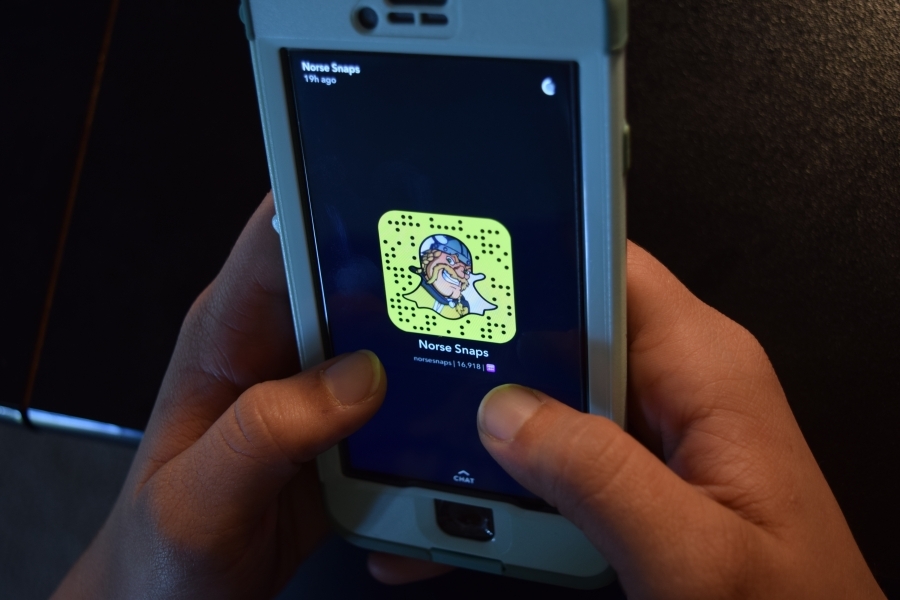 Norse_Snaps is an anonymous account on Snapchat; the posts target the NKU student body.

Students gathered to study when one pulled out her phone to scroll through Snapchat stories. Along with her friends, she viewed every snap on an anonymous account called “Norse_Snaps.” They began to laugh, only to later be disturbed by the more lewd posts.

The content within the snaps often come from followers and depict campus-specific jokes or friends hanging out. Submissions to the account also include more risque material including nudity, sexual content, drugs and alcohol.

Kenneth Katkin, a law professor at the Chase College of Law at NKU, examined the potentially illegal situations on Norse Snaps.

“The law would probably have the most interest in the person that is running this account,” Katkin said.

Since Snapchat is a third party vendor, the company cannot be held liable in most situations because they are not the owner of the content. However, If the account owner were to be revealed, they could face a civil liability lawsuit.

The account owner could face a lawsuit due to an invasion of privacy or public disclosure of facts tort, which is a wrongful act or an infringement of a right. This would relate to snaps that include nudity if they weren’t taken with consent. 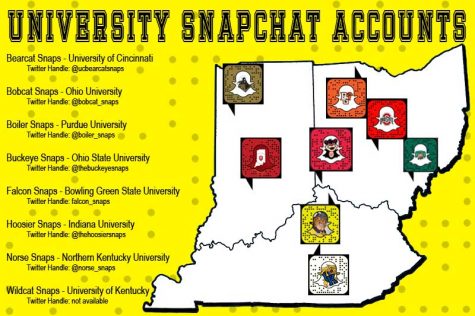 Other Snapchats on Norse Snaps depict drugs and underage drinking.The account owner and the substance user could face legal issue because the snaps would be considered proof of illegal activity. Regardless of if the use is done in private, it’s still illegal.

Another potential problem for this account could be within the name Norse Snaps. However, the account would be able to avoid trademark laws for Norse Snaps because the account holder is, most likely, not making a profit off of the account. However, to have a trademark infringement claim two things to occur.

Anyone is allowed to create commentaries, parodies, or satires because those are covered under the freedom of speech.

In response to displays of guns and weapons connected with a threat, the law distinguishes between true threats and false threats.

“True threats, it’s a crime and you can get in trouble for that,” Katkin said. “False threats, the supreme court has said, are a part of freedom of speech, as long as everyone understands that they’re false.”

If the threat was to cause distress and panic, that person who submitted the snap could be arrested.

According to John Gaffin, the NKU Police Chief, the department has heard of Norse Snaps because students have brought some of the snaps to their attention.

As Gaffin was having lunch with other university officers, he noticed that other campuses are also struggling with how to handle situations that arise from some of the snaps that they are shown from the account.

Gaffin recalled having lunch with other university offers and he noticed that other campuses are struggling with how to handle situations linked to these accounts.

“We can track it down. We can get search warrants and work with Snapchat,” Gaffin said.

From a digital perspective, Gaffin addressed that they have faced some of these situations in person, but that now they have to adjust to the situation being electronic and online.

“We don’t want anybody partaking in any criminal activity,” Gaffin said.

Some of the criminal activities that Gaffin referred to were drugs, underaged drinking, and nudity that was not consensual.

“To take a picture and document that you’re doing that,” Gaffin said. “What are people thinking when they’re posting this?”

Gaffin also spoke about the NKU Police Department’s cooperation with the Norse Violence Prevention  Center, in regard to social media and non-consensual nudity.

“We set out to do the right thing regardless of whether or not social media is involved,” Gaffin said. “You can’t go wrong by doing the right thing.”

Students at NKU have opposing views on the account and whether or not it should be allowed to exist.

Hollyn Scanlon, a student at NKU, is not supportive of the content that is typically posted on the account’s Snapchat story.

“I think it really should just be deleted,” Scanlon said. “It’s degrading to most people.”

Scanlon’s least favorite things posted on the account’s story are the snaps that include nudity.

“When it starts to become a little more X-rated, that to me is not okay,” Scanlon said. “I don’t personally like it.”

Scanlon understands that others are allowed to post what they want to on social media, but is reluctant to follow the account on Snapchat again.Brittney Gunter

“If you’re posting that about yourself then you probably don’t mind,” Scanlon said. “But we shouldn’t be encouraging that either.” 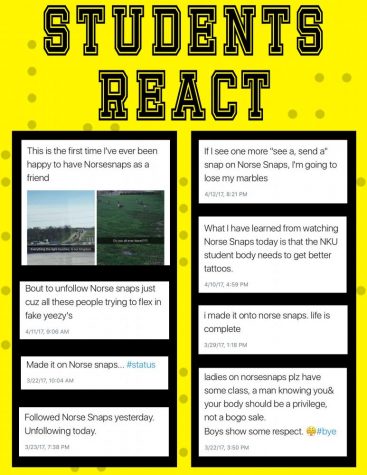 Lauren Hendrix, a student at NKU, enjoys the content because she see’s on the account as a way to start a conversation and connect with others.

Hendrix’s favorite things posted on the account’s story are pictures of animals, especially dogs, but she also finds some of the content to be helpful.

Some other helpful things that Hendrix mentioned that the account posts to their story are plays, events, and lost or found items.

“It’s a way of expressing ourselves and even though it’s really strange and can be really raunchy, it’s still a way of expression,” Hendrix said. “I prefer not seeing it all of the time, but it comes with the territory and you know that going in while using Norse Snaps.”

Hendrix has decided to accept the fact that Norse Snaps is a part of the NKU community and that it will not be going anywhere anytime soon.

“If people do try to shut it down, they’re just going to open a new one,” Hendrix said. “People enjoy having it, and I know that not everyone will admit to the fact that they enjoy it but they do.”