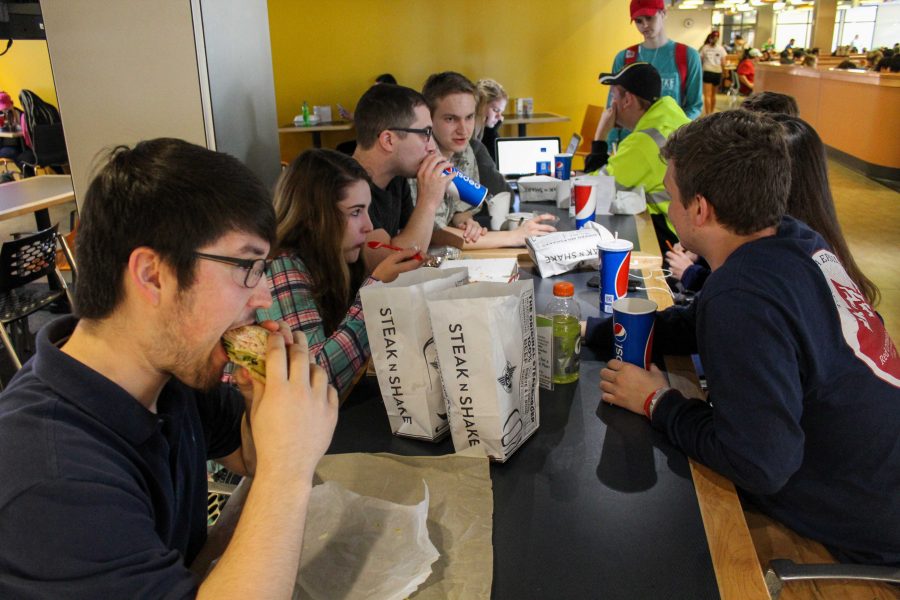 Students eat from a variety of restaurants in the Student Union including Steak 'n Shake and Mondo Subs.

Editor’s Note: Nicole Browning is the Assistant Arts & Life Editor of the Northerner, and she is a vegetarian.

Finding a nutritious meal on NKU’s campus is often a challenge for Autumn Baker.

Baker, sophomore sociology major, became a vegetarian her senior year of high school when she started doing research on the topic, and is currently transitioning into a vegan diet.

A residential student last year, Baker found it difficult to eat vegetarian on campus all the time.

“It was close to impossible even eating vegetarian, because I gained so much weight because everything was processed or just cheese,” Baker said.

This year, Baker lives off campus and can cook her own vegetarian and vegan meals. When on campus, Baker said she typically eats a grilled cheese sandwich and soup for lunch.

“As far as here at NKU, it’s still a little challenging, but I get by,” Baker said. “It just gets old after a while.”

Baker isn’t the only NKU student that struggles to find options that fit into her specific diet on campus.

Lily McDonough, junior marketing major, doesn’t consider herself a vegetarian, but prefers not to eat meat if she doesn’t have to, for both ethical reasons and because she doesn’t like the taste of meat.

“The only reason I haven’t gone completely vegetarian is that my family, they don’t eat a lot of meat, but when they do, it’s really hard for me not to eat with them,” McDonough said. “Or when I go to other people’s places and they eat meat, I feel rude not eating it. But if I don’t have to, I won’t.”

McDonough also used to live on campus and found the options in Norse Commons to be limiting.

“Their vegetables didn’t taste good at all. Either they were hardly cooked or they were really mushy,” McDonough said. “It actually was hard to find options that I couldn’t have meat with. So I eat a lot of soups. And even then, sometimes, they put meat in it.”

Despite her problems at Norse Commons, McDonough said she thinks the options are decent on campus, stating that she likes to get pasta, california rolls or french fries for lunch.

Trevor Turner, junior double major in finance and statistics, doesn’t eat on-campus often. When he does, he also goes for soups and pasta, but feels that there aren’t any meat substitutes provided.

With options like sofritas (vegan/vegetarian option containing tofu) at Chipotle, veggie patties at Subway and veggie chili at Skyline, Turner feels the options are not limited in the community.

“Restaurants around campus are kind of accommodating toward vegetarians and even vegans, but on campus it’s kind of tough,” Turner said.

Turner said his brother, who is vegan, convinced him to become a vegetarian, and that he has been since the beginning of May last year.

“[It was] Mainly for health reasons,” Turner said. “There’s definitely ethical reasons, as well. But I’d say more health than ethical considering I still eat animal bi-products. I hope to become vegan after I graduate.”

As a male becoming vegetarian, Turner said he was met with resistance socially when he made the change.

Not being a full-blown vegetarian, McDonough still said she has experienced negative reactions from her eating choices.

“A lot of people are like, ‘You don’t eat Hamburgers, that’s so un-American!’” McDonough said. “They think I’m short sighted … they think it’s weird, the reasons why I do it, or if I don’t have a taste for it, they’re just like, ‘Well, that’s just strange.’

“You can question it all you want, but that’s the way I choose to live, and you can choose the way you want to live.”

Sarah Napier, sophomore and criminal justice major, is not a vegetarian or vegan, but admires others who choose that lifestyle.

“More power to ‘em, because I think they do a great job having the willpower to do it,” Napier said. “I would if I didn’t like chicken so much. I like the idea of it, it’s just, certain things I don’t think I could get rid of.”

Baker said she thinks a lot of the resistance with the vegetarian movement comes with people wanting to be in the dark about the issues.

“I feel like people don’t want to know about the harm that eating meat does, not only to your health, but the environment, so they choose not to listen,” Baker said. “But I try to spread awareness in any way I can.”

Baker said part of why she decided to become a vegetarian is the environmental impact that eating meat has on the world, including animal agriculture being a huge contributor to climate change.

According to the Environmental Protection Agency, domestic livestock produce large amounts of methane gas, one of the main greenhouse gases, as a part of their normal digestive process.

Nationally, agriculture accounts for about 9% of greenhouse gas emissions, behind electricity, transportation and industry. Furthermore, on a global scale, the agriculture sector is the primary source of methane emissions.

Another factor Baker mentioned was the impact animal agriculture has had on deforestation.

According to NASA’s Earth Observatory, “The single biggest direct cause of tropical deforestation is conversion to cropland and pasture, mostly for subsistence, which is growing crops or raising livestock to meet daily needs.”

Furthermore, Baker explained that while some people think that they’re doing more for the environment by buying organic or free-range meat, it’s actually less sustainable to raise meat this way because of how much more land it takes to humanely raise each livestock.

“I decided it’s not about my preference anymore, it’s about my responsibility for the future of the environment,” Baker said. “Killing an animal for food is definitely how we survived originally, but that was when there were thousands of people on Earth, not 7 billion.”

Celeste Manning, marketing director at Dining Services, works for Chartwells in coordination with NKU, and explained some of the Chartwells’ sustainability efforts.

Project Clean Plate is designed to raise awareness for students not to waste food.

On April 20, two days before Earth Day, Norse Commons will host a “Project Clean Plate” awareness day, during which someone will sit by the dish return belt in the facility and hand out gifts to those whose plates are clean.

Manning also said that Chartwells uses a label system to indicate whether or not a food is vegetarian or vegan at most locations except the national brands like Einstein Bros. Bagels.

While the labels are indicative of whether or not the option is vegetarian or vegan, Manning said Chartwells could not indicate whether or not the food was made with sustainable ingredients because the menus are controlled on a corporate level.

“We’re definitely willing to look at the menus and see if there’s other menu items that we can offer,” Manning said.

Baker said that she thinks if people were more aware of the damage eating meat causes to animals and the environment, the options would be a lot better.

“We can’t ignore it forever. It’s not sustainable,” Baker said. “It’s going to start showing effects sooner or later. I think it’s really important that people start paying attention now before it gets too late.”