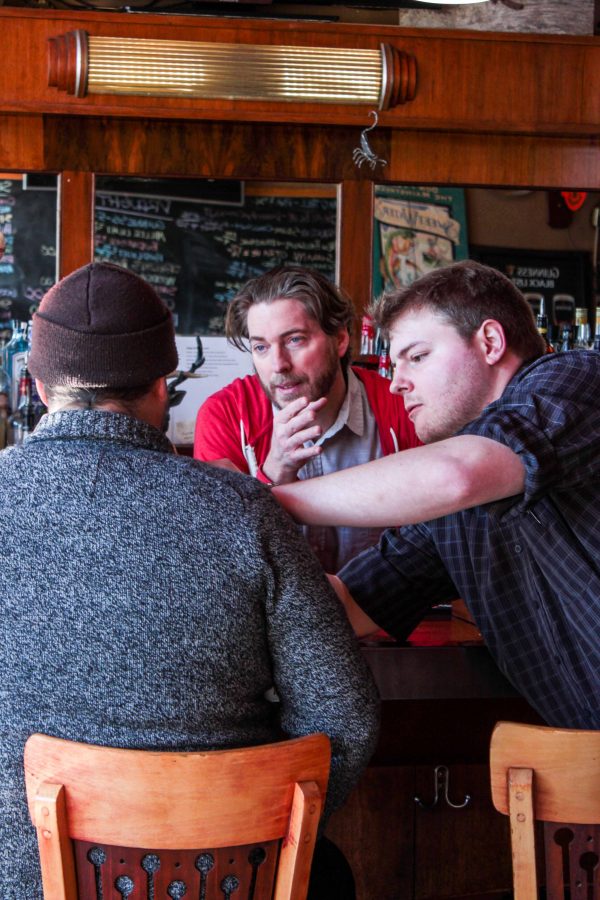 Weller gives directions to one of his actors while a crew member adjusts his microphone.

With a dream to make it big in the TV industry, Blaise Weller’s production “FixAte” is slowly progressing into a series, fueled by his passion for writing and film.

“I think the writing and the people I’ve gathered around it, everything from the crew to the cast, we can compete with Orange is the New Black,” Weller said. “The dream would be to surpass that, and compete with Breaking Bad.”

“Which, you know, that’s shooting for the stars if you ask me.”

“FixAte” came to fruition when Weller, English professor at NKU, wrote the script a little over a year ago. He has since decided to combine his love for writing with his love for film and direct his own series.

“Through the study of film and becoming fascinated with film, to me it was the natural progression because I’m always seeking to kind of evolve and challenge my craft,” Weller said. “I’ve been doing script writing for several years and this project just stuck with me and I knew I had to do it.”

“FixAte” is a psychological thriller examining obsession in the human condition. It’s centered around a group therapy session in which all the patients are obsessed with someone else — one patient being a serial killer.

The series also has a mystery aspect that Weller said is equally important as the viewer unravels the truth behind each character and discovers their flaws.

“The whole behavior [being obsessed with somebody], I think, is fascinating,” Weller said.  “It tells us a lot about ourselves.”

Reaching out to the community

Weller is collaborating with a multitude of members from the community including his colleagues, NKU alumni and members of Norse Film Society.

“That humbling realization of how many people have jumped to help with this project has been overwhelming,” Weller said.

One actress, Blair Godshall, is an NKU alumnus and was connected with Weller through an NKU staff member. She always wanted to study film in the past but was preoccupied with theater.

“That’s something I’ve seriously been wanting to pursue for a while,” Godshall said. “I just love how it all works. I love being on the film set because it’s so different from theater. And so I like it now because it’s just so new to me.”

Godshall plays the character of Tina, who is in the therapy session with her partner, Tommy.

“It’s kind of awkward that a couple would be in a therapy session together as far as this kind of obsessive matter. But their relationship is that sort of need for control over one another,” Weller said. “She [Tommy] shows up at Tina’s work and causes trouble because she’s afraid that Tina’s cheating her, that somebody’s hitting on her.”

Weller said Tommy is one of his favorite characters because despite her controlling nature in her relationship with Tina, she has a big heart and overcomes adversity.

“I guess the reason that she’s my favorite is because, more than anyone else, that character comes to terms with who they are and finds a way to use what we seemingly see as weaknesses to become strengths, and she triumphs in the end,” Weller said.

Godshall said she is excited to learn more about her character because Weller is intentionally not revealing everything to the actors initially.

“I’m looking forward to discovering what’s next with my character in the story and how it ties into everything else. I’m excited for the big reveal of it, because, gosh, there’s so much,” Godshall said.

Weller said he hopes to see the show picked up by Netflix, Amazon or HBO, but that currently their main focus is to get a trailer together and get their GoFundMe page up.

Godshall said she would be excited if the show was picked up, and is excited to be working with people who are serious about the project as someone who is first breaking into film.

“That’s great that he’s going for that, because it’s very difficult, especially when you’re doing a smaller, independent project like this,” Godshall said. “I feel like that gives me a lot of confidence in this project, that I’m working with professionals and I’m working with people who are dedicated and serious about this.”

Lukas Meyers, junior electronic media and broadcasting major, has been helping in production of the series and is also excited about being a part of the project.

“Even if it doesn’t make it anywhere, it’s still just fun to be part of production and just do something film-wise,” Meyers said. “I feel like there’s definitely a lot more spirit if you film…actually playing the story out and making it come to life and seeing it, I just feel like it’s more special, in a way.”

The spirit of discovery

Weller said his favorite part of directing this series thus far has been the journey of discovering and learning from his triumphs and trials throughout the project.

“Entertaining an audience to perfection, knowing that that’s not an easy task and that many things are going to go wrong, but what you discover along the way, the spirit of discovery, is what has been the most exciting thing to me,” Weller said. “You figure out what you’ve got to do to fix it. Which coincides with the whole theme of the show.

“That fascination of what can happen, and what you can learn from the process.”

Weller advised others in the film industry and in life to pursue their dreams with the spirit of discovery, as well.

“Have that attitude of discovery, and you can’t go wrong,” Weller said. “So go for it. Whatever it is that drives you, whatever passion you have, if you can see that your failures, or not necessarily that the outcome is perfect, but that you’re moving toward this passion, then you learn every step of the way.”