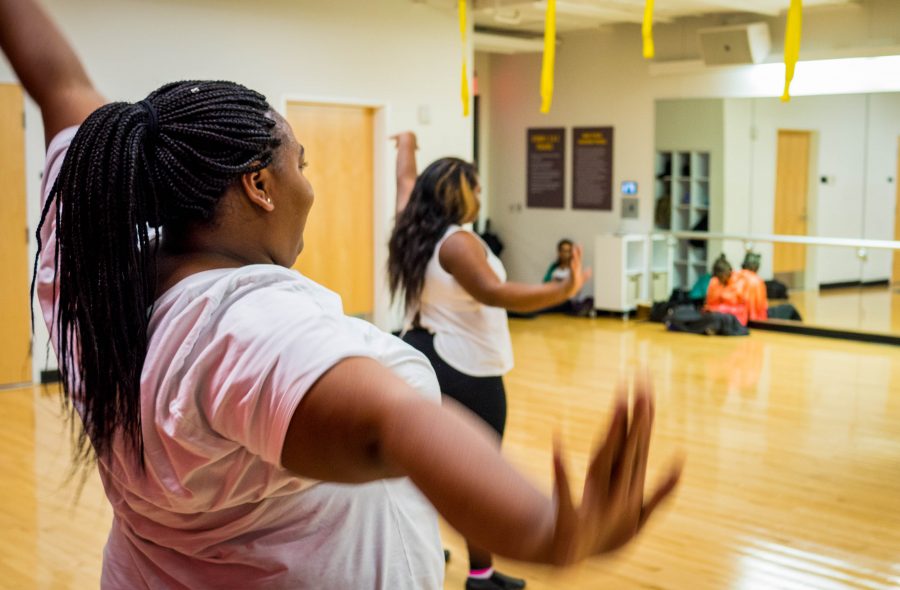 The Northern Stars Dance Team goes over new moves in the Rec Center.

The Northern Stars Dance Team meets up at studio three in the Campus Rec Center Monday night for practice.

The dancers look at their reflections in the mirror that covers the wall as they go over new dance steps.

Xala Sledge, founder of the eight-member team, walks in a few minutes late and watches the practice for a couple moments before gathering everyone to ask them about Friday night’s performance at the women’s basketball game.

She receives a few puzzled stares.

“Everybody has their personal life and they want to do what they want to do, but you’re kind of dedicated to this team, you signed up,” said Xala, senior organizational leadership major.

Trying to get everybody organized and available for performances is just one challenge the student-run team faces.

The girls have to schedule their practice space with the rec center. They practice three times a week, two of the days at 6 a.m., self-funded and continually  choreographing new dances to fit the array of songs that will be played during the games.

“Say if I see something then I’ll probably make a dance up and I’ll just bring it to practice and we just go from there and people can add-on, take-off.  Whatever they feel comfortable with,” said McClaine, who first joined the team last year.

“Coming from an HBCU, I just wanted to bring some of my culture and life to NKU with me,” Xala said.

Xala, the manager of the women’s basketball team at the time, decided to start the group after encouragement from those on the team.

“The women’s basketball team was fully behind me so I just decided to push forward and I got everything done within the deadlines,” Xala said.

D’Yanna Sledge, Xala’s sister, joined Northern Stars after hearing her sister talk about it despite never having done anything like it before.

After their humble beginnings D’Yanna didn’t expect the Northern Stars to be where they are now.

“The African American community at NKU is so small and Northern Stars is geared toward everyone but the majorette style of dance is seen more in HBCU’s and so not many people know about us,” D’Yanna said.

Even the team’s uniform has evolved over the past three years, from pants and a t-shirt to an actual uniform.

The team performs in the stands at every basketball game they can Xala said, because it’s the biggest sport at NKU.

“If we had a football team then we would dance at the football game but because we don’t basketball is the number one sport here,” Xala said. “I wanted to get as many students involved as possible so that’s really where that came from.”

Xala said she would like to see the team perform in parades or competitions, but the team isn’t quite there yet.

“You’ve got to start somewhere local and then you’ll be able to grow bigger,” Xala said. “Hopefully one day we will be part of the university, not just a student organization.”