How taekwondo changed a student’s life 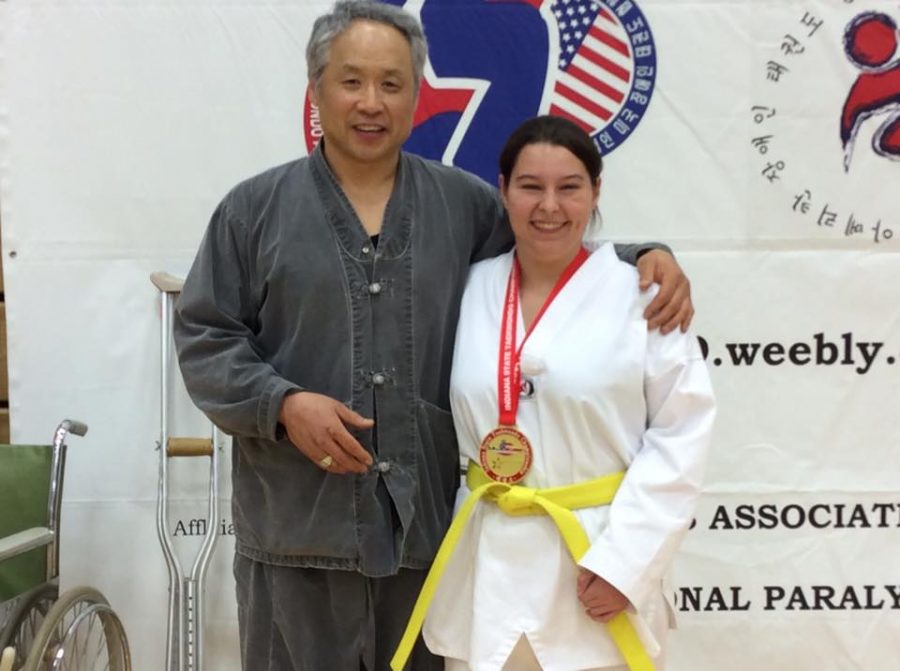 One of the reasons why Fightmaster is so passionate about taekwondo is because of her instructors and teammates, she says they're family.

She grips the red handle tightly, extending the white tip further in front of her. The fading sun eliminates the remaining light and as evening sets in, Clara Fightmaster makes her way from the science building. She felt watched.

Are they staring at me?

Do they think I’m weird?

Are they laughing at me?

Her mind continues to race as defeat sets in. Fightmaster, a senior theater major and minor in EMB, is legally blind.

She has retinitis pigmentosa, which refers to a group of inherited diseases causing retinal degeneration, according to blindness.org. The condition makes Fightmaster colorblind and she doesn’t have peripherals. She also has a cataract in her right eye and has night blindness.

That defeat vanishes once Fightmaster takes her first steps into the NKU Rec Center. She prepares to put all her energy behind kicks and punches, concentrating on mastering the technique of taekwondo.

The NKU taekwondo club is one of Fightmaster’s safe havens. Every Thursday and Friday the members meet at the Rec Center to hone their skills for competition. She feels most comfortable training with her team, who support and accept her.

“I’m awkwardly self-conscious of my cane because most people are not educated about it,” Fightmaster said. “Some people ask me really dumb questions and I get frustrated. I try to educate people but there’s just moments like ‘Haven’t you seen a movie or read anything with a blind person in it?’”

Fightmaster can see when there is enough light, but after the lights go out, so does her vision. She can’t see fine details.

“Me trying to read a piece of paper or trying to write on one is very difficult,” Fightmaster said. “Walking at night is always fun. I used to be used to it but now I have to walk to the science building and I get so lost. I always want more light. I always have problems with steps, too.”

She was diagnosed in 2010 and her vision has steadily deteriorated since.

“Being blind is very hard to deal with because I was diagnosed when I was 16,” Fightmaster said. “That’s when you’re doing all the cool things like getting to drive and stuff. I didn’t get to experience that.”

The worst part after being diagnosed, she said, is having to relearn how to do everyday activities.

“With my computer I used to able to function completely without noise and stuff but now I have to have audio on it all the time, in order for me to use it,” Fightmaster said. “It’s not that bad because I can still do stuff, it’ll suck when I can’t do stuff. It’s adapting that’s the sucky part too.”

Fightmaster said that Disability Programs and Services has been helpful getting her adjusted. She has always had trouble taking tests, but Disability Services found ways around her struggles.

“When I’m taking a course they give certain accommodations, like I’m allowed a scribe so someone can take my notes and I have extended tests times so I don’t have to struggle, which is really nice,” Fightmaster said. “Taking a test takes forever. They do really well and they take care of me.”

Director of Disability Programs and Services Cindy Knox said the department works with a lot of campus resources to make sure facilities are compliant and as accessible as possible.

“Not only is it scary to start college, it’s extra scary to have a disability that may limit you one way or another, that you need help with,” Knox said. “Students who feel they are not the typical college student starting out, can feel unwelcome. So feeling support is crucial.”

Knox said they try to connect students and bring the community together to show they are fully supported.

“We hope that the stigma surrounding disabilities gets alleviated,” Knox said. “One of the biggest things that other students can do to help erase that stigma is to be supportive of everyone. The word disability can be harsh for some people, we don’t want that to affect them.”

Fightmaster believes that everyone should be accepted in some way.

Fightmaster wishes that, as a whole, people would be less judgemental and more accepting to those around us. She pointed out that people often lose insight to little things they’re privileged to have, such as the ability to see.

“There’s five values of taekwondo that I think everyone should follow: Courtesy, integrity, perseverance, self-control and spirit,” Fightmaster said. “It shows who you are as a person. In taekwondo when you’re fighting, you keep those in mind and they make you stronger.”

Getting strong and going for the gold

Although her blindness can be a challenge, it didn’t stop Fightmaster from winning a gold medal at the Taekwondo National Championship in Indiana.

“There’s a long list of what got me so passionate about taekwondo. It’s just that I love the fact that I’m accepted as a person,” Fightmaster said. “It’s just having the friendships. That’s my family. I spend probably over 40 hours training with them, every week.”

Alexa Hodge, an assistant instructor of the taekwondo club, said she encouraged Fightmaster to join.

“I love Clara because she’s so dedicated and I greatly appreciate it and how she overcomes every obstacle,” Hodge said. “She got involved very intensely, very quickly. Everyone was really impressed.”

Fightmaster is able to stay motivated knowing that she is representing NKU and its students and professors.

“I feel like when you go to competition you want to do your best,” Fightmaster said. “While getting medals is great thing, it’s not the medals. It’s the experience and being able to say I did that, that I care about.”

Fightmaster said that without the club, her family, she probably wouldn’t be as happy as she is today.

“The one reason why I probably love taekwondo is the group of people,” Fightmaster said. “You’re a family and all see the same struggles. The harder it gets, that has to motivate everyone more.”

Although her focus is more on getting stronger, Fightmaster says winning the medals is like the cherry on top and she is very excited to see how far she will go.

Because Fightmaster placed first in Nationals, she is number one in the nation as a para-athlete or disabled athlete. Fightmaster also won gold in the able-body competition, which is for nondisabled people. In 2019, Fightmaster will be competing in the Pan American Games in Peru, which could qualify her for the 2020 Olympics in Tokyo, Japan.

Every time Fightmaster goes to a competition, she always feels inspired and positive energy from all her supporters.

“I always have to drag my cane with me, but that’s the only time I feel comfortable with it,” Fightmaster said. “People look up to me, which makes me feel so much better. There will be children at competitions who don’t even know me and they’re like ‘Congratulations, good job, you did so well’ and it’s so cute.

“It’s just cool to see that I can make an impact. If people see me doing it then they’re going to want to get involved and know that they can do anything, too.”