GALLERY: A look into the senior art projects 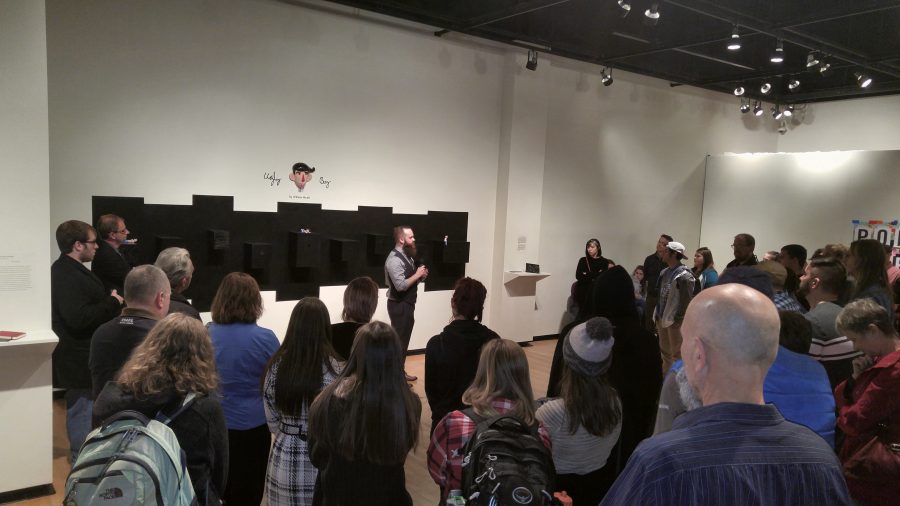 As students rush to finish assignments and cram for final exams, nine seniors from the School of the Arts have already completed their work, currently on display for all to see.

Made up of painters, sculptors, photographers, and an array of artistic visionaries, the nine seniors’ final portfolios cover a variety of themes. Their final portfolios reflect each of their own personal progresses through their college careers.

The exhibit began with an opening ceremony on Dec. 1 followed by a reception that drew well over a hundred people throughout the night. The ceremony included brief introductions and explanations from each of the artists as well as question and answer sessions.

After the opening reception, the artists remained near their displays while the guests mingled and enjoyed the conversation that the art had evoked.

One remarkable piece that people enjoyed was a project called “Ugly Boy” by William Mudd.

Nine black boxes were displayed on a wall in the Main Gallery, each with an eye hole in the front and a crank on the side. When attendees looked into the boxes and turned a crank, an animated scene would come to life, showing the “Ugly Boy” character in different scenes.

In his artist statement, Mudd said that the average time a person looks at an artwork is seven seconds. With the interaction between the viewer and his artwork, he hopes to hold the eyes of his audience for just a moment more.

During the ceremony he explained that the “Ugly Boy” projects the feelings of how being in your early 20s feels.

“The simple cartoon aesthetic of the ‘Ugly Boy’ is a nod to how enjoyable this time of life can be,” Mudd said. “While the environments are rather mundane, each box calls desperately for change.”

Benny Poynter, another 3-D ceramic artist, created several life-like sculptures of animal heads for his final portfolio. The ceramic sculptures were mounted on walls. An enormous elephant head taller than Poynter was the centerpiece of his display.

Across the hallway from the Main Gallery is the Third Floor Gallery, a smaller space which displayed the artwork of Ian Herman and the photography of Chris Hughes.

In his photos, Hughes captures the precious places and buildings that live in his memories of his hometown of Ashland, Kentucky. The house he grew up in was recently sold out of his family, closing an important chapter on his life that Hughes hopes to preserve..

On the other side of the gallery is Herman’s work. His project titled “Out of My Comfort Zone,” includes images, screenprints and drawings of a cartoon man with a long white beard, a staff and robe in various settings.

“The character is an image representing how I find myself in nature,” Herman said. “I seek to convey the timeless quality of the outside world. The beauty, and all that I’ve learned from it.”

Although his work may seem very advanced, Herman had not discovered printmaking until he was a student at NKU. Since he discovered it, he has dived deep into the printmaking world.

“I’m able to find my identity in a way through this craft,” Herman said. “Just like how I am such a tiny part in the whole world, each stroke I create is a small part of the bigger picture.”

These nine artists will have their work displayed in the galleries until Dec. 9, when they will take them down and move onto whatever the future may hold for them.