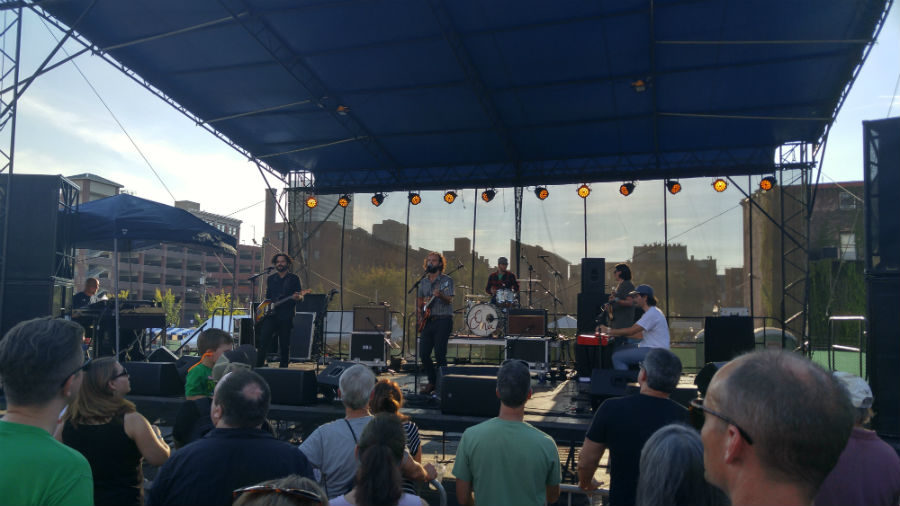 Huntington hard rockers Ona put on an incredible performance for their fans at the WNKU stage at MidPoint Music Festival this year.

Just slightly removed from the MidPoint Music Festival’s main stage, a smaller performance space was set up in the adjacent parking lot.

The stage belonged to WNKU, a local radio station with a focus on showcasing music based out of the Greater Cincinnati region. WNKU sponsored one of four stages at this year’s MidPoint Music Festival on Sept. 23-25 in Over-The-Rhine.

For the first time, the festival was held in an area of OTR in between Sycamore Street and Broadway Street in order to keep it centrally located.

Many of the bands that performed on the WNKU stage were favorites of the radio station, including the Huntington, West Virginia-based band Ona.

“We really owe so much to thanks to WNKU,” said their singer and guitarist Bradley Jenkins. “They made our album their CD of the month last month, and they’ve been playing our music a lot on the air. We actually get WNKU all the way down in Huntington.”

Music lovers of all kinds were excited to attend the first day — to see its new location and to share their love of music with everyone in attendance.

As patrons entered the festival, they had the option to go into the venue where three of the four stages were located, or walk down Sycamore Street, enjoying their share of food, drinks and merchandise that were open to the public.

Vendors were serving everything from sweet and savory crepes to ginger ale infused Pepsi, as well as band merchandise from most of the performing artists.

At the end of the two blocks of vendors and booths was the free Eli’s BBQ stage, which featured mostly Cincinnati-based acts like the local garage-punk three-piece Leggy, or folk singer Royal Holland from Newport, Kentucky.

Many people who did not buy tickets for the festival were still out enjoying what free amenities were being offered to the public.

Sarah Padmore is a Cincinnati native who lives just down the street from the festival’s new location.

“It’s really cool that they are inviting the whole neighborhood to come and enjoy this festival,” Padmore said. “The fact that this stage is free and that all of the vendors on the streets are open to the public is the whole reason I came out today.”

Located near the free stage was a food booth where hungry music fans could enjoy the local sponsor, Eli’s BBQ, one of Cincinnati’s most popular BBQ restaurants.

The other three stages were fenced in, and hosted all of the larger national acts. For the first time in MidPoint’s history, all of the stages of the festival were within a two block area.

In one large parking lot sat the two biggest stages, The Skyline Chili Stage and the Central Parkway YMCA Stage.

Throughout the night, these two stages saw a wide variety of performances from musicians of all genres.

The folk band Cereus Bright, from Knoxville, Tennessee, kept the crowd moving after an amazing performance by The James Hunter Six, a soulful R&B group led by English frontman James Hunter on guitar.

“This is the third year I’ve been to MidPoint, and that was the best show I’ve seen any performer put on,” said Elliot Marrow, a volunteer checking wristbands at the VIP tent. “They have such a strong stage presence, and for a younger festival crowd, those older dudes sure put on an amazing show!”

As the sun went down, the crowd continued to grow as Tokyo Police Club took to the YMCA stage, where the Canadian four-piece electrified the crowd with an incredible show.

The night was capped off with an outstanding performance by the Friday night headliners Future Islands, which drew the largest crowd of the night. They played some of their fan favorites like “A Dream of You and Me” and “A Song for our Grandfathers” as well as debuting a few new songs.