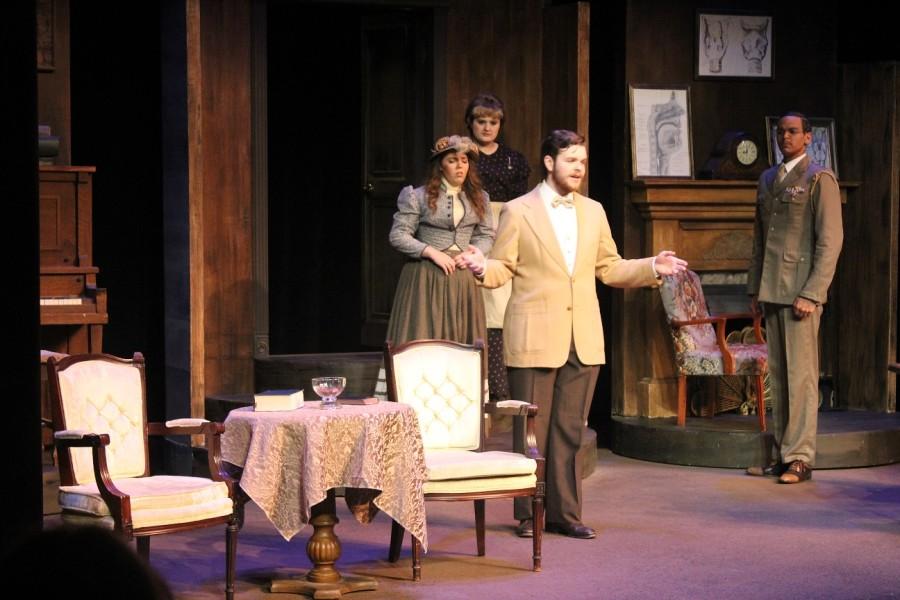 In this picture the characters are Eliza Doolittle played by Audrey Macneil, Henry Higgins played by Justin Woolums and Colonel Pickering played by Taylor Greatbatch. In this scene Higgins is telling Eliza she needs to get cleaned up.

The theatre is unlike any theatre or auditorium on campus.

The Henry Konstantinow Theater provides a home for student-produced pieces, allowing directors, producers, actors and designers to grow more as artists while providing a safe place for exploration.

The Henry began as Studio 307 in 2008 when Brian Robertson, faculty advisor for The Henry Theater, saw a need for a space where students could creatively express and freely explore their ideas.

At the time, students were creating projects on the side of the main productions.

“It’s like a lab for directors, a lab for scenic designers if they want to try out new ideas, lighting designers, stage management, sound designers,” Robertson said. “All of the students in all of those different walks of life, it’s their incubator where they can try things out.”

Tony Newton, student director for the show “Cherry Docs,” proposed the idea of the show to Robertson when he decided that he wanted to expand his artistic boundaries and try his hand at directing.

“This is me stepping out and branching out and doing more stuff outside of acting,” Robertson said. “I love acting, don’t get me wrong, but I wanted to do something that challenged me more as a theater artist as a whole.”

Along with being completely student run, the Henry Theater gives students a chance to put on shows that might not make it to the main stage.

Student artists have a broader spectrum of pieces to choose from, allowing them plenty of room for exploration. Boundaries can be pushed further than on the main stage, which allows more controversial material to be handled.

The first piece performed in the theatre was “Angels in America,” a play about the AIDS crisis in the 1980s.

‘“Angels in America” is a very powerful play that they chose to do to start it off,” Robertson said. “Students will propose the semester before, shows that they are interested in putting out. I don’t censor those choices, we just talk about the logistics.”

Newton loves the fact that The Henry allows for more experimental theater.

“Main stages do have to keep in mind, they do have to sell tickets and be a theater and with this [The Henry] it’s very much, let’s explore a concept and kind of create something to go along with it,” Newton said.

Meredith Russell, a senior BA theater arts major, is a producer and stage manager for The Henry Theater. She got involved her freshman year and has done three shows as a stage manager. She has also been a producer for four.

“It’s such a great time for, not just actors and directors, but also tech, the designers, and stage managers to really push the limits that we aren’t able to do on the main stages,” Russell said. “So we can handle a little more delicate material maybe or, you know, try something that’s really surreal or obscure that wouldn’t really sell tickets, but it still is theater and helps us grow as performers and technicians.”

Everything down to the audition process is run by students. The directors sit in on the main auditions, hold callbacks and put up cast lists in conjunction and coordinated with the main productions.

Several of the shows that The Henry produces are written by NKU playwriting students. Students have the opportunity to get academic credit for senior projects that will be produced in the theater.

“The Road Through Damascus,” written by NKU alumnus, Robert Macke, was produced with the help of The Henry in 2014. The piece is now being produced at a theater in Cincinnati, as well as a theater in Idaho.

“[Macke] got a little spring board, but he did it here first,” Robertson said.

The shows are free, but seats are limited. The theater holds about 30 audience members.

To RSVP for a show, a  call board for the studio series is available on the 2nd floor of the Fine Arts building.