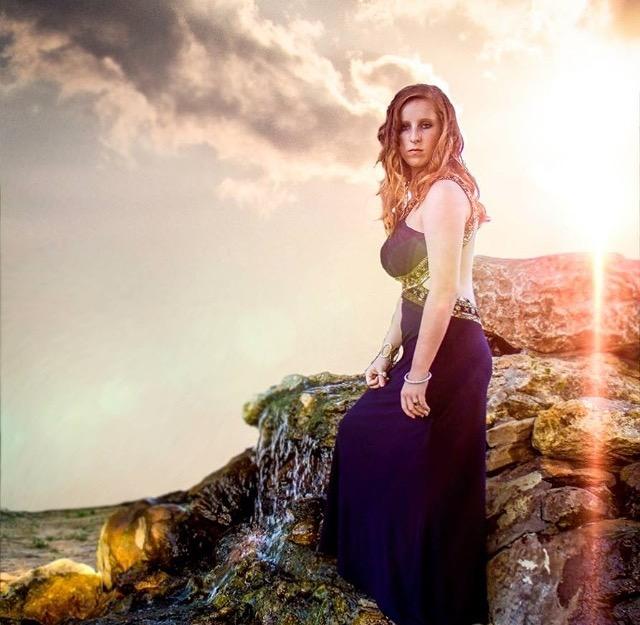 This is Berns cover photo for her mix tapes, which she prefers to hand out 'wherever and whenever' she can.

“I’m beginning to feel like a Rap God, Rap God. All my people from the front to the back nod, back nod. Now who thinks their arms are long enough to slap box, slap box? They said I rap like a robot, so call me Rapbot.”

The hip hop tune known as a ‘Rap God’ by Eminem might have been released in 2013 but it’s still Taylor Berns’ favorite song.

In fact, NKU might have its very own rap goddess, as Berns is warming up her voice and developing her future as a female rapper.

Berns, a freshman social work major, listens to Eminem frequently and he is her go-to rapper for inspiration.

“Eminem is a rap god,” Berns said. “He’s just so good. I was amazed after I heard ‘Rap God’ in high school. There were so many words and it was so fast.”

High school is where Berns’ talent and passion emerged. After playing the trumpet for seven years, she grew a fondness for performing solos and being in the spotlight. After discovering her hidden gift she enjoyed the rush of adrenaline that came with it.

“I love performing but I cannot sing at all,” Berns said. “One of my classmates were joking around and said well why don’t you try rapping. I didn’t really think about it that much and was like, ‘Oh, yeah maybe.’ Then I actually ended up trying it because a few of the kids in my class said that I have a deep voice for a girl. So after I tried it, it was so much fuch and I wanted to get better at it.”

Although Berns was fully prepared, her first time performing on her own did not go as she planned.

“A girl from my school was working on her senior spotlight, which was her moment to shine,” Berns said. “She asked if I wanted to collaborate with her and I was like yeah, definitely. We found a way for me to perform at school and I was completely off beat the entire time. It was so embarrassing and horrible because I’d never actually done it in front of anybody.”

Because of this nerve-wracking first routine, Berns’ following performances went smoothly and her fear of slipping up faded.

After moving to Northern Kentucky in June of 2015, Berns has performed at The Underground, a Christian-affiliated concert venue operated in the Greater Cincinnati area. Back in her hometown of Texas, she showcased her rapping at fundraisers, talent shows and festivals.

“Without social media I don’t think some artists would be as popular as they are now,” Lisa Stuart, sophomore creative writing major, said. “If an artist is going to gain some recognition they need to sell themselves and keep our attention. We’re always looking at new and trendy things, so I think that it’s important to involve yourself with the audience.”

Stuart thinks that an upcoming artist needs to take advantage of the networking and engagement tools that social media provides.

“SoundCloud is definitely my most listened to, and I hand out mix tapes wherever and whenever I can,” Berns said.  “I prefer to hand them out to people who I don’t know so I get their attention and spread the word. Recently I’ve handed them out at a Demi concert.”

Another role model for Berns is Demi Lovato because of her passionate songs and voice.

“When Demi performs you can tell she’s doing it for more than just celebrity status and that she loves music,” Berns said. “I think that’s more important than the fame aspect.”

While attending one of Demi Lovato’s concerts, Berns found her calling to develop her rapping talent even further.

“There was one moment when I was at a Demi concert and she was singing so amazing,” Berns said. “That was like my epiphany and when I knew I wanted to pursue a rapping career. Like I want to do this in front of thousands of people.”

Berns thinks that making it in the music industry is going to be a challenge, but she still hopes to get signed to a label and that someone happens to give her a chance.

Berns hopes that writing original songs from personal experience will make the necessary connection and enable her to stand out.

“It’s hard not to write about the same thing every time,” Berns said. “I mean, you can like expand on it, but your listeners will get tired of it. You have to try and mix it up. I primarily write about true experiences to a degree. When I get stuck I usually play around with word schemes, it’s not really ideas but more like what would make sense in somewhat clever way.”

Berns longs for a future that involves going to the recording studio every day.

“Everything looks so official in a recording studio,” Berns said. “The audio people are so good at mixing and mastering the beat. They make it sound so professional and I love the environment. Predicting my future, I see a lot of my time spent in a studio.”