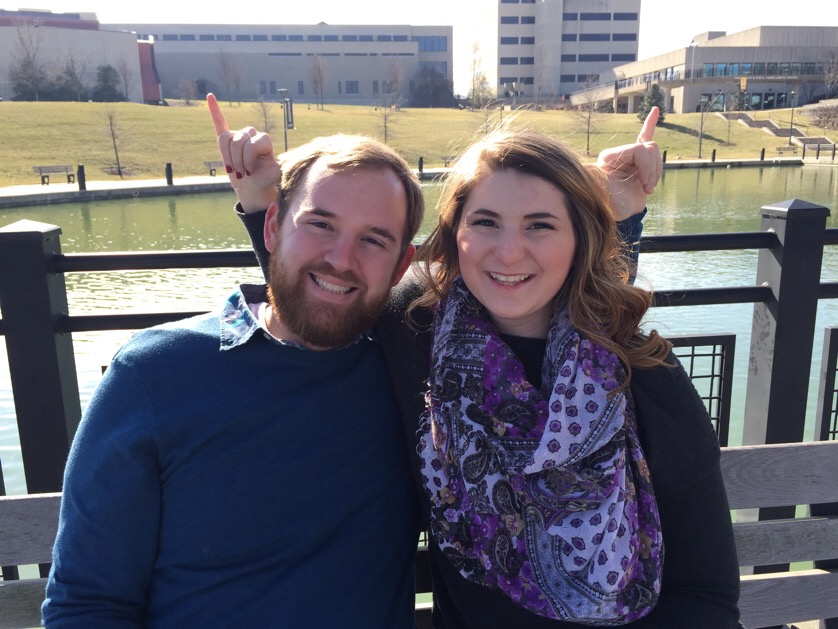 Danny Hagedorn and Nicole Hudson Norse Up by Loch Norse lake. The couple met here and plan to marry in September.

You may not have seen the fat baby flying around with heart shaped arrows, but you probably have seen the effects of that arrow hitting someone. Or maybe you’ve been struck by a love arrow yourself.

Regardless, love is in the air this week because of Valentine’s Day. Because of this, several students have come forward to talk about their own NKU love story.

Senior business administration major Tywan Shanklin found himself in an escape room in Virginia Beach. Everything was going according to plan until the safe box malfunctioned. Normally, this wouldn’t affect anything, but this time, the safe contained the ring he planned to use to ask the girl of his dreams to marry him.

As NKU alum Gabriela Santiago turned around, Shanklin grabbed the ring and was ready to ask her.

“Two years ago I told you I wanted to marry the next woman I dated and you took that in consideration and stuck it out with me. Gabriela Santiago, will you marry me?”

Before this day, Shanklin first noticed Santiago at NKU.

As he walked from his dorms freshman year, Shanklin saw her. At the time, he was seeing someone else, but Santiago always remained somewhere in the back of his mind.

After finding out they had mutual friends, they spent more time together. At the time, Shanklin was single in his sophomore year.

When he messaged her on Facebook, they would meet and get sushi. They eventually went on their first date to the Festival of Lights. That’s when he told her that he takes relationships seriously and expected to marry the next woman he dated.

On Oct. 10, Shanklin proposed to her.

Since Santiago is now in Virginia for graduate school, he planned to propose there in Virginia Beach’s Escape Room.

“Before we went and saw her, we dropped off the engagement ring at the escape room,” Shanklin said. “The theme was the inheritance room so the whole time you’ll be searching for the inheritance that your family left and try to open a safe.”

The safe is where Shanklin had the engagement ring placed.

“It (the safe) popped open by itself,” Shanklin said. “I grabbed the box with the engagement ring. When she turned around, I was on one knee and I proposed. And she loved it.”

Shanklin said that his relationship with Santiago can be described as a “completeness”. When they aren’t together, Shanklin said he doesn’t know what to do with himself.

“Her maturity level was equivalent to mine,” Shanklin said. “She motivates me.”

Shanklin and Santiago are getting married this summer.

“His personality was a bit too strong,” Hudson said. “Especially since I have a strong personality. Then we just kind of became friends.”

More than three years later and they are already planning their wedding.

Their friends had planned a trip to Newport on the Levee, but they all slept in and Hudson and Hagedorn went on their own together.

“It kind of became a first date,” Hudson said. “It was kind of an unconventional first date because we paid for ourselves because we didn’t think it was a date.”

Hagedorn noted that there were some awkward moments.

“The dude at Tom and Chee gave me a real nasty when I didn’t pay for her food,” Hagedorn said. “He looked at me and was like, ‘Okay, yeah’ and took her card and was giving me awkward looks the whole time.”

After that, they began going on real planned dates like a dinner and a movie.

Now, Hudson is a senior marketing and international studies major and Hagedorn is a NKU alum currently going for his masters in student affairs and higher education at Indiana State.

“I thought she was funny because the first thing I ever knew about her was she printed out a meme about studying in the honors lounge and taped it on the wall,” Hagedorn said.

Throughout their relationship, both of them thought it was great having someone on NKU’s campus to go to events together.

“It grew our NKU love,” Hudson said. “It’s not like one thing, it’s just being able to be together and have fun together.”

They also served as each other’s support system in college and they stressed the importance of that. However, now that Hagedorn is off at grad school, it has become a long-distance relationship.

“It’s a lot of work to make sure you’re calling the other person, you’re in contact,” Hudson said. “Sometimes you’re not even talking. You’re just on the phone to know the person’s there.”

The separation has allowed both of them to grow into themselves and become who they wanted to be.

Hagedorn will be moving back to Cincinnati in a few months and their wedding will take place Sept. 17, 2016.

Their reception will be at the American Sign Museum because they want it to feel fun and memorable.

“It was a good combination of the two of us,” Hagedorn said. “My focus and really what I bring up a lot in our day-to-day life of historical stuff… And her whole thing is marketing and advertising. It’s very much life us.”

“She pushes me,” Hagedorn said. “I really don’t know how else to say that. I’ve gotten more mature since being with her. She’s just beautiful too. She’s smart and I like having someone who can keep up with me.”

Hudson said that her favorite trait in Hagedorn is his passion.

“You know what he’s passionate about because when he talks, it comes out and his face lights up,” Hudson said. “I love that. I also love his drive. If he wants something, he’s gonna go for it.”

As far as weddings go, Hagedorn stressed that they are expensive.

For new couples, they both had some advice.

“Be yourself,” Hudson said. “You have to be who you are. We all have a little bit of weird in us that we don’t let most people see, but when you let it out for that significant other, I think that’s something beautiful to see. Be unapologetically who you are.”

Hagedorn said that patience is one of the main things to focus on.

“As time goes on, you’ll start to realize they are not this perfect person you thought they were in the honeymoon phase,” Hagedorn said. “Love and relationships is really just two people who care about each other enough to not give up on each other.”