Polar Plunge: Cold for a cause 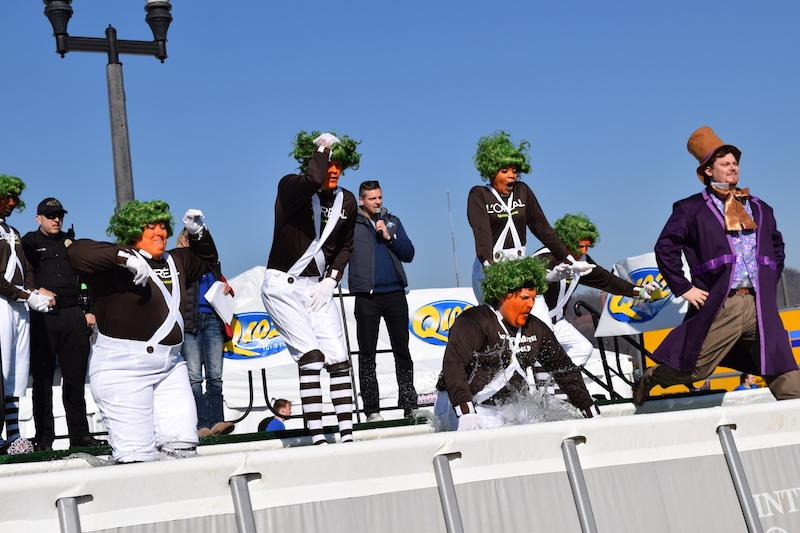 A group of oompa loompas from L’Oréal jumped in. The green hair and orange makeup, much to the announcer’s from Q 102 surprise, survived the water without smearing.

On Saturday Feb. 6, with the sun shining and the smell of bacon goetta pizza wafting in air, over 600 individuals braved the frigid temperatures for the annual Polar Plunge event.

Amidst a bustling crowd in the parking lot of Joe’s Crab Shack in Bellevue, Kentucky sat a four-foot-deep pool filled with 46 degree water, the warmest on record for the event that raises money for Special Olympics of Ohio and Kentucky.

This marked the 17th year for the charity event. Polar Plunge was originally held at Newport on the Levee, but moved to Joe’s Crab Shack after significant growth in which the levee venue was no longer large enough to cater to the event.

After the Special Olympics organizations of Kentucky and Ohio joined forces 11 years ago the event expanded from a 150 person event to as many as 900, according to Buerger.

For each team to take the chilly plunge a minimum donation of $75 was needed for the cause.

In totality, the event raised just under $112,000. Buerger hopes that in the future the event can draw in a quarter of million dollars for Special Olympics.

“That anyone does it, any year, amazes me,” Buerger said. “The fact that we’re from anywhere to 750 to 900 people here blows me away.”

Teams from all over the Greater Cincinnati area came out, including a team from L’Oréal who dressed as oompa loompas, donning grass green hair-dos and orange faces. The Young Marines, Cincinnati Roller Girls, Hamilton County Disability Services, University of Cincinnati School of Nursing, Special Olympic Athletes and Batavia High School were also part of the array of teams at Polar Plunge.

Phi Alpha Theta, according to senior history major Lauren Tucker, have been participating for more than five years.

“I forgot extra clothes, so I’m going to be really cold,” Tucker said. “But it’s OK! It’s for Special Olympics, which is a wonderful, wonderful organization and we’re proud to support it.”

Four members from Phi Alpha Theta, a co-ed history fraternity, jumped into the cold water for the cause, all while wearing shiny red capes that billowed in the breeze and Viking helmets.

“On one hand, I hate being cold, on the other it’s going to be fun and for a good cause,” Beal said.

After each group took their plunges, the once filled to the brim became significantly shallower. Water cascaded out of the pool and onto the crowd as the teams made a splash.

“It gives people an excuse to get out in a time of year where we’ve all felt trapped in our house for a long time,” Buerger said.

Over the years Polar Plunge has seen college teams from NKU, UC, Xavier and Thomas More participate. Buerger hopes the event can attract more participation and support from colleges in the Greater Cincinnati area.

“Having been in fraternity before I know where the growth potential on campus is,” Buerger said. “If you can really motivate those groups to come out then we’d love to see more college organizations [involved].”

There’s definitely room for college organizations to get involved in the future. The venue at Joe’s Crab Shack has room to pack in 100 more jumpers, according to Buerger. With the event being a household name across 35 states for the non-profit Special Olympics organization, Buerger looks to the future for continual growth.

“The ones that come back year after year are the people that realize it’s a Special Olympics event and that’s what is important to them,” Buerger said.