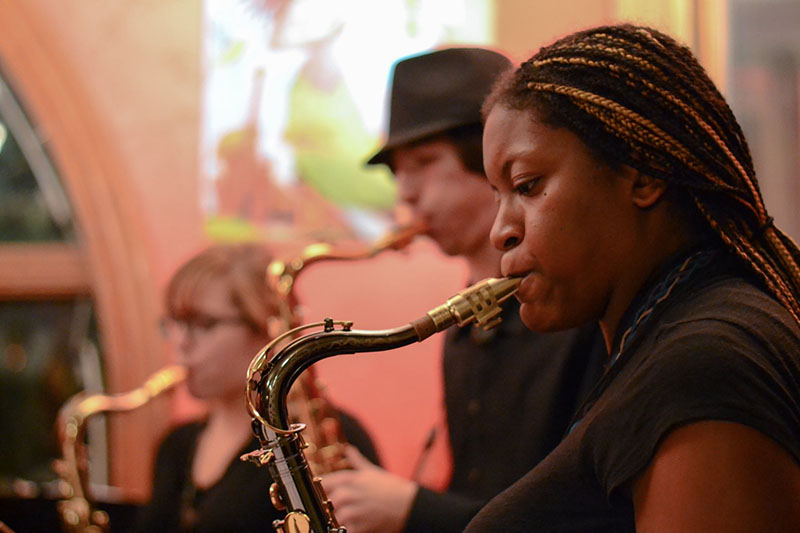 There is a dimly lit bar at the top of a wooden staircase on a Newport street corner. Every few weeks, a wide range of students and parents congregate to hear the live music of the NKU jazz students.

Jazz Combo 3, directed by Michael Meloy, is a jazz group of eight NKU music students who are taking part in the MUS 307 class. The NKU Jazz Studies program is playing a semester-long series at the York Street Cafe.

The combo consists of five freshman, two sophomores and one junior. In between songs, Meloy addressed the audience, discussing the short amount of time the band has had to work together.

“I’m impressed and you should be too,” Meloy said.

The performance began with “Autumn Leaves” by Joseph Kosma. Live performances of jazz songs typically consist of the band playing a short melody, or “head”, before individual musicians take turns playing extended solos. The song usually ends with a repeat of the head.

Other standout tunes from the show included the bass-driven “Favela” by Antonio Jobim and the closing funk jam “The Chicken” by Pee Wee Ellis and Jaco Pastorius.

Professor William Brian “Boss” Hogg, head of the jazz studies program, began the York Street shows in 2012. At the time, students performed on campus, where the auditoriums were not suited for jazz concerts. He wanted students both performing and attending to experience a better connection that comes from more intimate venues.

“There was a disconnect between the audience and the musicians,” Hogg said.

A.J. Pearson, a fifth year senior with a jazz studies major, believes the informal setting is great for everyone involved.

“To be able to come around, order a drink, order some food, and be able to hoot and holler all they want…It’s a lot more musical and a lot less academic,” Pearson said.

The concerts are also meant to prepare music students for professional gigs later in their careers.

“Doing the concerts [at York Street Cafe] instead of a concert hall or whatnot gives you a more real, y’know, realistic environment of what it’s gonna be like when you’re out gigging,” Pearson said.

According to professor Hogg, any profit goes directly back into the jazz studies program.

“We weren’t really well supported back then…it was a new program. I wanted to be a little more entrepreneurial,” Hogg said.

The York Street Cafe, located at 738 York Street, has been owned and operated by Terry and Betsy Cunningham since 1997. Terry Cunningham was approached by Professor Hogg in 2012 to host performances on Tuesdays and Thursdays.

“Then [Hogg] started bringing the alumni in and the faculty and the students and I fell in love with what their efforts were,” Cunningham said.

Since the start of the York Street shows, Cunningham has been impressed with the professionalism of NKU students who perform in his restaurant.

“The students that they’re bringing in here are the, not only talented musicians, they’re the politest kids I’ve ever met in my life…They’re learning more than music [at NKU], they’re learning to be a men and women,” Cunningham said.

Various NKU jazz groups are scheduled to perform at the York Street Cafe throughout the remainder of the fall 2015 semester, as well as spring 2016. The next performance will be the Big Band Christmas show on Thursday, Dec. 3.