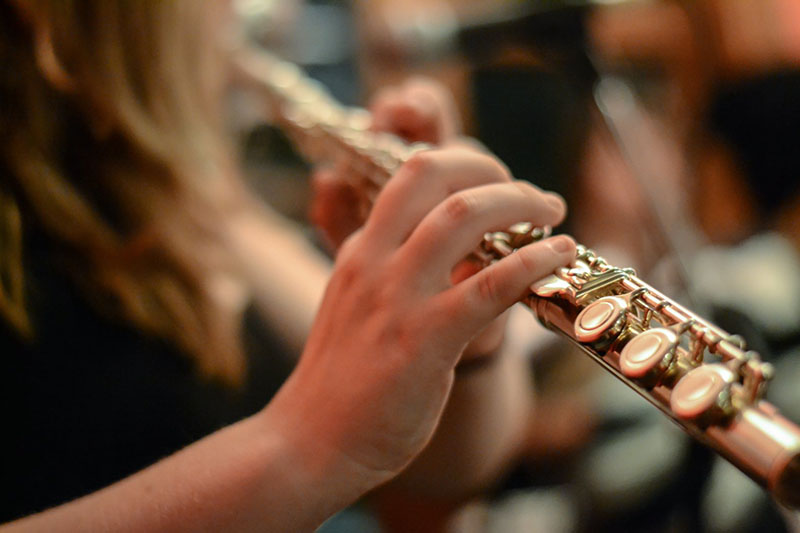 Professor Hogg teaches at NKU. He leads a double life as musician.

One night in Marrakesh, Morocco, Professor William Brian “Boss” Hogg, the director of jazz studies at NKU,was interrupted in the middle of a gig at a club to play with the king.

He thought he had been summoned to play for the king of Morocco, Mohammed VI. In reality, he had been sent for by someone arguably more important, Mahmoud Guinia.

Mahmoud Guinia was considered a Maâllem, or master, of Gnawa music. There are currently only 25 Maâllems in the world. Amongst the other Maâllems, Guinia was known as “the king.”

Gnawa music is used in rituals that can last for hours. It is native to northern Africa and is based in poetry that, according to Hogg, has been passed down verbally since before the 14th century.

While Hogg was playing his club gig, the owner of the bar received a call from Guinia’s handler asking for him.

“So the owner of the restaurant comes down and says, ‘You gotta go right now to this place. The king has requested you,’” said Hogg.

Hogg has immense respect for King Mohammed VI, comparing him to former US President Abraham Lincoln. He was extremely nervous to meet him. When he realized who had actually summoned him, he did not relax at all.

“As far as music is concerned, the equivalent would be, ‘Yeah, Mozart is requesting that you come play with him right now.’…I’m literally shaking, nervous about playing for the king,” Hogg said.

“I was playing 40 gigs a month…I had two maids, I had six girlfriends,” Hogg said.

An evening often consisted of a few two-hour sets at the club where he was regularly paid and fed. He would follow that up with a rock gig and occasionally play at late-night dance clubs.

He once played an eight-hour gig at an equestrian event in Rabat for a brother of the actual king. During the opening ceremony Hogg walked through the crowd playing the jazz standard “Misty.”

Hogg’s career has led him to work with many popular American artists as well. He has played with a wide range of musicians in the studio or on the stage like Bootsy Collins, Josh Groban and the Temptations. That being said, he prefers live shows to studio and orchestra work.

“I’ve got the stuff on my resume…[but] I don’t really get off on that,” Hogg said.

Hogg said he is not the type of musician to enjoy sterile work. This carries over into his teaching and interactions with faculty.

“You have professors that fit the stereotype, very correct…very professional and responsible and I would probably be the opposite,” Hogg said.

Professor Hogg did not envision himself as a teacher right now.

However, he is not exclusively a professor and is still very much a professional musician, sometimes bringing students along to gigs as colleagues.

A.J. Pearson, a fifth year senior and jazz studies major, doesn’t notice much difference between Hogg the teacher and Hogg the bandmate.

“He gives great advice on how to do things and what to practice and how you should improve yourself, but make sure that you practice,” Upthegrove said. “He wants to see you succeed, so if you don’t practice, it’s not a good time. Make sure you have your stuff together.”

Hogg also teaches outside of NKU. He works with Laura Gentry, president of Jazz Alive, organizing the EMPOWER program to teach jazz and it’s history to middle and high school students who otherwise wouldn’t have the option to learn about it.

He began the program after a very talented 12-year-old student of his said that she wasn’t interested in music and wanted to pursue a career as a dancer in rap videos.

After beginning at Oyler School, the program spread to Campbell Lodge Boys’ Home, then on to Dayton and Holmes high schools. There are currently four students at NKU who participated in the EMPOWER program.

A combination of hard living, frequent gigs and teaching 33 hours instead of the standard 18 led to Hogg suffering a heart attack in 2014. He was 41 years old.

“Let’s just say over the course of my life I haven’t made the best choices, health wise,” Hogg said.

On the evening of Oct. 6, 2014, Hogg began feeling bad, like his back needed to be popped, and headed home from a rehearsal.

“So I drank a little moonshine when I got home and I was laying in bed,” Hogg said. “I couldn’t get comfortable laying down so I sat up and started to get a pain under my arm.”

He began researching his symptoms online, all of which pointed to a heart attack. When a red rash appeared across his face and chest, the online consensus changed to spider bite.

Hogg drove himself to the Edgewood branch of the St. Elizabeth hospital after midnight. Along the way, his left arm went numb. He considered pulling over and calling an ambulance, but realized he wouldn’t be able to tell them where he was.

“I remember sitting at a red light thinking, ‘Man, this red light sure is long. I’m gonna run it, cause I don’t really feel good at all’,” Hogg said.

After taking an E.K.G. staff began running in and out of his room. Hogg was cracking jokes and laughing throughout the procedure.

He was diagnosed with a type of heart attack called the widowmaker where the left anterior descending artery is blocked. The widowmaker has a 10 to 15 percent survival rate.

“If I’d fallen asleep that night instead of going to the hospital, I’d be dead without a question,” Hogg said.

Before he went under, a nurse suggested he call his loved ones to say goodbye. He called his girlfriend and his parents.

“I said, ‘Look, I’m not afraid…I’m not scared.’,” Hogg said. “‘They’re gonna take me in and see if they can save my life’…I grew up Christian so we’re kind of ready for that any time. I had a great life…I’d done more in my life than people could do in two.”

Hogg is still in therapy and says he has not psychologically recovered. He has quit smoking and also significantly decreased his workload.

Hogg was playing saxophone a week after leaving the hospital. He only missed two days of work.

“That wasn’t because of the administration, it’s because of you guys,” Hogg said. “You guys pay a lot of money. You deserve to have somebody here, giving you what you’re paying for.”