More than turkey this Thanksgiving 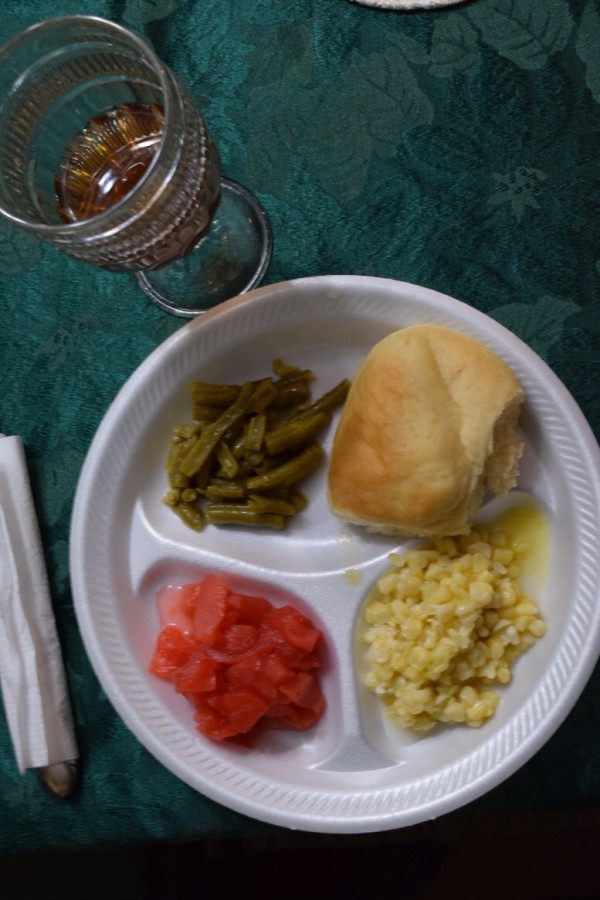 A typical vegetarian Thanksgiving consists of sides, such as green beans, corn, and rolls. As time goes by, vegetarians may branch out to alternatives to meat, such as Tofurky, like Ashley Gritton.

The weather has cooled and the leaves have fallen, and that means one thing for sure, it’s time for Thanksgiving.

A holiday overly associated with turkeys cooked in a variety of ways, Vegetarian Times, 7.3 million people in the U.S are vegetarian, meaning that 3.2 percent of the population will be be celebrating the day without turkey.

According to senior journalism major Lundon White, vegetarians have to go through a learning curve of figuring out what they can eat on Thanksgiving, as well as educating their families on their dietary choices.

For White, becoming a vegetarian started with a bet with her cousin. Her cousin gave up three days later, four and a half years later, and White is still going.

At first, White said navigating holidays like Thanksgiving proved to be difficult in a family that loved meat.

“My first thanksgiving was really hard, but I knew that if I could get through my first Thanksgiving that I’d be okay,” White recalled.

White said that it came down to learning how to navigate her family’s cooking adding that her family is accommodating to her dietary restrictions and have even gone as far as trying meatless dishes for themselves.

The drastic change to her diet influenced White’s sister to become a pescatarian, which is a subcategory of vegetarianism in which a person refrains from eating meat except for fish. White’s mother has cut back on meat intake as well.

White hopes to be more strategic in educating her family on what she can eat, especially during holiday dinners. White believes that there are a lot of misconceptions surrounded around the food that vegetarians consume.

This year, White is going to have a tofu teriyaki dish and hopes her family will be willing to try it too.

Tofu holds a common spot on a vegetarian’s’ food palates. It is a form of soy that is pressed into soft blocks. It is rich in both protein and calcium.

Ashley Gritton, a junior psychology major, has had a similar experience with being a vegetarian.

She has been a vegetarian for two years and, like White, has had to work to educate her family on both her beliefs and what she can eat.

“Everyone is always thinking I’m lacking and I’m not,” Gritton said. “At first it was hard, and now I’m good. I don’t even miss meat.”

Gritton’s family now accommodates her eating habits and will make separate side dishes just for her. Gritton recalled that her mother made one batch of stuffing without meat and another with meat to make sure that she wouldn’t miss out on the holiday just because of her dietary choices.

“[My family] is still always like, ‘Let’s go to Chick-fil-A and eat chicken’ and I’m like, ‘No!’ but they understand where I’m coming from now,” Gritton said.

Tofurky is the brand name of a meatless turkey replacement. It consists of a mixture of wheat protein and organic tofu. It’s also stuffed with rice, mushrooms and various herbs. Tofurky is also vegan, a type of vegetarianism that excludes any type of meat and dairy products.

For the first year of being a vegetarian, Gritton’s diet consisted of pasta dish after pasta dish and she had never branched out into trying tofu.

Now, having been a vegetarian for around 3 years, she has found that she loves tofu despite the common belief that tofu is plastic and unappetizing.

Dusty Lane, a sophomore double major in philosophy and computer science, sticks to the sides on Thanksgiving and other holiday meals.

Lane claims that his grandmother is a fantastic cook, and despite not eating the meat portions of her meals, he never feels like he is missing out.

Like Gritton and White, Lane found that over time his family has become more accommodating to his dietary choices as they began to understand what he could eat.

But at first, Lane himself wasn’t sure what to expect during holiday meals.

“It was rocky at first,” Lane said. “[My family] didn’t understand why I was doing it. They came to terms with it.”

During holidays, such as Thanksgiving, food and family are major components. Vegetarians have to figure out how to navigate holiday meals for an equally satisfying time.

For White, Gritton and Lane this came with patience and educating their respective families on their dietary choices.