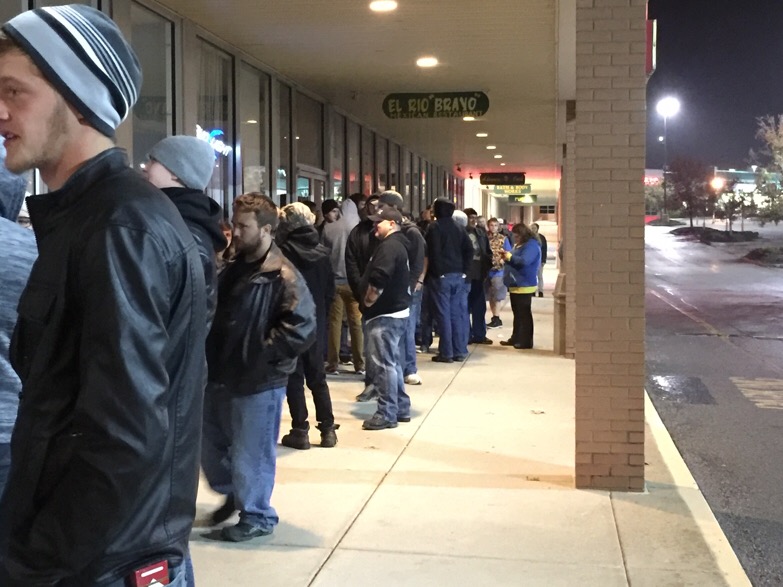 Gamers brave the cold outside for the release of Fallout 4. This is a common theme with big name games.

Fallout 4 isn’t an average video game release. It’s one of the biggest role-playing franchise in gaming, having shipped over 12 million copies on its first day of release.

From developer Bethesda, makers of equally massive games like The Elder Scrolls V: Skyrim, Fallout 4 is their latest open-world role-playing game, and shows no signs of slowing down.

Exploration has always been the focal point of many of Bethesda’s titles. Set 200 years after a fictitious Cold War between America and China reached nuclear proportions, Fallout 4 gives players a chance to see these atrocious, yet fantastical settings without having to face the harsh realities of a post-apocalypse.

“I had friends that had Fallout 3 and Fallout: New Vegas that I’ve gone through, but this is the first one I’ve owned,” statistics major Ryan Weigand said.

Weigand and hundreds more lined up at the Alexandria, Ky. GameStop just before midnight, braving the evening cold to get their hands on Fallout 4 as soon as possible.

Offering Fallout-themed raffles and promotions, GameStop manager Jerome Kunkel said they are accustomed to popular titles getting these massive releases.

“I think the hype on Fallout 4 was through the roof,” Kunkel said. “Since they gave a solid date at E3 back in June, it’s all we’ve heard.”

There’s a special kind of excitement that stems from Bethesda’s games, and it’s not just because of the hype many games receive.

“Fallout 4 [provides] an opportunity to explore the post-apocalypse in a big way,” communications professor Lex Pulos said. “It brings a type of human exploration – that yearn to experience a big environment, to shape your destiny in ways you want to.”

“Narratives are exciting,” Pulos said. We’ve sat around fires, theaters, televisions, spinning narratives.They allow us to ask what if questions that we don’t get posed in our daily lives, and lets us be better people than we are, through prospects and through failure.”

Fallout has had a celebrated history, though for many players, this sort of exploration was kicked off by 2008’s Fallout 3. With both Xbox Ones and PlayStation 4s selling millions of units, these launch events aren’t going anywhere.

“I started with 3 like everyone else, and I still like it a lot,” Tanner Coleman, CIT major, said. “I go to a couple of these pre-release things a year, but I try to keep myself limited to not having a lot of info [on the game].”

Pulos also suggested that the post-apocalyptic, science fiction angle Fallout strives for may have something to do with its massive appeal.

“Fallout calls to our cultural anxiety of this tumultuous chaos that the post-apocalypse looks at, but we get to explore and have fun in that,” Pulos said.

There’s a cathartic release felt within the confines of Bethesda’s gargantuan worlds, and palpable excitement could be felt as hundreds of smiling faces could be seen exiting the Alexandria GameStop, ready to conquer the wasteland.