A look at ‘Circle, Mirror, Transformation’ 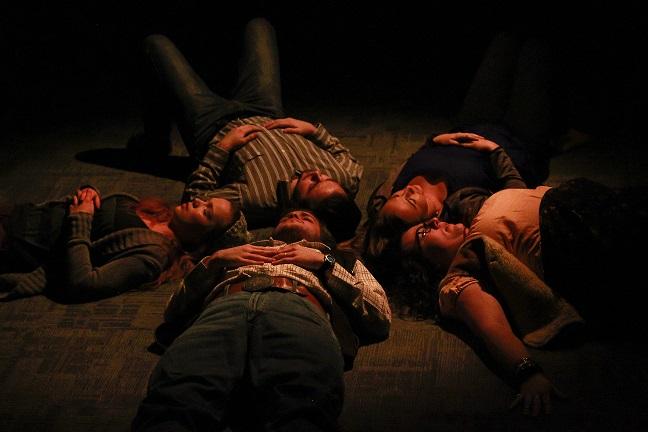 The opening scene of "Circle, Mirror, Transformation". The show is student run and produced.

A small classroom on the first floor of the Fine Arts building is now home to the student-run Studio Series, previously nicknamed the 307 Series.

The production is a mix of real-life emotion, an acting class and the human condition.

Directed by senior Erin Reynolds, “Circle Mirror Transformation” opened with low light and five people lying in a circle on the floor who were trying to count to ten. The scene was low key and captivating.

“It’s a story of empathy and kindness; a story of the awful and great things people do to each other and their relationships,” Madison Pullins who plays Lauren, a withdrawn teen student.

There is the teacher Marty, played by Kate Stuard, a loving hippie who teaches more expression than acting through her therapeutic exercises. Marty’s husband James, played by Justin Woolums, is also taking the class.

Lauren played by Madison Pullins, is 16 and hoping to star in her high school fall production. Teresa played by Emily Fry is a 35-year-old beautiful, former New York actress and is now massage therapist.

Schultz, played by Dan Robertson, is 48, recently divorced and self-conscious about himself.

“You learn about all of the five characters through the acting exercises that they do and the breaks they take,” Reynolds said.

The scenes unfold with small displays from the six-week classes. Week one includes introductions, awkward pauses and silly bonding moments. Every week, characters act out inanimate objects, parents, ex-boyfriends and each other.

The audience laughed at the positions the actors found themselves in during the 115 minute show.

“It was impressive how they maintained character throughout the laughing,” Joey Smith, audience member and political science senior said. “Erin is an amazing director, so professional with real acting.”

There was no intermission for the audience to take a break or for the actors to recollect themselves.

Kate Stuard emerged as a crowd favorite with her physical expression and humor for Smith.

Stuard’s dramatic facial expressions and genius with the therapy ball were hilarious.

Reynolds said she recommends the show to anyone teenage and up. The show is free, but some may be left standing due limited seating in the theatre.

“No one will be turned away, everyone is welcome, they just might be in standing room,” Reynolds said.

Stuard said she is excited to work with Reynolds who has an “impeccable eye for the intent of the characters” and allows her actors to make bold choices exploring the characters.

The show reveals deep emotion as the characters share about their pasts, secrets and feelings. Friendships are established and lost in this rollercoaster acting class known as “Circle Mirror Transformation”.

“I feel the theme, I find, is how the human condition affects relationships in the real world and how those consequences affect others,” Stuard said.

The enjoyment for the crowd was universal, but each participant took away something different.

“There are lots of fun and different themes,” Reynolds said. “The main theme is from the title. It’s transformation. Each of the five players goes through a major transformation during their life.”

Others found more entertainment value in the production.

“The entire show was really interesting and hilarious,” Smith said. “Even though I may not understand the concept.”

The play runs through the weekend, with two more shows Friday and Saturday at 8 p.m.

The opportunity of a full production completely produced by students, gives the students the opportunity to get real experience Reynolds said.

This play stands alone simply for it’s length, as most student produced plays aren’t usually as long, according to Reynolds. This is a rare opportunity to see a full length play completely produced by students.

Whether the audience was looking for a few hours of entertainment or a therapy session on the human condition, they found it in Reynolds’ production of “Circle Mirror Transformation”.