VIDEO: Nonprofit uses art to give back 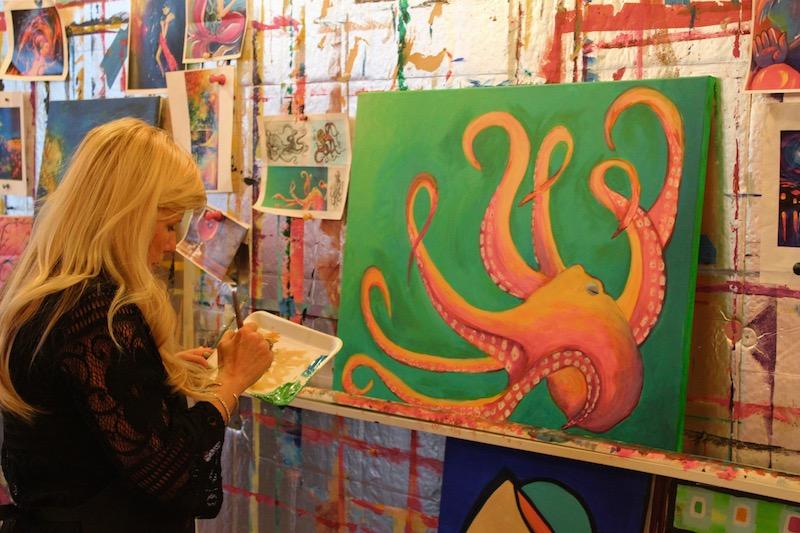 Eloise Lee touches up a painting that was worked on in a previous class.

In the winter of 2012, Lou Denning asked Mari Knight what she wanted for Christmas. After careful thought, Knight responded by saying “what do I need?” It was that answer that led the pair to give what they would have spent on each other to their friends in need.

Now, three years later, they are running a nonprofit that allows them to give back all the time.

Purposeful Painting is a nonprofit organization that aims to help “the working woman” whenever she encounters unexpected expenses.

“To date, we have given away over $25,000 to the working woman,” Knight said. “The woman who makes too much money to qualify for assistance, yet if she encounters an unexpected expense… it could be devastating to her budget.”

Funding this project is where the painting side of things comes in.

Purposeful Painting has developed a process called Co-Creating Artworks to raise money for their cause. They bring together artists of all skill levels and let them paint together on everyone’s different canvases. Afterwards, they auction off or sell the pieces they’ve created.

“An artist will come in and find an inspiration that speaks to them or they will bring one with them,” Knight said. “They’ll start on their own painting for 15 to 20 minutes and then they have to detach. They have to leave their painting and move to the next person’s.”

Jessica Holtman, NKU student and studio arts major, is involved with the nonprofit. She met Knight, who is also a real estate agent, when she was looking for a house. When Knight discovered Holtman was an artist she encouraged her to come to one of the classes.

“It gives you such a wonderful sense of community when the project is finally done and you’re able to pick out the small parts we all did to create such a beautiful whole,” Holtman said.

Carole Cangioni, assistant professor of management at NKU, has been involved with the nonprofit as well. After being introduced to the co-creation classes through a friend, she decided to incorporate Purposeful Painting into the social entrepreneurship class she was teaching.

“They were in the process of starting the nonprofit when I met them and little by little they needed more information,” Cangioni said. “I started teaching social entrepreneurship and I figured that it would be a good idea for [Purposeful Painting] to be one the projects that the students would work on.”

The class gave them advice on finding grants, building their website, establishing a social media presence, creating fundraisers and more. All of the advice has helped them to continue to grow as an organization.

And as the organization continues to grow they are able to give back more and more.

“Everybody knows somebody that’s in that spot where they don’t have the money for something,” Denning said. “We’ll give someone $300 – $500 which doesn’t seem like a lot of money unless you don’t have it. Then it might as well be a million.”

Many of the frequent painters find the process and organization to be very inspirational.

“I live like 45 minutes away, but I’ll come all the way down here to paint and get inspired,” said Eloise Lee, a friend and frequent Purposeful Painting painter. “And I like the fact that I’m actually a part of a charity. It makes you feel good.”

If you are interesting in attending a Co-Creation Artworks class or would like to buy a painting you can visit www.purposefulpainting.org for more information.