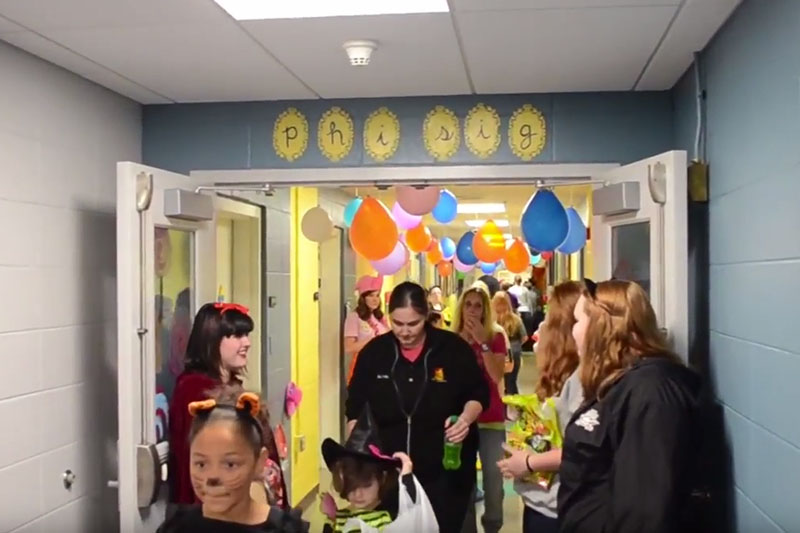 Children from all over the surrounding area swarmed to Callahan Hall to go trick or treating Wednesday, Oct. 28. The theme for this year is Candy Land.

Norse-O-Ween is an event that brings the community and NKU together and allows the children to trick or treat in a safe environment and out of the weather. It is an event that has been annual for over a decade.

Mike Irvin, Callahan Hall Director for the past four years stated that while it’s good to connect NKU to the community, it’s really all about the kids and making sure they have a safe, fun time.

“It’s really about community engagement, so getting NKU more connected with the surrounding community. It’s great to get new people on campus, but really it’s all about connecting NKU with the community,” Irvin said. “With NKU, we’re less than 50 years old, so we’re trying to get people familiar with campus and get them to see some faces that they don’t regularly see. As our committee would say, it’s about the kids, it’s for the children.”

Irvin was also adamant about safety for the kids at Callahan.

“We’re very particular about safety which is why we have the senior center next door letting us use their parking, so the parents and kids are away from student parking and student driving, and we have university police sending at least an officer or two to help direct traffic. Our number one priority is safety,” Irvin said.

Their second priority though is fun. Each hallway is a different theme from the board game, and in each solarium, the multipurpose room, the J wing classroom and the honors lounge there will be an individual activity for the children to participate in. Resident Assistants and Greek life organizations came up with activities for the children to participate on their way out of the wing.

Brittany Smallwood, RA for the F and G wing, has an activity of her own for the kids that she remembers doing at this same event when she was a kid.

“I’m doing this event called Squish Squash. Basically there are buckets that are covered and they are going to have food items inside, but the kids aren’t going to know,” Smallwood said. “The kids are going to be told to describe what’s inside, and all the while it’s going to be hinted at other things, I have spaghetti that are suppose to feel like intestines, and its suppose to be really fun and cool. That’s actually the activity I remember doing from when I was younger.”

Norse-O-Ween even went a little further and had women dressed up as Elsa and Anna who said goodbye to the little girls as they walked out the door in their Frozen costumes.

Reid Kline, RA for the D wing, said that there was no small amount of fun that evening; he saw a lot of funny costumes throughout the night that made a lot of children smile.

“There was someone that was walking around with a giant print out of a baby head, and that was probably my favorite, you  couldn’t even tell how they could see out of it but she would move around perfectly fine,” Kline said.

Norse O Ween was a success that night, but it took a lot of time and effort to make it go smoothly. Kline also stated that the committee had to go through a lot of preparation for this event.

The committee gets together and starts planning for the event in the beginning of the semester and they usually get inquiries from parents and schools wanting to know when they’ll send out more information about the event.

“We get contacted from parents or schools in the beginning of the semester asking when we’re going to send out information,” Irvin said. “We develop committees with the staff based on interest, and we’ll meet in the very beginning of the semester, we started meeting back in late August for this. We settled on Candy Land pretty quickly because it’s kid friendly, its colorful, there’s pieces as candy as decoration so what’s not to love, and we’re always looking for feedback.”

Each year they start sending out information to community elementary and middle schools. Through flyers or emails, or sometimes even by Facebook, the community can always find out what’s going on.

“We drop off flyers to schools really from the tip of Kentucky all the way down to Alexandria, and within 45 minutes south as well,” Irvin said.

Even the students in the residence halls can’t get away from it. From their RA’s sending out emails, to word of mouth and flyers, the news is everywhere.

“Word of mouth is huge and just telling anyone that passes by,” Smallwood said. “I also have flyers that are up throughout the building, and I also have full email with all my residents on it so I emailed all of them and then let them know ‘this is what we’re doing, this is what Norse-O-Ween is’ and I also have friends who live in other buildings that have talked to people about it too.”

Kline believes that Norse-O-Ween is a great way to get children involved with NKU and they get to have fun while doing it. Each hallway gets its own theme and Kline choose to have a bag decorating area in the D wing solarium for kids who might run out of room for their candy, or forgot to bring a bag.

“Norse-O-Ween is a Halloween initiative to bring children from surrounding schools, and they basically trick or treat around Callahan hall,” Kline said. There are different programs that the sororities can put on or some different RA’s that they can come to, I’m doing a bag decorating competition, so that they can have bags to go around and collect candy in case they didn’t have bag or in case they just ran out of room for candy.”

Out of the 450 students that live at Callahan, around 150 students signed up to help out. One of the best things of helping out with an event like this is all the smiling faces that pass by, according to Kline.

“The kids are so cute and they get to go around asking for candy and then you get to tell them how cute they are so that’s probably my favorite part, and just seeing them be really happy and want to take part of the program is really rewarding,” Kline said.

Over 200 children showed up last year for Norse-O-Ween event. Kline feels that these types of events are important for the community and the school to work together.

“These types of events are really important on getting NKU’s name out there, especially with children who could somehow end up back here and that means they’ll know that a lot of opportunities are at NKU,” Kline said.

Irvin said that this event is one of the biggest community outreach programs that housing hosts, and while it’s good that they get back such positive feedback from the community, it’s really for the kids.

“The university is always looking to grow and being in an area that has potential for a lot of community involvement, from a housing perspective this is housing’s biggest community outreach program,” Irvin said. “It’s something we’ve maintained for almost a decade now, we always draw a good crowd, people are asking about it ahead of time, so I think it projects a positive image but really it’s for the kids. It’s fun, it’s safe, and it’s a great way to spend an evening as a great alternative to Halloween.”