Writers become a tool for change for NKU students 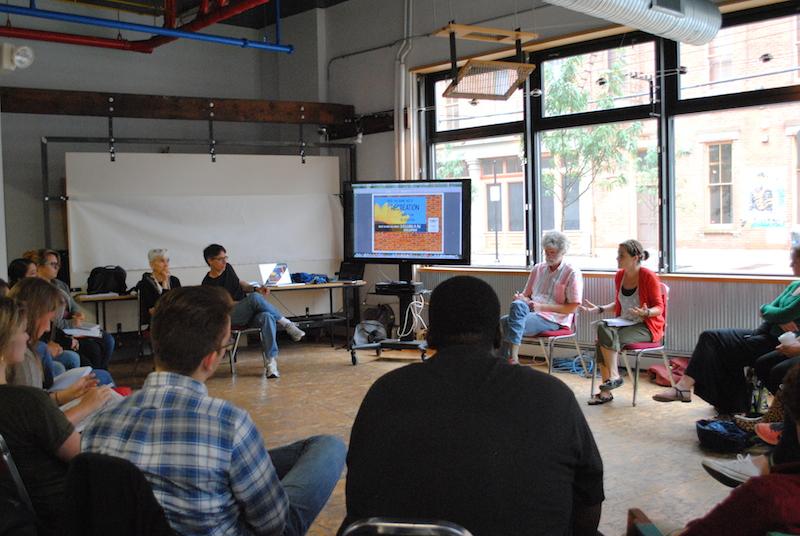 Both Miami and NKU students, along with guest speakers that are activists in the OTR community take part in the class. The class meets in Buddy's Place.

Nestled on Vine Street in Over-the-Rhine, Cincinnati cars line the streets, businesses bring color to storefronts and a diverse array of people bustle about. At the heart of it all is Buddy’s Place, a light blue building named after homeless advocate Buddy Gray. Not only does this building provide shelter for the homeless, but it also serves as a classroom to NKU and Miami University students.

It only makes sense that a class entitled Writing for Social Change would meet in a building and a neighborhood where activists, advocates and residents are calling for that very change.

Even though many of the students didn’t have prior experience with the OTR community, having the location off-campus and in Buddy’s Place has allowed students to explore the neighborhood in-depth as well as directly interact with the residents in the community they want to bring a positive change to, according to NKU student Marla Mackey.

“If this course were not off-campus, I don’t believe I would feel nearly as impassioned about the specific issues we are dealing with,” Mackey said.

The class also is collaborative with a group of Miami University students that stay in the neighborhood over the course of the semester. Dr. Chris Wilkey partnered with architect professor Tom Dutton and social work scholar and practitioner Alice Skirts to create and teach this course.

“The idea is to introduce students to the neighborhood and for them to start developing projects midway through the semester that are basically designed to intervene in aspects of the neighborhood,” Wilkey said.

The issues the students generally focus on, according to Wilkey, are the homelessness and ensuring more affordable housing in the Over-the-Rhine area. OTR is a community that has been undergoing revitalization that has caused property values to increase. This causes poorer residents, some with families that have been in the neighborhood for generations, to be displaced. This is known as gentrification.

Jessica Willis, a NKU student enrolled in the class, acknowledged that one of her friends was even worried when she said that she had a class in OTR because of its reputation as a crime-ridden area.

“This class showed me that yes, crime and homelessness is a problem in OTR, but there is a lot more involved in the community,” Willis said.

Through the class, Willis was exposed to activist and community organizations like the Peaslee Center, the Drop Inn Center and more. These organizations work to make OTR a better place for its residents.

“OTR is not a crime-ridden part of Cincinnati,” Willis said. “Generalizing it as such shows other people’s lack of understanding and unwillingness to see past what they want to.”

Willis had never had interactions with the homeless until she took this class. The class opened her eyes to how many odds are truly stacked against the homeless and why it is so essential to give a voice to the otherwise marginalized.

“The organizations that we’ve been working with are really committed to advocating on behalf of the people that are at risk from the development that is going on in the neighborhood,” Wilkey said.

Writing, in particular, gives students an opportunity to have their work read outside of the classroom setting. According to Wilkey, the class gives them a practical setting where the students can see the action of the work and the impact it has. There is a real audience for them to work with.

“They’re able to see that there is a strong connection between the writing they do for school and the writing that actually goes on in the real world,” Wilkey said.

He added that writing is essentially becomes a tool for social change. The students in this class learn how to hone this tool to bring about social change.

“Writing becomes a way to get the message out about what is possible and what is going on,” Wilkey said. “Writing is an integral part of social change.”

Through the class Mackey now wants to become a regular volunteer at the Peaslee center and an advocate for the community. Willis wants to help give homeless people in the area a voice and extinguish the misconceptions surrounding the homeless.

“My vision is still broadening, but everything that I have learned thus far, has only made me feel closer to my city and neighbors,” Mackey said.

Wilkey has been teaching the class for five years thus far. There is still work to be done in the neighborhood. Writing provides the power to educate those on the issues at hand and the change that must be done to alleviate the problems.

“It’s a way of communicating perceptions and point of views and that’s the only way change can happen,” Wilkey said. “Change can only happen if people are convinced that change can happen and there’s a need for change.”