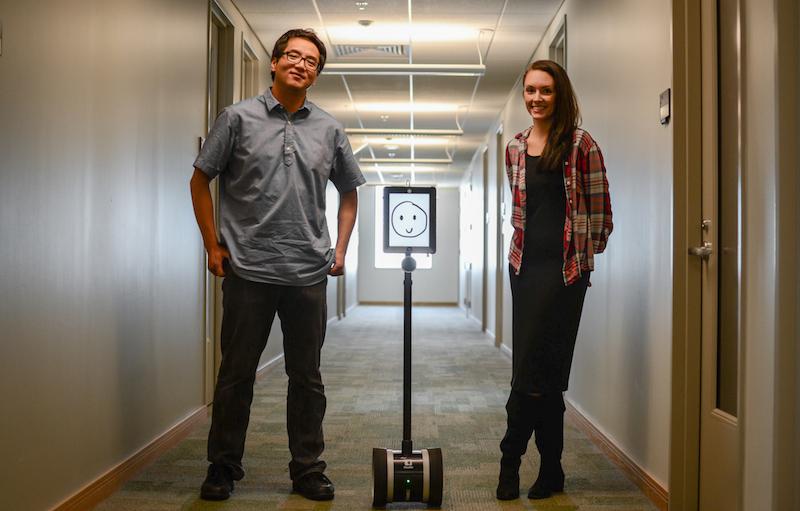 Between the studies on digital media production and computer sciences, Griffin Hall is home to some impressive technology. You might start seeing a new, digital face wandering the halls of the College of Informatics.

That digital face is known as Pineapple, and it will be used for the next three years for research into social robotics.

Graduate students Anne Thompson and Andrew Boehmker, along with Dr. Austin Lee, are studying how people interact with artificial intelligence.

“The research is based off the interactions between artificial life and humans so we’re looking at how they affect each other,” Thompson said.

While this may sound like Science Fiction to some, it is actually an emerging area of study that involves Communications and Robotics.

“I see robots as this very mechanical thing, but there’s this whole field of social robotics and it looks at how we interact with robots,” Boehmker said. “It looks at if we can truly interact with them as humans or are we always going to view them as lesser. We’re looking at those kinds of pheromones.”

Pineapple’s face is simply an iPad, and its base is a system developed by Double Robotics, a company that designs robots for businesses. Dr. Lee has been programming the iPad to give Pineapple its functions.

Pineapple will be moving on its own soon, and even interacting with students in the upcoming research. It has GPS capabilities, camera and speakers. ith Dr. Lee and his team continually working to add new functions, Pineapple could learn many functions over the course of the research.

“Since this is a communications study, we aren’t just interested in the outcomes but also the process and how people get to those outcomes,” Boehmker said.

These interactions can be quite telling. Even Pineapple’s name is gender neutral as other studies have shown that the perceived gender of a robot will change how people interact with it.

“Robots are getting more intelligent, more sociable. People are treating robots like humans! People apply humor and social norms to robots,” Dr. Lee said. “Even when you think logically there’s no way, no reason, to do that; it’s just a machine without a heart. But because people attach human attributes to robots, I think a robot can be an effective persuader.”

So keep an eye out for our new friend Pineapple, and see how much it grows. Some of the student body will even be involved in the research and interact with it directly. Dr. Lee is also hoping to get a social robotics class for the Fall 2016 semester.