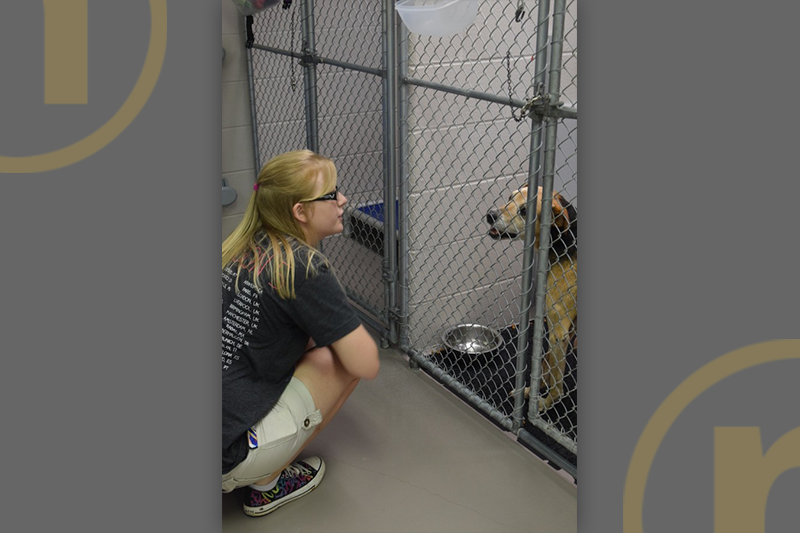 There are a dozen animal shelters in the Cincinnati area. Most are short staffed and in need of volunteers. Animals are abandoned, abused and forgotten.

“We are here to help people get involved in helping animals and work with something other than people,” Catherine Tuttle a volunteer and sophomore in nursing said.

Humans Helping Animals is a NKU organization formed to help animals in the Cincinnati area. The groups have volunteered at the Campbell County Animal Shelter, The Scratching Post, Clermont Animal Shelter and League for Animal Welfare (LFAW).

LFAW is the oldest non-kill shelter in the tri state area; they house up to 100 cats and 40 dogs.

“The Humans Helping Animals group is great to work with; we value this verging relationship,” Burt said.

Paddick has since transferred schools but her friends have carried on the program.

Ronnie Brown, a sophomore who began volunteering last year said there are more than 40 people on their email list and “six to ten people who go out almost every weekend.”

“I first came out because my dogs are getting older and I missed the energetic playfulness of a puppy,” Brown said.

“My friend started it, but I love helping the community,” Hamilton said.

Currently the group is focused on getting new members through the orientation process with LFAW, in Batavia, Ohio.

The group is young and met at various places last year. Last spring at a car show on campus Tuttle and her roommate went down to see the cars and ended up seeing the LFAW’s mobile adoption RV.

“The RV allows us to take pets for adoption to events,” Burt said.

An adoption counselor is onsite to match animals and adopt them to their forever homes. It is convenient to the future pet owners.

“The League was here on NKU’s campus. They told us all about volunteering and orientation, it was perfect,” Tuttle said.

A relationship was formed. Humans Helping Animals is focusing on involvement with the League for Animal Welfare.

“We are doing all we can to promote a no-kill community for the animals,” Brown said.

The League for Animal Welfare has been around for 65 years and welcomes the college volunteers and their energy.

“Taking the time to exercise the animals, tones energy down and they are more likely to get adopted,” Brown said.

Students also benefit from spending time out in the community helping in the shelters.

“We help both people and animals in the community,” Burt said.

Students help LFAW with pet care, handling on the mobile RV, and setup and takedown with events.

“We live on campus. We can’t have pets, this is an opportunity to get our puppy fix,” Hamiliton said.

The organization is one of few on campus that is ran entirely by students. They have no academic adviser.

“We can make all of plans on our own,” Tuttle said.

“The sale was a huge success,” Brown said, “We raised over $200 and signed up more students to volunteer.”

The group which is on Norse Sync meets weekly on Thursdays near the Student Union. Their volunteer dates vary but include most weekends.

“Volunteering outside of NKU helps open other service opportunities in the community,” Hamilton said.

Brown said that he hoped the group, “Helps the community open their eyes to animal welfare.”