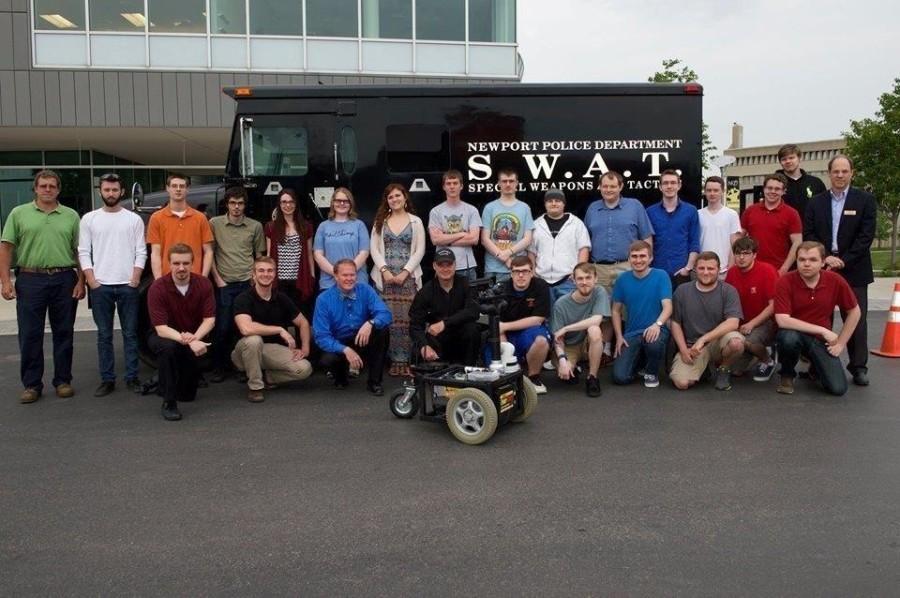 Students involved with the robot's creation. The robot was created by BIS 394 students.

One of Newport Police Department’s newest members is outfitted with some of the highest technology on the force.

A robot created by the NKU’s BIS 394 class joined the NPD on Aug. 4. The class used Raspberry Pi, a credit card sized computer, to help design a robot that will help protect the lives of officers in the future.

The project, titled N.O.R.S.E, which stands for Navigating Obstacle Rover Sonic Echolocation, made an appearance for National Day Out, hosted by Newport Police. The crime units and community got to check out its features and special effects.

The robot was assembled to accompany police officers to serve as an extra set of eyes, ears and hands. The robot has the ability to see using night vision and thermal vision. It also has an infrared camera and super zoom, making it impossible for a nearby suspect to hide.

In the event of an active shooter or other suspicious violent activity, the robot could investigate and look for the suspect. The officer would be inside his patrol car, operating the robot out of harm’s way.

Lieutenant Paul Kunkel of the Newport Police Dept. SWAT Team was really impressed with the little details incorporated in the robot and the security behind it. Despite the robot being so simple, he could see it being featured in a crime show like CSI.

“The great thing about it is it also introduces the idea of students giving back to the community,” Kunkel said. “There are a lot of opinions regarding police interactions, with something like this it strengthens the connection and shows commitment to the community.”

Kunkel said he couldn’t think of a better way for students to be involved with the community than by providing safety for its protectors.

Steven Hinkel, the professor of BIS 394, was surprised when his students approached him wanting to make a robot for police.

“It was so exciting because my students learned how to build and assemble the robot,” Hinkel said. “They were the ones who were doing all the work. Some nights we would be in class until 10 or 11 at night and I’d have to tell them, ‘alright guys we got to go home.’”

Hinkel covered all the funds from this project out of his own pocket, and the robot was created from the bottom up. He was thrilled when his students started working on it right away.

“One of the greatest thing with the robot was that it was a great outreach opportunity,” Hinkel said. “To see everyone responding so positively was great. There were even some students from other schools that wanted to get involved. Everyone seemed to love this thing. ”

The class is working on trying to find a way to fund the robot through the business informatics department so they can build more robots. They hope to potentially find a grant so they could have one on campus and be able to give some to the police units.

One student, Stacy Nichols, always liked to get involved with classes, which is why she joined the BIS 394 class.

“I’m not the type to sit back and let others do the work for me. I have to feel like I’m contributing,” she said.

Nichols enjoyed being in an environment where the students in her class shared the same dedication as her.

“The fact that we had so many brilliant people in our class that was able to get the robot so far, so fast, made the experience one of the best,” Nichols said.

Towards the end of the semester, last spring, the class had one final project to do with Raspberry Pi.

She noticed servers were left standing in line due to the high demand for cheddar bay biscuits. The servers don’t know if they’re going to be waiting two minutes or 10 minutes for the next batch to come out.

Nichols decided to solve the problem by creating what she called “the red button.”

“My design was a wireless button that syncs up to the oven and it’s attached to a little monitor right above the bread station that allows you to know exactly how much time is left until the next batch is ready,” Nichols said. “I was able to help out my coworkers and make their jobs and mine a little easier. I saw how much little things like these could help out in the long run.”

Frank Braun, department chair of Business Informatics, says this is just the beginning for the class; with the new computer, Raspberry Pi, anything is possible.

“My thinking of the project is we could build these robots cheaper than they could purchase them commercially and we could make a huge impact on the community, helping out Newport and Covington, and hopefully other places,” Braun said.

The new class BIS 394, called the Internet of Things, will create new projects. As a continuation of the robot, they will also work on enhancing it, and possibly building a second robot with new features that could further help police force.

“It evolved way beyond our expectations,” Braun said. “The limitations of what you can do with Raspberry Pi is really your imagination. The predictions for 2016 is that we’ll see more and more interconnectivity.We are exposing students to participate and develop something that could affect a greater cause and understand what it means going forward.”