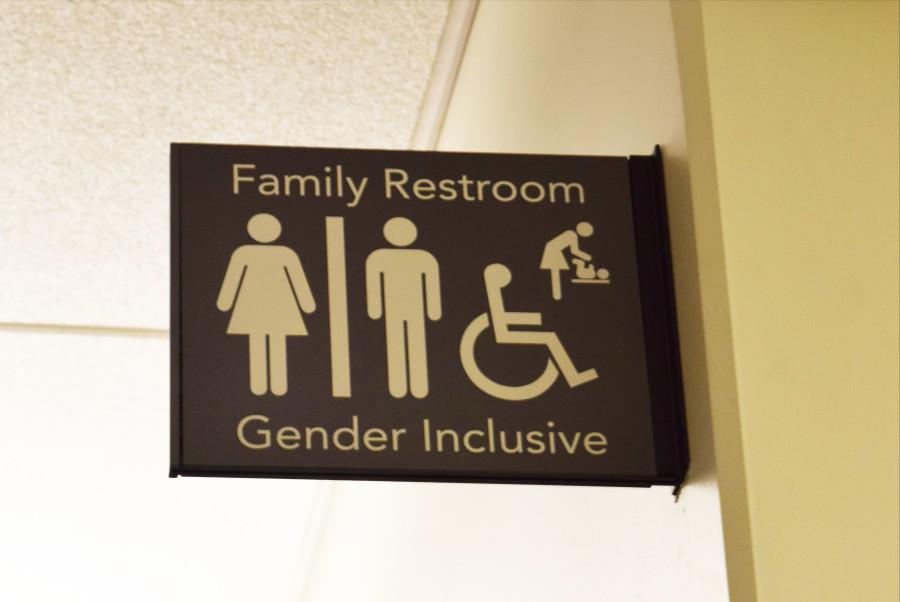 Gender Inclusive bathrooms are appearing more and more on campus. They are available for everyone.

Bonnie Meyer, the director of LGBTQ Programs and Services, says that the main goal right now is to ensure that inclusive restrooms are included in all new construction plans as well as buildings being renovated. Meyer also has a long-term goal to see these restrooms be included in other high-traffic areas on campus, such as the Student Union.

“To put an inclusive restroom in a building that is not already going through some serious construction is really, really pricey,” Meyer said. “Initially, you won’t see restrooms pop up in places like the Student Union, which is a high traffic student area. Certainly it is an area where we would love to see an inclusive restroom, but it’s not yet feasible.”

According to Meyer, one of the most brought up misconceptions while the SGA was working on this resolution is that they simply didn’t understand the purpose of single-use, inclusive restrooms. They thought that anyone would use any restroom.

“Certainly trans and gender-nonconforming students should use any restroom they identify with,” Meyer said. “The concern was that people just didn’t quite understand what we meant when we said we wanted more inclusive restrooms.”

The purpose of the restrooms, according to Meyer, really stems from the right for every student to be able to use a restroom that they’re comfortable using.

Ron Brookbank, a senior transgender visual arts student, believes the concern for the bathrooms lies in societal misconceptions and assumptions about the people that use them.

“I think the main thing is that people are concerned about the safety of female students,” Brookbank said. “I think that comes from a very sexist place. [Society] expects men to be more violent and more threatening. In reality, we [as a society] just need to hold them to a higher standard. If we combined bathrooms and made them gender-neutral, I’m not afraid of being attacked or anything.”

These facilities are not only for transgender or gender-nonconforming people, but for any person who may require a single-use, inclusive restroom.

“We have a lot of parents on campus with young kids. When I was an undergrad [single-use] facilities were what I was looking for when I had my children on campus with me,” Meyer said.

Brookbank said that having these restrooms across campus would remind people of why it’s important that transgender students have these spaces that ultimately make them feel more secure and accepted on campus.

“When I started going to school here, it was before I started hormones or transitioning or anything,” Brookbank said. “I felt very unsafe trying to use the men’s restroom and I knew that there wasn’t really anything in place trying to protect me or to educate anyone on why that’s an issue for trans people.”

In reality, people just want to go to the restroom and be comfortable doing so, Brookbank explained.

“It’s important that our students have restrooms they can use all across campus,” Meyer said. “It’s not fair for people to have to walk across campus to use a restroom and they should feel comfortable.”

Emily Watts, a sophomore sociology major involved in Common Ground believes that NKU is doing a great job at working towards being an inclusive environment where anyone can feel safe.

“Gender inclusive restrooms show students that life is evolving and equality is becoming real,” Watts said. “Nobody wants to be harassed or embarrassed for something they cannot control.”

NKU has come a long way over the past several years in terms of inclusiveness. The campus pride index, which is a national benchmarking tool that rates universities based on their LGBTQ inclusive policies, practices and programs was a 3.0 out of 5 when Meyer first arrived 3 years ago. The next year it shot up to 3.5, showing improvement. Meyer says that they’re waiting to hear back on the rating this year, but are hoping that it improves again.

Along with adding inclusive restrooms, NKU has expanded the LGBTQ Programs and Services office, several new LGBTQ organizations have made a presence on campus, and this year the office now has a mentor program, which has 20 mentors in total. There are more options for support wherever people may need it.

Meyer notes that there is progress to make in terms of making NKU a more inclusive environment.

One of the things being worked on now is making it easier for students to change their name, so they don’t have to go through obstacles to be identified the way they want to be.

“Name change is so important, so students don’t have to go through all these steps to change their name,” Meyer said. “Currently, they have to email their professor, which outs them, and we need to fix that.”

Brookbank hopes NKU has more spaces for students who have been discriminated against or have had to face violence.

“We have the LGBTQ center, which is really awesome, but I would like to see them do more with assault and discrimination on campus,” Brookbank said. “I would like more social workers to be available so there’d be more places to talk about what’s happening on campus.”

Watts would like to see organizations like Common Ground expand in their reach, bring more speakers in to talk about the problems that face LGBTQ youth and put on more events.

“I also hope to see more acceptance from students,” Watts said. “Most students, I feel, are very indifferent to the issues [facing LGBTQ people].”

According to Meyer, trans issues have been at the forefront of conversation and the issues are becoming better known to the general public.

Notable transgender people, like Laverne Cox, Caitlyn Jenner and Janet Mock, have brought public attention to the issues facing the trans community. In effect, there is more awareness brought to these issues.

“More and more trans folk are feeling safe being out on campus. We have more trans students feeling comfortable talking about their experiences,” Meyer said.

The gender inclusive restroom signs are just part of what is making not only NKU, but several other campuses who are taking similar initiatives, a safer and more accepting place for students of all identities.

“The [gender inclusive restroom] signs  are important because it’s a reminder,” Meyer said. “If you’re a trans person on-campus and you see that your campus is taking initiatives it helps tremendously.”