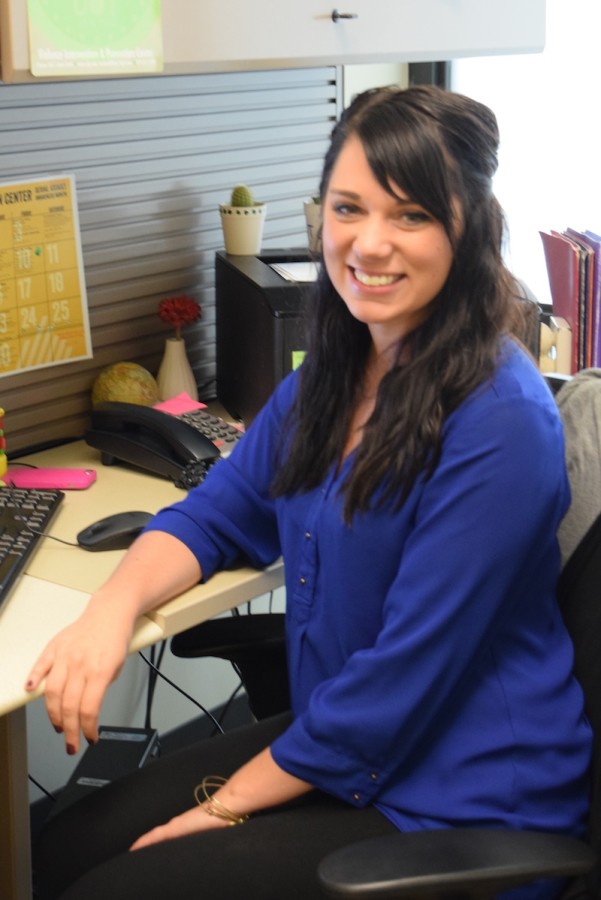 Gabby Molony sits at her desk. Molony is the Norse Violence Prevention coordinator.

On Aug. 31 it was reported that a female was sexually assaulted by a male acquaintance, whom she met through university housing, according to NKU police reports. This occurrence is not isolated nor is it a problem only on NKU’s campus, according to the Norse Violence Prevention Center.

NKU is taking measures through the Norse Violence Prevention Center to give students who face sexual abuse on campus a voice, as well as preventing future incidents.

The issues of personal-power based violence, which includes stalking, rape, molestation, child abuse, and partner-based violence, are being targeted by the Norse Violence Prevention Center. The center is relatively new to campus as it officially opened in September 2014.

“The purpose of NVP is to bring campus-wide awareness to all avenues of personal power based violence,” said Meagan Card, the Executive Vice President of the NVP student board.

“So many people are so nervous about the subject of abuse that they don’t know where to begin,” Card explained. “Our main goal is to spread awareness of how prevalent abuse is on a college campus so that women and men alike can be safe and happy on our campus.”

In order to support victims that seek out the center for help, the center advocates for them among hospitals, courts, and law enforcement; they also are there for academic support, according to the NVP coordinator on campus, Gabby Molony.

“Often times when students experience these forms of violence, it impacts a lot of different things in their life,” Molony said. “[The center tries] to help manage that stress and anxiety that goes along with managing what they’re going through.”

Students are also able to reach out to other students in both support and education through the program. According to Molony, in the year and half they’ve been a presence on campus they have trained around 4,000 students, faculty, and staff. The more educated and aware people are, the more violent acts that can be prevented.

“I feel like it gives students an opportunity to find their voice,” Molony said of student involvement in the center.

The center has a myriad of programs with the purpose to educate and raise awareness about these forms of violence so that the entire campus can work together to prevent such acts. Some of these programs include Green Dot, Take Back the Night, and Survivor Speak Out. Card also pointed out to watch out for April, since its Sexual Assault Month, most of their biggest events happen at this time.

“I really want to prevent these things from happening in the first place,” Molony said,”I found that as a college student that [personal-power based violence] was happening more frequently than I ever realized.”

“I believe that NVP will shape our campus as one of the future,” Card said of NVP’s presence on NKU’s campus, “[The center is] aware that sexual assault and domestic violence are real and we aren’t going to allow slut-shaming or ‘she/he was asking for it’ mentalities.”

“I am proud to say that when I walk down the halls of my school that I feel safe because of the center and what it is working towards,” Card said, “I am not afraid for my friends or myself.They know how to handle situations because the center is so easily accessible.”

Card wants her fellow students to know that she, along with the rest of the NVP team, are working to end power-based violence. The center is there not only to provide a haven for victims, but to prevent others to falling victim as well.

“All I ever wanted in life was someone to support me when I went through my own sexually abusive relationship, and even though I didn’t receive it, that doesn’t mean that others shouldn’t,” Card said, “In fact, it pushes me towards making sure every victim gets the help they need.”

If students want to get involved, the first meetings are projected to begin in late September. To get updated on the time and place of the meetings, as well as what events are coming up, like NVP Center’s Facebook page. Gabby Molony’s office is located on the third floor of the Student Union in room 304.  More information, including how to get in contact with the center, can be found at nvp.nku.edu.