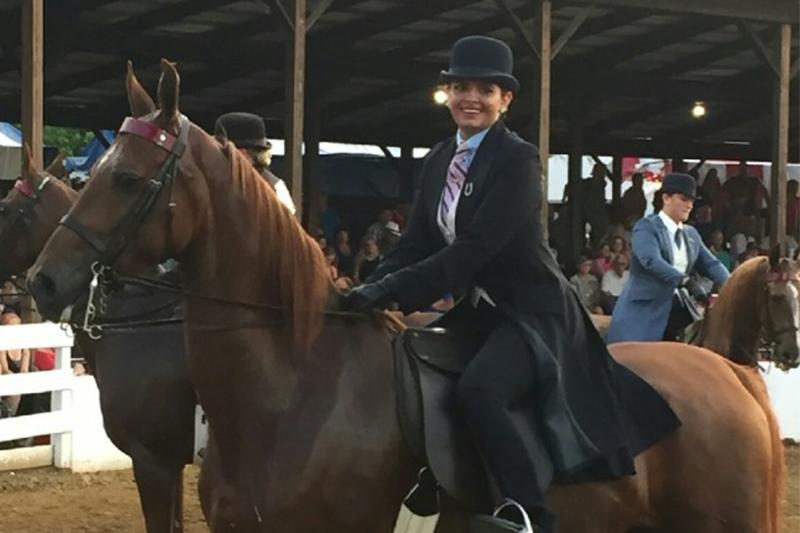 Students interested in horseback riding who do not own a horse, or have never ridden before, need not be discouraged. The Northern Kentucky University Equestrian Team welcomes any student interested in working with horses. Members are not required to compete but are able to take riding lessons. Members must have four lessons prior to competing. The instructor will determine what level is appropriate. The team will be competing in 18 shows this season. The equestrian team does not require members to own a horse, as riders are not allowed to compete on their own horses. Lesson horses are brought to competitions and a lottery system determines which horse will be ridden. Members can ride English, Western or both. There are also various styles, such as hunt and saddle seat. “I want to get the word out because a lot of people who come to NKU don’t know we have an equestrian team,” member Joann Chauvin said, a senior majoring in communications studies. “Lindsay Bosse started the club in 2008,” Chauvin explained. “She used to be my [riding] instructor. She got me involved when I was a senior [in high school] so I knew coming in as a freshman I definitely wanted to join.” Chauvin joined the equestrian team in 2011, and has since served as president, secretary and, this year, as safety officer of the team. This will be her first year riding English, stating she is “just trying to get that other perspective.” Chauvin’s goal is to become the largest sports club on campus, while also holding the title of the most expensive club. Currently they have 28 members. Membership dues are only $20 per semester; but riding lessons can range from $25 to $32 per lesson, depending on what style you choose to ride. There are also association dues and competition fees that add up. “We don’t want to turn people away because of money,” Chauvin said. She discussed encouraging members to try to find sponsors for help with costs. “It’s a lot cheaper to ride through the club and you gain more experience. You’re not riding one horse for four years, you are riding multiple horses, gaining that confidence,” Chauvin added. Member Yvonne “Eve” Smith, a senior history major, explained the average cost of a private riding lessons outside of the club could cost $50 and up. Shelby Scarf, a senior majoring in communication studies, is planning to join the Equestrian Team. Originally from Gladbrook, Iowa, she lives on campus and has a horse at home. “I grew up around horses so I always wanted to compete, but the most I could do in my small little town was be in 4H,” said Scarf. “I actually didn’t know about this club until my sophomore year, but at that time, I didn’t have the money to join, so I worked over the summer, saved up enough money and I decided to join this year.” Scarf also said that she wants to join the equestrian team to learn more about horses and competing. She is also looking forward to making friends with similar interests. “We just want to get people on the horse,” Chauvin explained. “Once you are comfortable with it and you feel good enough about yourself, it will be a confidence booster. Once people have that confidence on the horse, even if they are only on it for one lesson, one semester, they take that with them.”