Capturing the sound: Along the Shore 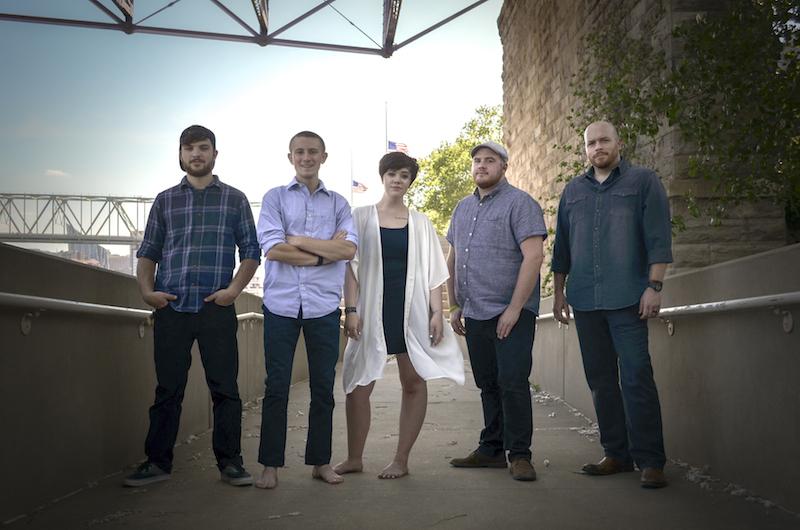 Along the Shore poses for their photo shoot. Their EP release is Sept. 10.

Walking into St. John’s Congregational church with instruments and amps in tow, Along the Shore begins their typical Sunday afternoon in band practice.

After setting up their equipment, singer Claire Martin sways with microphone in hand while guitarist and NKU alum Kyle Rhodes strums his guitar along with other guitarist Branden Meade. NKU students, drummer Chris Bishop and bassist Drew Conroy, begin the heartbeat of the first song of the day, “Smooth Me Over.”

The journey to reach this day took time and new friendships through the gain and losses of band members.

“I started the band six years ago,” Rhodes said. “We were around for about two years, put out a record and then decided to take a little break. I had just started my sophomore year at Northern, I believe, so I was doing that… In that break time, our bass player and I started writing the more folkier tunes… We needed a singer so our new drummer at the time brought in Claire.”

Claire Martin joined the band in 2012 and stayed for six months with the band. Following that, Rhodes and Martin became a duo for three months before deciding they wanted to start a band again and found Bishop and later on reached out to Meade and Conroy.

The current band has been going strong since January 2015.

After being asked if the band liked the new dynamic, Rhodes replied sarcastically, “Absolutely not!”

Through their time as this specific band, they’ve made many memories–funny, touching and “full out dumb” according to Martin. Rhodes chose to tell the touching one first.

“So I’m in Target and I can see this lady from afar just looking at me and finally I pretended I had a phone call and walked away, but she stops me and asks if I play in the band Along the Shore,” Rhodes said. “And I said, ‘Yes, yes I do.’ She said that she listened to “Empty House” like five times and listened to it daily… It was a constant motivation for her because she was going through a lot of things and Claire’s lyrics pushed her to get out of the funk. She cried in front of me and I cried in front of her.”

Rhodes went on to say that that moment meant a lot because it showed that they made an impact.

Martin told her story of breaking the drum at the end of an encore performance of their song “Smooth Me Over.”

One of the biggest moments for Along the Shore will come with their EP release show.

The recording began in March and they didn’t finish until August, but the band said it was the best part because they had so much time to work on the EP.

“Where we are now is the sound I’ve always wanted,” Rhodes said. “And I think we captured it.”

For the official EP release, the show will be a charity event paired with the Brighton Center called Stop, Rock and Bundle.

Along the Shore’s EP release show will take place Thursday, Sept. 10 at 8 p.m. at the Southgate House Revival. Attendees can bring gently used coats, sweaters or gloves that will be donated and will receive 50 percent off their ticket. Van Strantz and Daphne & The Mystery Machines will open the show.

The link to the “Empty House” Music Video: https://www.youtube.com/watch?v=1Fy3Vvzj2Jc