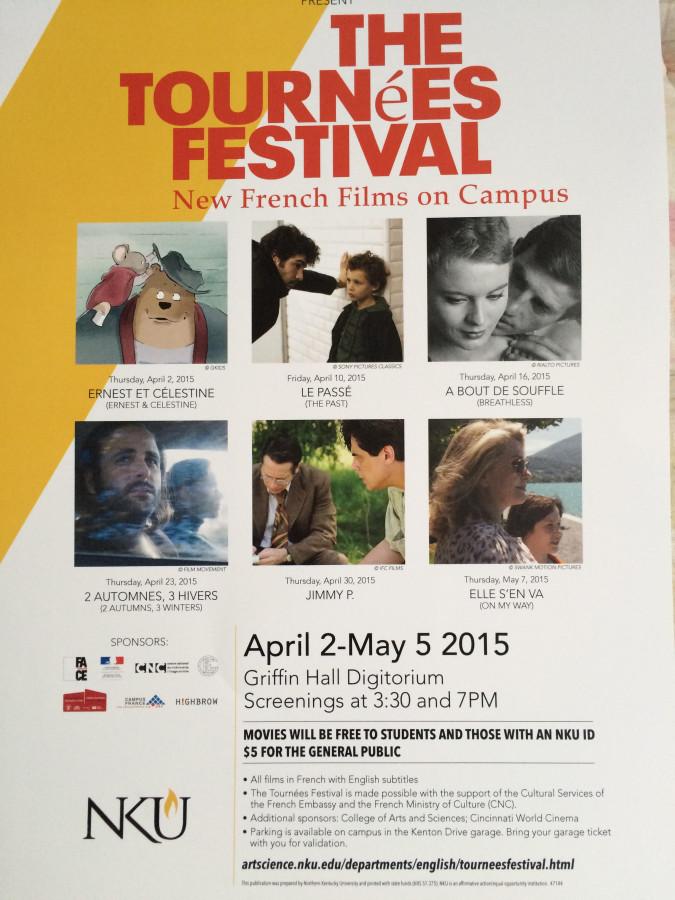 The festival has two more films to show before wrapping up.

For the past four Thursdays, and the next two, Griffin Hall’s Digitorium has been home to The Tournées Festival, a celebration of some of France’s top contemporary films and directors.

The festival, which has been on campus the past five years, was brought to NKU via grants from the French American Cultural Exchange.NKU has been chosen each time they applied. A team of faculty members narrowed down a list of roughly twenty French films, until they found six they wanted students to experience.

Thursday April 30, the festival will premiere Jimmy P., the only French film at the festival in English, as opposed to French with subtitles. The movie follows the real story of a Blackfoot Indian and World War II veteran struggling to understand his paralyzing headaches and blackouts, and the anthropologist turned therapist who guides him.

The following Thursday, May 7, will show Elle S’en Va (On My Way), starring Catherine Deneuve, an iconic French actress, a former beauty queen well past her prime, who drops everything for a road trip after learning her husband has given her up for a 25 year old. Both films will have showings at 3:30 p.m., and then again at 7 p.m their respective days.

Dr. John Alberti, Director of Cinema Studies at NKU, has been in charge of putting everything together for the past five of six years the school has hosted the event.  He says the last two movies he chose were intentional to fall in line with finals.

“This week, the movie (Jimmy P.) is a little more intense with psychoanalysis and trauma, which sounds like finals week,” Alberti said. “At the end of finals week, it’s a fun roadtrip with beautiful countryside, wine, sex, a charming kid… it’s a great way to decompress.”

The Tournées Festival is free to any student and anyone with an NKU ID and open to the general public for $5.  Following the showing, a faculty member will lead a 15 minute discussion about the movie, helping the audience dissect and understand what they watched.

Following this year, NKU will be on a three year hiatus from being allowed to host the festival. Alberti says this is so one school doesn’t bogart the limited funds of the grant, giving other schools the opportunity to grow.

Alberti sees the movies as a free, accessible and easy way to bring NKU students and people from all over the city to campus for a movie going experience.

“In the 2010’s you don’t have to go to a movie theatre to see a movie,” Alberti said. “You can find most of what we show online. But the Digitorium has made it worth coming to see the movie in this setting.”