The show behind the curtain VIDEO 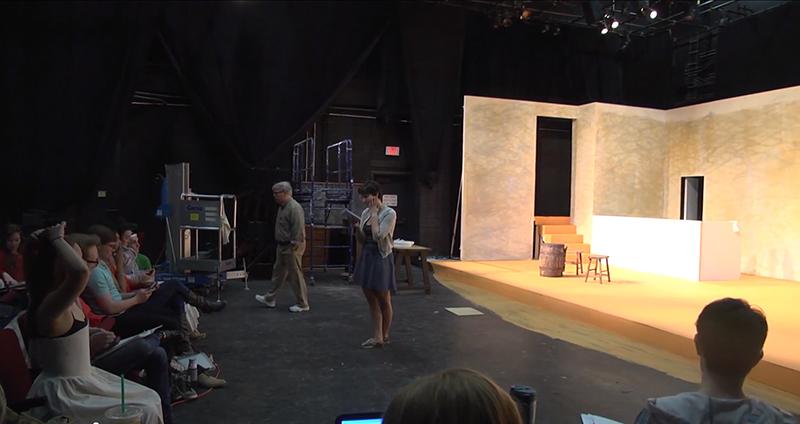 Stage manager Meredith Russell addresses her crew. Life behind the curtain is constant.

Musical productions here on NKU’s campus are known for their worthy applause, but the applause should also be directed towards the show that takes place behind the curtain every night, six nights a week.

Stage managers have many responsibilities, all of which require them to keep every detail running smoothly, to the best of their ability, at all times.

Needless to say, the managers have many stories to tell.

Meredith Russell, theatre major and stage manager, is not only a full-time student, but  also incorporates anywhere from 30 to 40 hours a week behind the scenes into her schedule.

“Basically, the job of a stage manager is the center of communication. Every artistic decision is put through the stage manager and then filtered out to everyone who needs to know,” Russell said. “No one else knows more about the show and the different entities that putting on a show entails than the stage manager.”

Shauna Nelsons, also a stage manager at NKU, finds her job more than interesting, to say the least.

“I’ve had to do some pretty weird things,” Nelsons laughed. “One time, I had to work with this like eight-foot-tall chicken puppet that I had to help assemble, and then I had to put little kids dressed as chicks into every performance; that was always interesting. I’ve also had to prepare food, soak body parts in fake blood, and even poke eye holes in a donkey mask.”

Even though these tasks seem interesting to the staff, they will be the first to admit the pressure still lingers.

“I would definitely have to say the stress is the best part, you know?” Tory Hutchins, assistant stage manager, said.“You always have to be on your feet,  and be on the lookout to make sure everything is working out accordingly.”

“It’s a whole different tempo. Here you actually have to participate and interact or your butt is on the line,” Hutchins laughed.

Russell, Nelsons and Hutchins all have learned to be interactive with their production crew, but even with that being said there is still work to be done behind the computer screen and desk.

“Stage managers have quite a few responsibilities, which is why we have A.S.M’s [assistant stage managers] to help take care of some of those things,” Nelsons said. “Stage managers are constantly doing some sort of paperwork. We update it daily. “

Without the constant communication between the cast and the stage manager behind the scenes daily, the productions wouldn’t flow as well as they typically do.

“Another thing that happens every single day is posting the daily call. The daily call gets posted on the callboard and emailed to the cast to let them know what to expect for their next rehearsal. It is extremely important this gets done at a reasonable time day-to-day. We also send a lot of emails to cast members and the production team. It’s like having a full-time job,” said Nelsons.

Despite how stressful the to-do list may be, Russell explains that the magic at the end just cannot be described.

“My favorite part about being a stage manager is when you are sitting in rehearsal, and an actor hasn’t been working well at all, and something suddenly clicks, then all of a sudden all of these things that you have been watching, struggle-bussing all the way through, just become perfect,” Russell said.

According to both Nelsons and Russell, there’s nothing more satisfying than the effect that all of their hard work has on the audience.

“There aren’t a lot of things better than having a successful opening and run,” Nelsons said. “It always makes me really happy when I hear the audience reacting to what’s happening on stage, whether I can see it or not. It feels so good when everything comes together and you’re left with a final product that you’re really proud of. I think that’s the best part.”

Even though a successful opening and run soon comes to an end, the hard work that they produced is still a lasting memory.

“I love it when a que lands perfectly,” Russell laughs.  “It’s magic because you, as a stage manager, are sitting there, and you know you made all of it happen. It is so real and so tangible; so perfect.”